The Last Thing Mary Saw – a Shudder original movie for the AMC Networks’ premium streaming service for horror, thrillers and the supernatural – was shot using Cooke Optics S7/i Prime Lenses so that cinematographer David Kruta could capture the exact skin tones and color needed to deliver beautiful images to the audience.

The Last Thing Mary Saw takes place during the winter of 1843, in which a young woman is under investigation following the mysterious death of her Calvinist family’s matriarch. Her recollection of the events sheds new light on the ageless forces behind the tragedy. Released in the U.S. on 20 January 2022 on Shudder, the film stars Rory Culkin, Stefanie Scott, and Isabelle Fuhrman, and is written and directed by Edoardo Vitaletti, making his feature length film debut.

“From the beginning, The Last Thing Mary Saw gives the sense of impending doom,” said Kruta. “The environment…the nature around the house and the religiously oppressive family is overbearing. There’s a storm brewing on the horizon, literally and figuratively, manifesting itself in cloudy skies and rigid composition, as though the frame was a prison, mirroring the emotional and familial situation.” 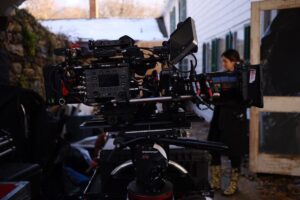 “Very often, scenes would be lit with only a handful of real candles,” explains Kruta. “AbelCine gave me the opportunity to test real flame as well as LED lights, and different sets of full-frame lenses to give me the right quality of flare and consistent, fast T-stop so that the color would look great and that post-production would have a nice, dense negative to work with.”

While Kruta has always been a fan of Cooke lenses, owning his own set of Cooke Anamorphic primes – plus having used the S4/i lenses, S4/i Minis, Panchro Classics, and original Panchros in his career – he still did his due diligence when lens testing. Kruta’s go-to S7 lens was the 50mm. “It’s as close to a 35mm or 40mm on Super 35 and I just really like that focal length.” 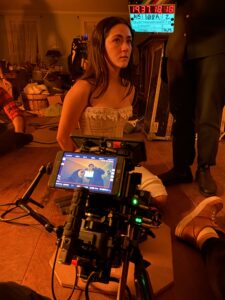 “It always came back to the Cooke S7s and how they render skin and color. On top of that, I like the focal length range,” said Kruta. “But what it really came down to was the stops: The S7s not only have fast stops but maintain quality with stop consistency throughout the range. That gave us a great look for the project.”

While shot with minimal camera movement, 95% static, according to Kruta, The Last Thing Mary Saw has been called “beautifully photographed,” by Evan Dossey of the Midwest Film Journal.

“While this was a smaller project than I was looking for, my agent insisted I read the script and I loved it,” said Kruta. “I also watched Edoardo’s short film God Is Busy Somewhere Else, and it was obvious that he had great vision. We met and immediately hit it off.”

When meeting with Vitaletti, Kruta would only reference paintings for the project. “What I like about Edoardo is that he can hop between general concepts and specifics. He definitely knows what he wants, but is also very open to ideas from collaborators and their expert advice – such as those from production designer Charlie Chaspooley Robinson and costume designer Sofija Mesicek, who were both integral to the look and great to collaborate with. I told him how I read the script, told him my visual ideas, showed him some paintings that I referenced, and he agreed.” 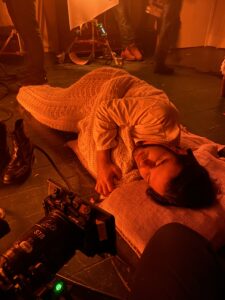 Lighting with candles, Aputure MCs and, when needed, a Joker 1600, Kruta faced a challenge with one specific scene. “One day, for a long interior daylight sequence, we had the entire cast which adds up costs very quickly. We had about seven hours of daylight, as it was December. For that day, I rented additional lighting, diffed the windows and shot inside all day. And, of course, the S7s were perfect. I love the way that they render skin and color the way we wanted them to and it shows in every shot. My favorite thing: I don’t like a too natural forced look. I want it to look like a movie with a heightened or different reality.” 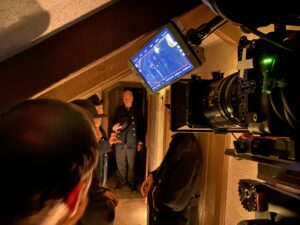 “I would love to use the S7s again. Although S7/i’s are bulkier than most Full Frame lenses. That was not a determining factor when shooting this project without much camera movement. It was already agreed to be a more statically photographed project.  They are great lenses.”