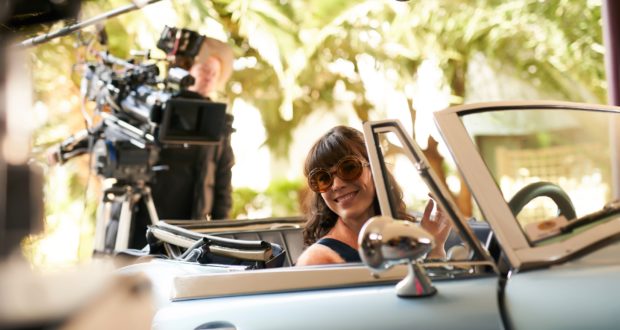 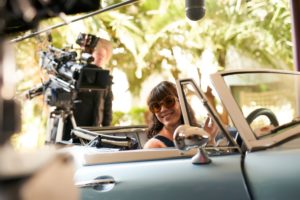 Geraldine Hakewell as Peregrine Fisher, in front of the cameras and behind the wheel of her sports car, in Ms. Fisher’s Modern Murder Mysteries. (source: Every Cloud Productions)

Every Cloud Productions’ Ms. Fisher’s Modern Murder Mysteries, the Australian television series which had its US premiere on Acorn TV’s streaming service this April, is both an ultra-stylish detective show with a deceptively light touch and an ode of the “swinging 60s.” As the title indicates, it’s a spin-off of Miss Fisher’s Murder Mysteries, which became a major international hit when it debuted in 2012, airing in over 100 territories and becoming one of Australia’s most popular TV exports. (The series made its US debut on PBS.) Based on the novels by Kerry Greenwood, Miss Fisher’s Murder Mysteries centered around Phryne Fisher (Essie Davis), a liberated woman and heiress who used her inherited fortune to become a private detective, solving crimes and righting social injustices in the Melbourne of the late-1920s.

Created and produced by Deb Cox and Fiona Eagger (who founded Every Cloud Productions and also created the earlier series), Ms. Fisher’s Modern Murder Mysteries stars Geraldine Hakewell as Peregrine Fisher, who Eagger describes as “the niece of the original Miss Phryne Fisher who inherits her famous aunt’s lifestyle and wealth after Phryne goes missing over the highlands of New Guinea. Though the two never had a chance to meet, Peregrine evokes the same spirit, sense of social conscious, and love of fashion as her famous aunt.” Peregrine decides to follow in the footsteps of her aunt as a private detective, aided by Birdie Birnside (Catherine McClements), leader of the Adventuresses’ Club (a society of professional women), and Detective James Steed (Joel Jackson). Steed’s immediate superior Chief Inspector Percy Sparrow (Greg Stone) is a corrupt, sexist police official who’s at constant odds with the Adventuresses’ Club. (Sparrow disparagingly calls Peregrine “little Fish.”)

Ms. Fisher takes place about four decades after the original series, in the mid-1960s. Eagger explained to me the rationale for that setting. “While creating the new series, we were very excited about exploring a new world and a new era of women’s liberation. Like the 1920s, the ’60s provides an incredibly fertile story world for political and social change. The freedoms afforded to women in the 1920s were largely reined back following World War II, and it wasn’t until the 1960s that society began to open up again and call for change. There is a natural synergy between the two periods. The 1960s era also has a similar potential for glamorous style and outrageous fashion that Miss Fisher is known for.”

Speaking of the 60s, the name of Ms. Fisher‘s male lead James Steed suggests a tip of the hat to what many people consider to be the ultimate swinging 60s series The Avengers, which ran on UK television from 1961 to 1969. (ABC imported the show to the US for its last three seasons). The Avengers, which starred Patrick Mcnee as British Intelligence agent John Steed, was a groundbreaking series in its depiction of Steed’s female colleagues, first Cathy Gale (Honor Blackman), followed by Emma Peel (Diana Rigg), in that they were not only smarter than Steed (both women had science degrees), but they were also the ones who usually engaged in fisticuffs with the bad guys. (The women were martial arts experts as well.). Eagger confirmed the connection between the two series. “Detective James Steed was indeed a deliberate homage to the 1960’s TV series The Avengers,” she told me. “He’s a competent detective in the midst of a lazy police force, but he continues to be hardworking and diligent despite his frustrations. Steed is a character committed to remaining optimistic about administering the law, Peregrine’s fighting spirit and dedication to justice makes them a mighty team—that is whenever they manage to agree on things. The witty dialogue, the fun and tongue-in-cheek elements of The Avengers were all aspects we drew on. Cathy Gale’s wardrobe inspired our wardrobe for Birdie Birnside.  The character of Emma Peel was so delightfully cheeky, and a great touch stone for Peregrine.”

For a series with a feminist perspective, it’s no surprise that Every Cloud has made a point of employing women in key positions; three of the first season’s four episodes have been directed by women and the series’ DP (Director of Photography) is Kathy Chambers. “At Every Cloud, we pride ourselves on delivering finely crafted well scripted female led content,” Eagger said. “Every Cloud have been a strong advocate for female representation in front and behind the scenes of the screen industry, delivering female-led content for international audiences so indeed it was a deliberate choice to give a strong female character a voice via brilliant female filmmakers. Our good friend, the talented Kevin Carlin directed a telemovie [the series’ second episode “Dead Beat”] and did a fabulous job as well, it’s really all about being inclusive.” 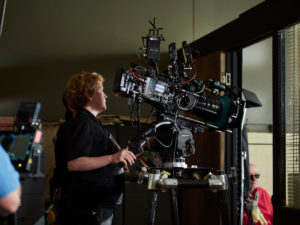 DP Kathy Chambers lives and works in Melbourne, Australia. “I’ve worked in the film and television industry here since finishing film school sometime last century,” Chambers said to me. “I began my working life, first as a clapper loader, then as a focus puller, and then an operator on feature films here in Melbourne. After our kids were born, I gravitated to second unit work on TV shows, including Secret Life of Us, City Homicide, and Wentworth. In 2015, I took over as DP on Wentworth. Since then I’ve been shooting series television in Melbourne.”

I told Chambers I thought that, like the original Miss Fisher series, Ms. Fisher’s Modern Murder Mysteries has a cinematic look to it as opposed to a standard television series, and asked how she achieved that. “It’s very kind of you to say Ms. Fisher has a ‘cinematic look,'” Chambers responded. “I’m glad you think so, and so will Fiona Banks, our set-up director for the show. I guess it’s a matter of balance. Obviously we are on a TV schedule here, not a film one, so we need to be pragmatic about how often we say ‘lay a 100′ of track here,’ and let the dolly do its job. There’s a lot of coverage needed on a show like Ms. Fisher. The directors and the editors need options when they’re playing with the comedic rhythms of a show like this. That can mean that, some days on the set, we are constantly using two cameras just to get through the page count. These are not your 100′ track days! Like most things in TV, it’s a collaboration. In pre-production, the director, the first AD, and I work out where we can afford to be a bit more lenient in the schedule, and then it’s my job to stuff as much filmic content into those precious moments. It nearly always coincides that the more complex material gets the extra time and, therefore, the more filmic approach. I imagine my early years in features helps here. I think my native tongue is ‘filmic’ and now I have the speed of television. It’s a pretty good combo, I think.”

I then asked Chambers what were the challenges and requirements for the cinematography that are unique to this series as opposed to other series she’s worked on. “There were some fairly stark differences between Ms. Fisher and the job I had just completed, which was Season Seven of Wentworth. Wentworth is shot almost entirely on a set, whereas Ms. Fisher is shot almost entirely in real locations. For example, The Adventuresses’ Club is a heritage-listed building. People trusted us with their precious renovated 60s houses. The main challenge with these locations is the time it takes to do common jobs like erecting velvets to allow us to shoot night-time interiors during the day. The large windows at the Adventuresses’ Club were particularly time-consuming due to the stucco surrounding the windows. The care taken when securing the velvets is very important. It’s part of our job to make sure we are allowed back in those locations next time, so we take this responsibility very seriously.

“I guess our other biggest challenge was shooting 1964 Melbourne in 2018 Melbourne. In pre-production, there were long discussions about what could or couldn’t be seen on screen, what was or wasn’t ‘of the period.’ It means you can’t just pop outside and do a day exterior. Everything has to be much more controlled for this type of production. Our production designer Ben Bangay and his team did a fantastic job of supplying ‘things’ that could be used to block out modern scenery. Things like cars, trucks, and fake brick walls!”

Speaking of the series’ 60s setting, Ms. Fisher does such an excellent job of capturing the look and feel of the period that I was curious if Chambers and her team were influenced by the movies and TV shows of the 60s. “It’s a funny thing but when we first started looking for reference for the Modern take on Ms. Fisher, we all imagined it would come from TV and movies of the 60’s. Once we started trawling through things, though, nothing really jumped out at us. It quickly became apparent to Fiona Banks and I that the fashion and the architecture were dictating the style. We wanted it to be light and bright—almost a reflection of how we look back at that whole period rather than any specific reference to anything made in the 60’s.” Chambers then added as a disclaimer, “We did not regret the time spent watching Get Smart and The Avengers”

Chambers also took time to go into detail about the equipment her team used. “We shot Ms. Fisher on the Arri Alexa Cameras System supplied by Panavision in Melbourne. The kit contained two Alexa XTs and one Alexa mini which remained, almost exclusively, on the Ronin. We shot in 2K 444. The kit also contained a fantastic set of Panavision Primo Lenses including the 24-275 zoom, the wide angel 19-90mm zoom and a set of Primo primes ranging from the 14mm through to 150mm.”

In conclusion, Chambers offered her own take on the recent advancements female artists have made in a previously male-dominated industry “It is indeed encouraging to see more women working behind the camera in recent years. I think diversity, in all its guises, is only a good thing in life. Ms. Fisher is a perfect example of the changing landscape. On our show, we were surrounded by female HODs [Head of Departments] and it was really nice.”