The Mystery of Wireless Microphones

Anyone who has worked with wireless microphones in different locations has probably run into mysterious problems along the way. Maybe it’s interference, dropouts, noise, lack of power or some other annoying issue. When you’re under pressure, the last thing you want to do is delve into the oddball world of wireless microphones.

When they work, wireless microphones are very convenient. But when they malfunction, they can generate major problems. As the world is increasingly crammed with interfering devices, using a wireless microphone system can easily turn into a minefield of problems.

Like everything technical, some basic knowledge and experience is necessary if you are to successfully navigate wireless problems. Preparation for use of a wireless mic system should be a bit like going through a checklist before flying an airplane. Do the right prep and you are less likely to have problems.

If a wireless system doesn’t work or is spotty when you first turn it on, check the batteries. Use a tester to make sure they are at full strength. Also be sure the battery terminals are clean and making good contact with the cells. You’d be surprised how often batteries are the cause of trouble.

Once the wireless system is working, a common problem is outside interference. This is why professional wireless operators always use channel coordination in preparing for important wireless gigs. It is important to choose an open channel not being used by transmitters at your location. 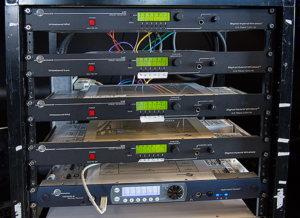 Local television channels are a frequent villain and can cause havoc with wireless microphones. A “local” TV channel can be in a radius of about 60 miles around your site. Be sure to check in advance to make sure you are not on the same frequencies being used by nearby television broadcasters.

Avoid what is known as frequency crowding. This is caused by competing devices too close to your system. Crowding of frequencies can cause intermodulation distortion. The best way to prevent this is to ensure your own wireless devices are at least two megahertz or more up or down the chain from competing devices.

This is where diversity antennas are useful. By having antennas in a couple of locations, the system will sense the better signal and use it. This can eliminate multipath interference.

It is also important that antennas are placed in the line of sight. Nothing should be between the transmitter and receiver. To be prepared for all contingencies, it is best to have both directional and omnidirectional antennas in your kit. Depending on the location, these antennas can help overcome unique problems in a space. 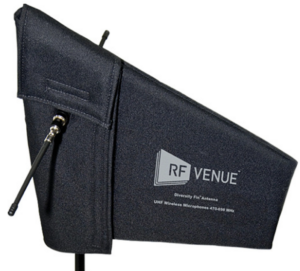 Another common wireless issue is blockage of the signal. Signals can be blocked or absorbed by metal, wood, concrete and even a human body. The answer to this is to use a better antenna that’s placed to allow a clean, straight signal.

Another kind of wireless interference is noise and static. If you have this kind of problem, first check to make sure the frequency is clean and without outside interference. Turn off any devices close to the receiver that can create noise. These include mobile phones or other nearby wireless devices.

If the transmitter you’re using has a whip antenna, make sure the antenna isn’t bent. Sometimes an antenna can be positioned in a way that causes a noise problem.

Also, check the mic system for proper gain setup. If the gain is too high, it can cause distortion. If the gain is set too low, poor signal-to-noise ratio and reduced performance becomes a problem.

Sometimes, the person wearing a wireless transmitter can cause a problem. Issues like intermittent muting or unmuting the transmitter can be accidentally triggered when the wearer of the device inadvertently hits a button. The answer is to lock the power switch and other critical settings when the transmitter is placed on the speaker.

While very convenient, wireless microphones can be exasperating when problems pop up. The way to minimize them is to go through a checklist before each use. Always check the frequencies, batteries, antennas in advance and always be prepared for the worst to happen.

Sometimes, there are great mysteries and no way to make a wireless mic work in a venue. In this case, do what the pros do. Find a microphone cable and plug in a wired microphone. That always solves the problem.