Zulu
THE BEAT:
Home » Featured » The One and Only, Robert De Niro Opening Keynote #NABSHOWNY 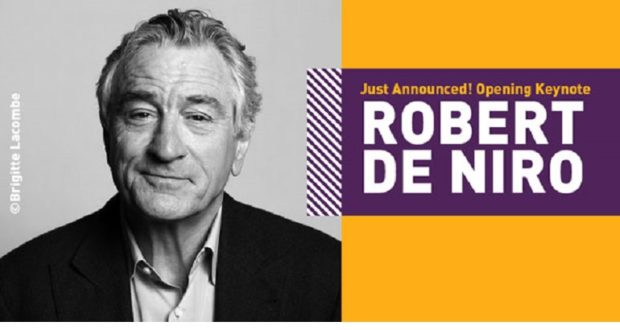 The One and Only, Robert De Niro Opening Keynote #NABSHOWNY

Robert De Niro (need I say more) will be headlining the 2018 Show Opening at NAB Show New York. De Niro is a legend of the production world (both in front of and behind the camera) totally solidifies his decades of experience in the entertainment industry. De Niro’s fireside chat will be moderated by Dade Hayes, Contributing Editor- Deadline Hollywood that will have Q&A centered around the future of film and entertainment making for a dynamic keynote open experience.

De Niro, the Academy Award winning actor for various iconic movies including “The Godfather, Part II.” in 1974 for Best Supporting Actor and “Raging Bull” as Best Actor in 1980, has immediately impacted the film industry with his immense style and pure feeling that he brings to character. Robert De Niro launched his motion picture career in Brian De Palma’s “The Wedding Party” in 1969. By 1974 he had also won the New York Film Critics Award for Best Supporting Actor in “Bang the Drum Slowly” and from the National Society of Film Critic for “Mean Streets.”

De Niro also has earned Academy Award nominations for his work in: “Taxi Driver,” “The Deer Hunter,” “Awakenings,” the remake of “Cape Fear” and “Silver Linings Playbook.” De Niro’s next project “The Irishman” in which he stars, and is producing with long time friend Martin Scorsese will be their ninth collaboration together and will surely be Netflix’s next top featured cinematic deliverable.

“Robert De Niro is a legendary actor, producer and director whose work spans decades and genres,” said NAB Executive Vice President of Conventions and Business Operations Chris Brown. “We’re honored to welcome him to this year’s NAB Show New York as he shares his insight and distinguished experience with attendees.”

De Niro’s production company, Tribeca Productions has developed projects on which he has served as producer, director and actor and is highly noted for “A Bronx Tale” in 1993 which marked De Niro’s fabulous directorial debut, as well as, “The Good Shepherd” in 2006. The work that De Niro continuous to demonstrate is purely a commitment to excellence.

The Tribeca Film Festival, which he founded with Jane Rosenthal and Craig Hatkoff founded in 2002, has globally enriched our movie industry. In 2009, De Niro received the Kennedy Center Honor for his distinguished acting and the Stanley Kubrick Award from the BAFTA Britannia Awards. De Niro was honored with the Cecil B. DeMille Award at the 2011 Golden Globe Awards. He also has served as the jury president of the 64th Cannes Film Festival.