The Quest to Turn Broward County, Florida into Hollywood South

From a new motion picture incentive program to the construction of a major $164 million film studio complex, Broward County, Florida is on a mission to become a major player in international film and television production.

Sandy Lighterman, a veteran producer for Viacom, began this year helming Broward County’s film recruitment effort as Film Commissioner, based in Fort Lauderdale. Before that, she was Dade County Film Commissioner in Miami for 14 years.

As a former working producer herself, Lighterman speaks the language of producers considering shooting their film or television project in the Fort Lauderdale area.

“My producing experience has made a huge difference,” said Lighterman. “Everybody in the industry has my personal number so I get calls at night and on the weekends. I don’t treat this as a county government job. I treat it like I’m still in the film industry. We know what filmmakers need and offer them concierge-type services.”

To qualify for an economic incentive for shooting a production in Broward County, a project must be worth a minimum of $400,000 and 60 percent must be filmed in the county. Fifty-five percent of the cast and crew must be residents of South Florida. If a company meets these and some other requirements, they qualify for a 15 percent rebate — capped at $175,000.

The incentive fund, said Lighterman, is geared toward films budgeted between $1.5 and $5 million. She said another program is being developed to aid larger budget feature films and major television series production. She would not provide details, but said the new program will be announced soon. 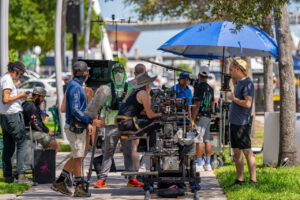 Already, more or less continuous production is going on in Broward for smaller films by companies including Lifetime, Paramount and Hallmark. But the new initiative is designed to create a more welcoming environment for the biggest international productions to shoot in the Broward area.

Going in, Lighterman said, it is already much cheaper to shoot in Broward County than other production locations, including nearby Miami. “It is way less expensive to shoot here and we have a lot of similar and dissimilar locations. We keep a database with photos of all the diverse locations available in the county.”

Many films and television series have been filmed in Broward over the years, but one feature, Cape Fear, was filmed on what was once the Wingate Incinerator site, a long vacant city-owned parcel and former Superfund site with a notorious past.

The soil and water at the site was contaminated with toxic alcohol, though it was cleaned up two decades ago. It’s on a 61-acre plot at 1400 NW 31st Avenue in Ft. Lauderdale.

This past summer, the Fort Lauderdale City Commission approved a plan for the Fort Lauderdale Studio Initiative, a joint venture between Michael Ullian, a developer who specializes in redeveloping once hazardous sites, and Christopher Urisitti, a partner at Los Angeles Center Studios.

The new 350,000 square foot project, whose construction will begin soon, will feature eight sound stages, production offices, indoor and outdoor movie sets, a studio backlot, restaurants and entertainment space. It will operate as a full-service film, television and streaming production studio with an on-site mill where film and production sets can be made. A full-time, accredited film school will also operate on the site.

“This is an exciting opportunity for Fort Lauderdale and the region as a whole,” said Fort Lauderdale Mayor Dean Trantalis. “It’s prime time for the film industry to move here. It’s a neat and exciting industry. It will spawn other businesses in the area. And it might even bring another film studio here.”

Lighterman said the new studio complex is also expected to draw an even larger base of experienced crew personnel to the area since the amount of production work will dramatically expand as the new stages open. 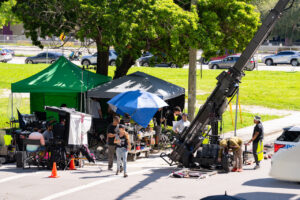 “Broward County is ready to become a major production center,” said Lighterman. “In addition to our incentive program and other programs we are developing now, we are putting all the pieces together to create one of the best shooting locations in the nation.”

The Broward County Film Commission office maintains a production directory of crew members, production facilities, location sites and hotels that welcome film productions. The office is also a one-stop location for permits for all shooting locations in the county.

“We have a deep crew base in South Florida. It might surprise some people but we have enough crew members for at least three large projects at once. Most work on commercials when major projects are not being produced. Many more will move here when the new studio complex is open,” she said.