The Sound of “Uncharted”

Currently screening exclusively in theaters, Columbia Pictures’ Uncharted centers on street-smart Nathan Drake (Tom Holland) who is recruited by seasoned treasure hunter Victor “Sully” Sullivan (Mark Wahlberg) to recover a fortune amassed by Ferdinand Magellan and lost 500 years ago by the House of Moncada. Based on the critically acclaimed and top-selling PlayStation video game series, created by award-winning developer Naughty Dog, and directed by Ruben Fleischer, the film is a classic cinematic adventure with a modern twist, combining thrilling action, humor, mystery and escapism into fun-filled family entertainment. 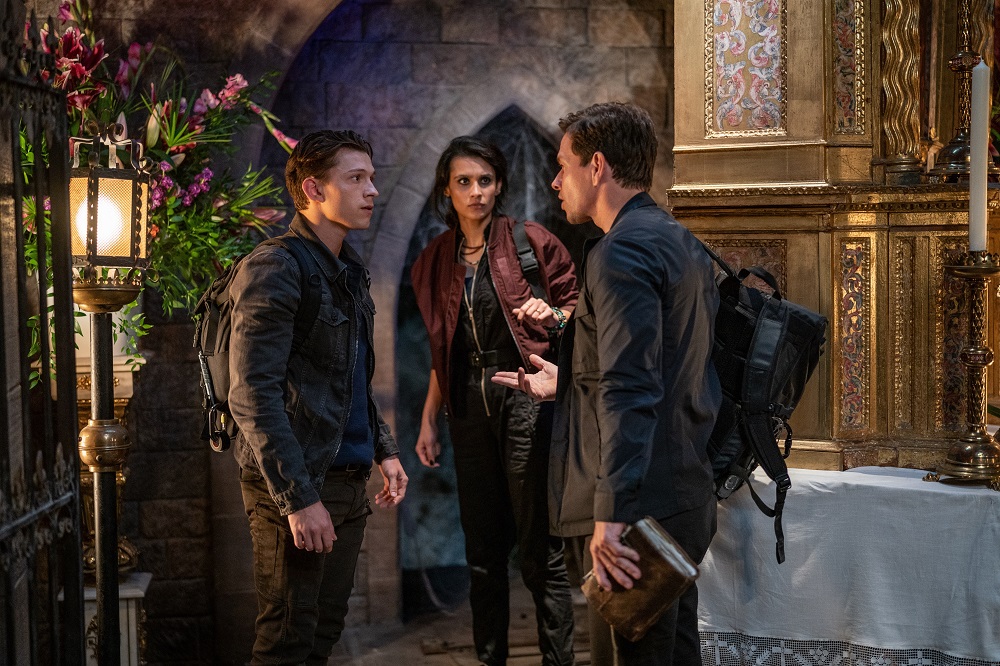 From the film’s jaw-dropping opening scene, in which Drake is caught up in a furious midair fight, through to its thrilling conclusion, Uncharted afforded plenty of opportunities for creativity from its sound team based at Sony Pictures Post Production Services. Supervising Sound Editors Kami Asgar and Erin Oakley led a veteran crew in creating soundscapes to support the discovery of 16th century Spanish carracks in a tropical cave, a harrowing escape below the streets of Barcelona, a brazen heist from a tony auction house and many other memorable scenes.

Asgar and Oakley, whose previous collaborations with Ruben Fleisher include Sony Pictures’ hits Venom and Zombieland, were given wide latitude to use sound to enhance the globetrotting adventure. “Although based on the Uncharted game series, the movie tells a wholly original story,” Asgar notes. “There weren’t many sounds that needed to match the games and that left us a lot of freedom to support the story and build excitement with innovative, memorable sound.”

The film’s opening scene starts the story off with a bang. Drake is hiding in a cargo plane when a gunfight erupts, the plane’s rear door is thrown open and he, along with several bad guys, are swept out, along with a half dozen huge cargo crates. A desperate struggle ensues as Drake clings to the sides of the crates while fending off attackers.

The uncanny realism and adrenalin-soaked intensity of the scene is heightened through the sounds of the plane, wind, the tumbling crates, Drake’s parkour-like acrobatics, gunfire, physical combat—and a sports car that accelerates out of the plane just as Drake is about to make it back inside. Asgar says the scene was among the first his team tackled, and they kept refining the supporting soundscape through the final mix. 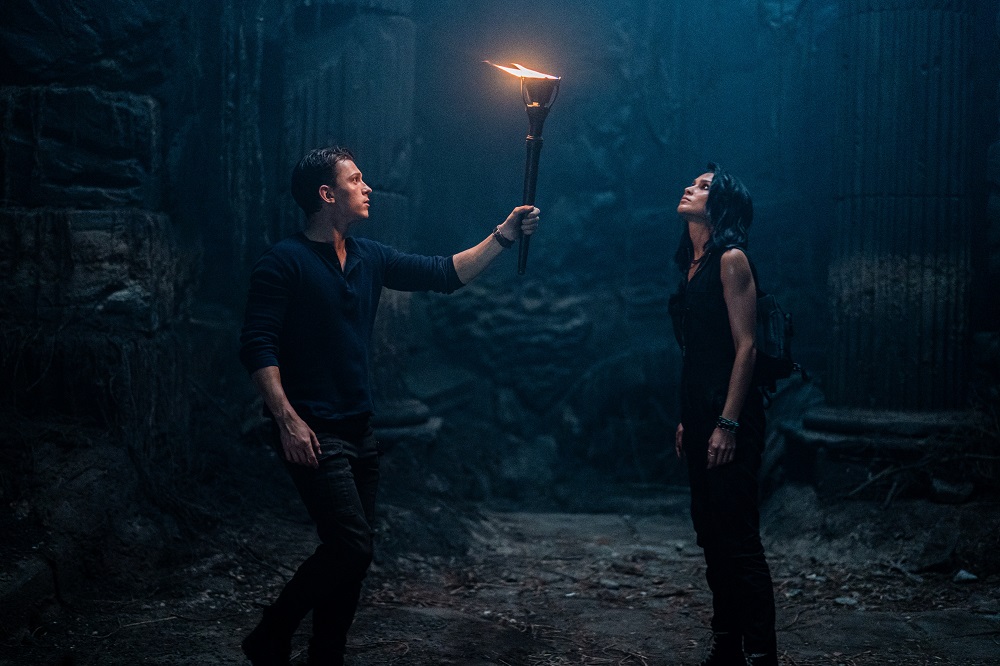 “We started on that scene early and were able to witness some of the visual and special effects magic that went into it,” Asgar recalls. “It was amazing, and it inspired us to do our best work with sound effects that help bring the visuals to life and ground them in reality.”

Dialogue, shouts, cries, exhalations and other vocalizations occur throughout the scene. The post-sound team was provided with production tracks recorded when the live action portions of the sequence were captured. They also hosted ADR sessions to record additional dialogue. Given the complexity of the scene and the frenzied action, building dialogue tracks that meshed organically into the scene was a significant challenge. “The live action was shot on a giant special effects stage with the actors, the crates and other set pieces suspended from robotic arms,” Oakley explains. “The production sound crew were positioned below and captured the actors’ voices with boom mics.”

“’Scream like you’re falling out of a plane,’ is a very challenging thing to ask an actor to do,” Oakley adds. “But Tom Holland and the other cast members are consummate pros and did a fantastic job of creating the moment. They gave us wonderful material to work with.”

Later in the film, Drake and Chloe Frazer (Sophia Ali) are exploring a crypt below the streets of Barcelona when they are discovered by gunmen who pursue them through a series of old, subterranean tunnels. Bursting through a barrier, Drake and Choe unexpectedly find themselves in an underground disco. Continuing to flee, they nearly drown when they become trapped below a city fountain in a passageway that is filling with water. 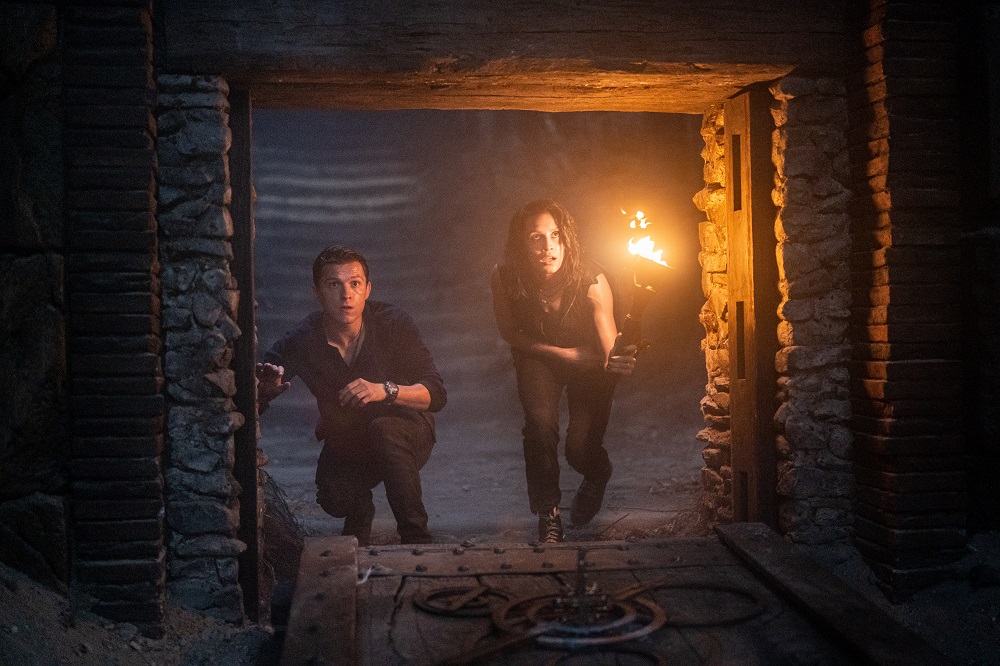 “The underground sequence in Barcelona gave us a chance to create some really cool sounds,” recalls Asgar. “Our job was to make the audience believe that they are travelling through a web of tunnels with unexpected things happening all around them. Stumbling into the nightclub comes as a big surprise both to the characters and the audience—and the sound heightens the shock by abruptly shifting to electronic music and people dancing. It was a great fun for us!”

Foley sound effects played a big role in making other scenes spring to life. Oakley points to a sequence where Drake and Sully discover Magellan’s ships anchored in a watery cave. “Getting the ships to sound real was very important to Ruben,” she recalls. “What does it sound like to walk across the deck of a ship that has been resting in a cave for five centuries? Foley Artist Gary Hecker and his crew did an outstanding job in creating the creaks and groans of ancient timbers and ropes that sound uncannily real.”

Asgar notes that Foley also played a crucial role in a scene involving a heist in an auction house where Drake is bantering with security guards while dangling from a large lighting fixture 20 feet above the auction house floor. “The light is made up of long, glass tubes that are swinging wildly and banging into each other,” he explains. “Gary did a fantastic job in providing us with sound elements that helped us sell that scene. It was very challenging because we also needed to hear voices from the auction below and radio exchanges between the two bad guys who are trying to capture Drake.” 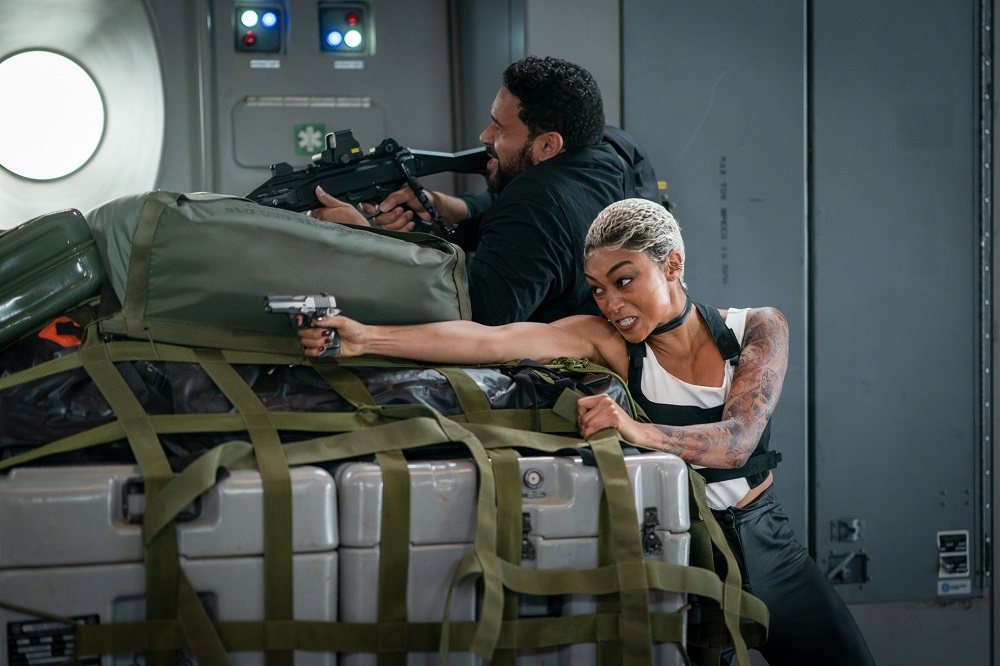 Oakley notes that Ruben Fleischer was unable to attend some mix sessions in person but monitored the work closely via Sony’s 360 VME technology. The software was used to simulate the precise physical dimensions and speaker locations of the Grant Theater so that Fleischer, listening in on 360 VME headphones from his home on the East Coast, heard the same spatial sound. “Ruben was impressed with how well the technology worked,” Oakley says. “It can reproduce the effect of sounds originating from 30 or 40 feet away. If you close your eyes, you’d swear you were sitting in the Cary Grant Theater.”

Uncharted is a movie calculated to keep audiences glued to the edges of their seats and constantly guessing what comes next. Sound plays a big part in maintaining its relentless energy and atmosphere of escapist fun. “We’re very proud of this movie,” Asgar says. “It’s a great adventure story, full of excitement, action, mystery and memorable characters. It has the best of everything, including dynamic sound that helps make it a rich, involving and thoroughly entertaining experience for moviegoers.”