For cinematographer Ed Wu, the choice to use Cooke Optics Anamorphic/i S35 prime lenses for the Netflix original film End of the Road was easy. The harder choice was whether to go with Special Flair (SF) or not. So, he made the most logical decision, go with both.

“I’ve used Cooke lenses a lot,” said Wu. “The S4s, S5s, S7s, pretty much all the sphericals and the anamorphics, so I didn’t need to do tests to figure out what lens I wanted. With Cooke anamorphics I knew what I was going to get, plus I have a good encyclopedic knowledge of anamorphics in my head. For End of the Road, the Cooke anamorphic S35s completely met Millicent’s [director Millicent Shelton] shooting style, which called various focal lengths, and the S35s have every prime lens we would need…no compromises.” 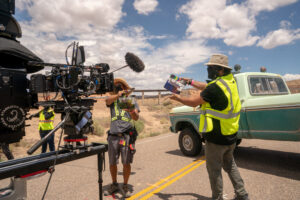 When it came to whether to use the Cooke Special Flair version of the Anamorphic/i S35 prime lenses, that is where the testing came in.

“First, let me say that if this was a single camera shoot, the special flairs would have been 95% of the film,” said Wu. But even as a multicam and split unit film, they’re still on screen 70-75% of the time. My A cam was always special flair, whether it was close, medium, or wide.”

Wu had heard about Cooke’s Special Flair lenses and how they significantly enhance flares, and had always wanted to try them. “For End of the Road, we tested and compared the special flair to no special flair, doing the exact same comparisons with the majority of wide lenses up to the 75mm. I would flair with a separate off-cam and on-cam flair created with a tungsten hard fresnel, an on-cam unfrosted bare bulb, and an on-cam flare from a flashlight that would move around the barrel. After seeing the tests and how the horizontal flair looked on the flashlight, plus the special flair’s nice milkiness, you could just feel the excitement from the image. With lots of practical lights in frame, highly saturated color, car headlights and a more subtle flare from cell phones and more pinpoint sources, I knew that special flair was the way to go.”

“Mil and I talked, and she especially wanted to lean in towards the flair. Just because a flair doesn’t happen naturally, doesn’t mean it won’t lean towards naturalism and stylism to create emotion in the viewer. Plus, we had non-special flair lenses to fall back on if the flair was too much.”

Wu used the 65mm MACRO as a straight 65mm…mostly. “I used macro for a few shots, to get close and then get a wider shot. That wideness, it’s like a 35mm spherical. With most lenses, you’re so limited to how close you can get. I always want to go wider and closer. I was always limited by how much I can get in, and with a diopter I couldn’t get all the way back for a wider shot, so these 65 macros are just perfect.”

“Mil has a TV background and likes multicam a lot,” continued Wu. “She likes shooting two and three cameras at a time. What I love is two or three widest, which you can’t really do that on a single camera job. I love the 32 and 25 for my wides. I’m astounded by the lack of radial distortion and how clean the edges look. It’s just so clean…it’s amazing. For the characters, I used the 50 and 75 for mediums and the 75 and 100 for close-ups, with an honorable mention to the 40. But we threw on every lens for the shoot. It’s pretty impressive the number of anamorphic lenses from Cooke that you get in the range. You get that wide focal length you expect, but other lens companies end at 100, Cooke going up to 300 is pretty amazing!”

End of the Road is a high-octane action thriller where a cross-country road trip becomes a highway to hell for Brenda (Queen Latifah) and her family. Alone in the New Mexico desert, they must fight for their lives when they become the targets of a mysterious killer. Shot outside of Albuquerque, New Mexico between June and August of 2021, the conditions Wu and Shelton wanted in the film were exactly what they got in real life.

“When it came to exterior daytime shots, we lit with the sun,” explained Wu. “We would plan within the schedule for the best times to shoot with back or side light, always trying to avoid flat sunlight. I also used a fly swatter to avoid the direct noon sun on top of our actors’ faces. We did have to shut down a few times to avoid heat stroke, but it was a tough shoot that pays off on camera.”

It was important to Wu and Shelton that their visual theme of the location was not the typical desert that’s a dry desaturated world lacking color. “We would push a vibrancy that we haven’t seen in a desert landscape and small town,” said Wu. “Mil let me push those limits on the camera and the lighting side.”

In addition to being an action/crime drama, End of the Road is also a drama of a family recovering from a loss, explained Wu. “I wanted to push the idea of the heat of the sun and summer in the desert. We see that playing into the language of the characters…sweating more, with me opening up exposure, exposing hotter on the tone curve and riding the edge of blowing out on the high end. And for night, I wanted them to stay in that heat, so I used a purple moonlight – cyan or blue is typical – but purple is a warmer hue, continuing the idea of the heat within the story.”

“We also wanted to show beautiful vistas, but how desperate you can be in this isolated world,” continued Wu. “You’re nobody compared to the elements, climate, and geography. Anamorphic helped to isolate the characters. There’s nowhere that they can go except forward. So, there’s lots of negative space being on the wider end of the lenses.”

Shooting as wide open as he was, Wu used 1/8 black pro mist throughout the entire shoot, given the more extreme blooming that the soft frost adds.

One of the surprising aspects of shooting in New Mexico in the summer was the weather. Not the sunny and hot weather you would expect, but the rain.

“The weather conditions were crazy,” explained Wu. “It turns out that New Mexico has a monsoon season, and none of us knew that. Basically, 3-5 days of the week a thunderstorm would roll in out of nowhere and pour rain for 1-2 hours. That meant shutting down 3-5 days of the week when lightning got to within six miles of our locations.”

While the weather meant losing 3-5 production hours a week and having to push the contrast to match the shots in grading, it did deliver an unexpected benefit, according to Wu. “We caught a lightning strike behind one of the villains. It was a stroke of luck and it’s still in the film.”

Alastor Arnold, senior colorist at FotoKem, was brought in very early by Wu. “I always like to bring the colorist in early to develop the LUTs,” said Wu. “We do a bunch of tests, get him the lookbook and some footage of the production design elements, what the cars will be as this is a road trip movie, and some choices for the colors. There’s a lot of very vibrant colors, like a burgundy red Crown Vic and a baby blue SUV for the family. The idea was to push the saturation and vibrancy, but not have it feel overly saturated. It still needs to feel like reality.”

“When Alastor and I are finally in post, Mil comes in and wants to push the saturation even further,” said Wu. “Shooting in HDR gave us much more colour and tonal space to work with. We were definitely pushing the edges of the colour science.” 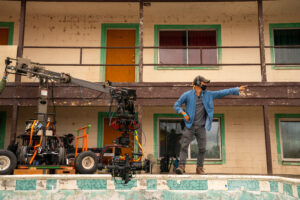 “To me, aesthetically, I don’t like the very crisp images you get with digital and other lenses. I like the softer look characteristics of Cooke lenses, the falloff you get with how the optics work. It’s just more immersive to the story telling and Cooke has that really nice balance, where I see the sweet spot between the background falloff to create the soft look, but a sharper foreground so that faces and emotion come out extraordinarily clean.”

“With Cooke Anamorphics, they’re not gunky nor do they deteriorate like a lot of other anamorphics fighting a wide-open stop for clarity. Cooke, wide open, the center always stays sharp and just the edges fall off. If I go wide open, they retain that sharpness in the center of the image. Even on set with a 25-inch monitor, you can only get so close to the monitors to see the fine resolution. But I have confidence in Cooke anamorphics and I know that I will have that center sharpness with the falloff that I really like.”

End of the Road premiered on Netflix in the US on September 9, 2022