MTSU has a master and redundant backup PlayBox Neo system. Tennessee-based Bridge Digital provided systems integration and consulting services to MTSU, with Bridge Digital Sales Engineer Glenn Wright serving as the main contact on the project. Bridge Digital installed its first PlayBox Neo system at MTSU in March 2022. According to Tye Whitaker, Senior Manager of True Blue TV, “We present a diverse blend of programming, including campus lectures and academic activities; live and encore broadcasts of university events and ceremonies; features on our undergraduate and graduate majors; and classroom and professional resources for K-12 schools and educators. We also share public, educational, and governmental programming from our state and national broadcasting partners.” 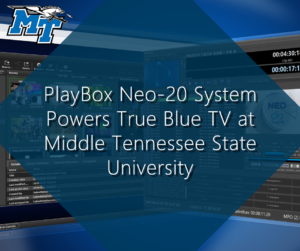 The daily schedule of live and pre-recorded programming typically starts at 6am and ends at midnight. The PlayBox Neo system is in keeping with the school’s commitment to maintaining top-of-the-line facilities. The Media Arts department is equipped with a 40-foot mobile production unit, five studios, and a well-stocked assortment of field equipment.

“We buy the best technology we possibly can,” said David Foster, Executive Director of True Blue TV. “We want our programming to be indistinguishable from what viewers would see on any other channel. The PlayBox Neo system is an easy to use and operate and gives us a superb output. We’re in it constantly, and it just performs flawlessly.”

PlayBox Neo solutions provide a seamless workflow to keep channels on-air by combining scheduling, ingest, playout, CG and interactive graphics within one box and remote tools to enhance QC checks, preparation and monitoring. The output can be SDI and/or IP streaming and is suitable for a variety of applications including traditional broadcast TV, pay-TV, playout centers, satellite operators, etc.

“The Marketing and Communications department at MTSU does some incredible work,” said Van Duke, Director of U.S. Operations, PlayBox Neo. “We’re proud that our technology plays a part in bringing their content to the public. And we’re happy the students have found the system so easy to use.”

TitleBox Neo-20 allows infinite layers of high-quality graphic overlay to be created and manipulated during on-air. Its capabilities include text selection with transitions, the creation of horizontal crawling text, vertically rolling credits and messages, still and animated logo graphics, clocks and countdowns, coming-up-next banners, and the display of data coming in real time from sources such as live RSS feeds and social media.

About the MTSU True Blue TV

True Blue TV, launched in 1999 as an educational resource channel, is the now the premier hub for video content and live event programming from Middle Tennessee State University. Our channel appears on cable systems and streaming services serving the Middle Tennessee area and select programs are featured on MTSU’s main social media and digital platforms. For more information, please go to www.mtsu.edu/truebluetv. Here you will find current information about programs and program schedules to help you get the most out of Rutherford County’s cable channel dedicated to learning.