Fremont, CA – April 25, 2019 – Blackmagic Design has today announced that DaVinci Resolve Studio was used throughout the full color pipeline on Disney’s live action remake of Dumbo. Directed by Tim Burton with a screenplay by Ehren Kruger, the DI was delivered by Goldcrest Post’s Adam Glasman, who collaborated with Director of Photography Ben Davis, BSC. 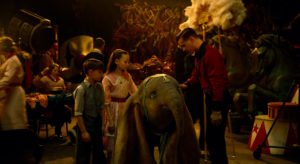 Using an ACES workflow in DaVinci Resolve, Adam and Ben began preproduction by defining a warm, golden-hour period look inspired by the layered colors of the original cell animation’s minimalist production design. Finished in 2K to enhance the soft, filmic quality of the rushes, the team had to cater to a variety of different deliveries, including Dolby Vision 2D/3D, SDR 2D/3D, and both HDR and SDR Rec 709.

“While a lot of Dumbo was built and shot in-camera with amazing sets and many extras, a decision was made early on that the animals and all the skies would be CG,” says Adam, explaining that purpose built sets constructed against blue screen backgrounds would be used to film Dumbo. The integration of fully CG skies was crucial to reflect the expressionist, dramatic painted backdrops of the original animation.

Using an ATEM Television Studio HD switcher as part of the DIT workflow, the team was able to key in several different dramatic sky reference images shot by Ben during preproduction together with a live feed from the camera. With feedback from Tim, these were then used to inform the lighting and mood of the entire set.

“Tim was keen on keeping a good level of contrast in everything to help integrate the computer generated assets with the background,” Adam continues. “The VFX vendors (MPC) were given references for how a scene would probably look and lit their CG accordingly, so I had to be very careful not to spoil that.”

This was especially important for the Dolby Vision deliveries reveals Adam. “The CG skies, for instance, look amazing. If you compare a traditional DLP projection at 48 NITs to the Dolby Vision version at 1000 NITs, you instantly notice that you get a far wider color gamut with more added dimension with Dolby Vision. The sky is just as bright as it would be in the real world, so you have to treat it very sensitively.”

The DI wasn’t just about maintaining the integrity of the picture, however. Working with Tim Burton also meant there were plenty of opportunities to experiment with color too.

“Tim’s genius came to light in a scene with Dumbo’s mother in a cage, with a strong red light on her,” Adam concludes. “There are all these animals dressed up as monsters in the cages surrounding Dumbo’s mother, and Tim just decided we should give those other cages strong colors too. I had a lot of fun making each monster a different hue, from bright green to ultraviolet. It adds to the scene. Between the production design, cinematography, and Tim’s vision, the whole film is visually stunning.”

Product photos of DaVinci Resolve Studio and all other Blackmagic Design products are available at www.blackmagicdesign.com/media/images.