NASHVILLE, August 14, 2014 — Mobile production specialist TNDV has five trucks and six fly packs crossing the country on any given week, but for one week in June most of the fleet and crew remained in Nashville for the CMA Music Festival, accommodating a live broadcast TV shoot plus video and audio production across multiple downtown stages. 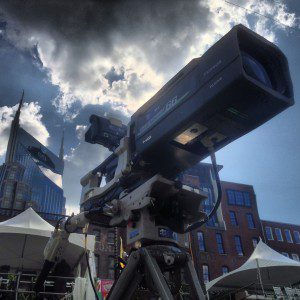 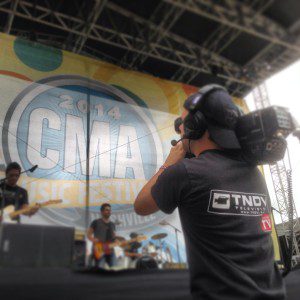 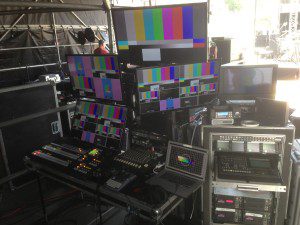 TNDV’s relationship with the Country Music Association is enduring, delivering full-service mobile production for several annual events including pre-show festivities for the CMA Awards each November. The CMA Music Festival is the most immense, encompassing many outdoor stages with live performances from well-known and emerging national and local musical acts. TNDV also provided onsite shooting, graphics and editing services across most stages, producing 30 original packages used in conjunction with an ABC TV special that aired on August 5.

In addition to the musical performances, TNDV’s Aspiration truck was reserved for a 10-camera live TV shoot, capturing performers and personalities for the CMT Music Awards Red Carpet Special. The mobile production infrastructure required 96 channels of professional audio and a massive RTS intercom matrix to ensure smooth communication across the large production crew.

“Our relationship with the CMA is based on production flexibility, requiring an innate ability to adjust on short notice while keeping pace with their year-on-year growth,” said Nic Dugger, owner and president, TNDV. “The relationship has evolved over a six-year period, when we were first approached for a simple rental that we quickly converted into a custom flypack. This year, it meant providing a diverse array of scaled mobile production solutions, including trucks and flypacks, to shoot, mix, edit and stream performances throughout the week. That made for a number of unique and interesting situations that allowed us to engineer custom workflows to accommodate production needs based on event scale and venue size.”

Some of the more unique events included the CMA Close Up stage, featuring private performances and interviews from Lady Antebellum, Leann Rimes and other well-known artists. TNDV set up a streaming server to capture the main events, engineering a live, automated switching architecture with three HD robotic cameras and integrated encoding technologies from BlackMagic Design to seamlessly hand off the live streams.

Additionally, TNDV converted a downtown honkytonk club into a performance venue that also served as a shoot for the premiere episode of Big Smo, a new A&E network reality TV show that follows the life of a Tennessee rap artist. The end-to-end solution includes several large HD display screens for live image magnification of the performances.

On a grander scale, TNDV supplied a five-camera HD flypack for the CMA Chevy Riverfront Stage, with massive LED video boards and a full online HD edit suite. Performances from this stage, which included Billy Ray Cyrus, Kellie Pickler and Colt Ford, were also played back across other venues throughout the week using Aja KiPro servers.

Custom mobile production solutions were also developed across additional venues, including the Bud Light Stage and Samsung Galaxy Stage among other locations.

Formed in 2004, TNDV: Television represents the culmination of over 22 years of broadcast and live production for Nic Dugger, owner and president; and his staff of full time engineers. TNDV produces events from small single-camera productions all the way up to multi-million dollar international TV events, and takes pride in building custom solutions for challenging productions of any size, in any situation. Recent projects include the live concert productions at the NCAA Final Four, the 2013 Re/Max Long Drive Challenge on ESPN, and for the first time in broadcasting history TNDV produced the 2014 Hat Trick of Country Music Award show red carpet specials, including the CMA Awards, the CMT Awards, and the ACM Awards. Please call 615-585-6528 or visit www.tndv.com for more information.