Trilogy, a leading supplier of intercom solutions and master reference generators for the broadcast industry, has announced its role as one of a group of industry partners who supported the European Broadcast Union (EBU) and Belgian public broadcaster VRT’s successful remote production of a live music concert on 15 January using IP across the entire production chain, thereby demonstrating the capabilities and the benefits of IP in live broadcast production. 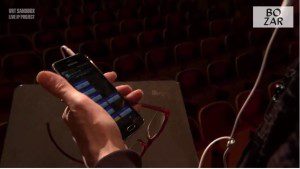 The remote production set-up was an extension of a full IP local studio set-up and previously demonstrated by the project group in August 2015. The concert venue, Bozar, in central Brussels, was connected to the Live IP control room at VRT Brussels by a single 10km long optical fibre cable, carrying an IP network.

The Gemini system is based on a distributed matrix IP-based architecture, which removes the risks associated with a single point of failure. With further centralised control capabilities via Ember+, Gemini ensures tighter overall control intercom systems as a consolidated part of the entire broadcast infrastructure.

The IP data transported in each direction via optical cable was enough to connect four IP cameras, 10 microphones, Gemini intercom, control signals, camera return signals, and a virtual intercom system via Trilogy’s Virtual Panel application. Importantly, the latency of Trilogy’s VoIP intercom system was so low that it was unnoticeable to the production team.

Trilogy Product Specialist John Sparrow said, “Trilogy pioneered IP-based intercoms and as a company has been working in that environment for more than 15 years. Gemini has had integrated IP capability from the start and has proven to be extremely popular with users worldwide. We’re proud to support the Live IP project and its partners as further acknowledgement of just what can be achieved in a total IP production chain.”

The Live IP Project, part of the VRT Sandbox technology accelerator programme, is the world’s first proof of concept of a complete multivendor live production chain that relies exclusively on IP. Driven by the VRT and the EBU, and powered by a long list of partners including Axon, Dwesam, D&MS, EVS, Genelec, Grass Valley, Lawo, LSB, Nevion, Tektronix and Trilogy, this venture has developed a fully functional IP production studio. The Project also uses existing open standards, including SMPTE 2022-6, AES67 and PTP. As a result, it demonstrates a high level of interoperability.