Still, tripods and fluid heads are the mainstay of most video productions, but a new generation of smaller and lighter gear better suits the more compact cameras we use today. The problem is there are so many choices of camera support systems at all price points. How does one choose? Why are some models so expensive, while others that appear to look the same cost so little?

Tripods are designed for video or still photography, while some claim to be usable for both. Distinctions blur in this era of hybrid cameras used for both formats. This can make the choice of a tripod and head tricky.

Let’s start with the basics. The main function of all tripods is to hold a camera steady with no movement or vibration. No matter the cost, materials, design or size, stability is the key purpose of using a tripod. 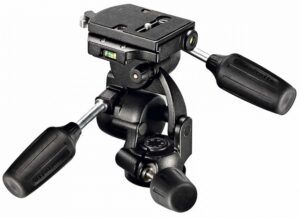 With every tripod, the head is the most important component. Heads have different capabilities and are the biggest difference in how a tripod is used.

Pan-and-tilt heads, used for both still photography and video, are designed to position the camera in a single axis at a time. This may be vertical, horizontal or pan. Moving the head through one of the axes is achieved by loosening an arm with a twist, repositioning the head and then re-tightening the arm. The main negative of this type of head is size, which can be quite bulky.

Most videographers prefer fluid heads. These are a type of pan-and-tilt head that uses a sealed liquid to create a hydraulic damping system. This fluid technology enables smooth, steady motion.

All fluid heads are not the same. True fluid heads are more complex and require more precision to manufacture. They cost more, but feature a greater range of damping and resistance adjustments and offer predictable and controllable panning and tilting. 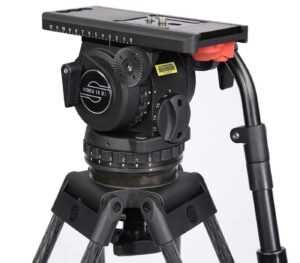 Some videographers prefer ball heads. Designed for still photography, this head type has a ball enclosed in a housing with a tightening knob. When the knob is loosened, the ball can move around.

Ball heads, like others, differ. Some have secondary and tertiary controls, while others have panning bases with a separate knob to lock the head in the axis. Still others have adjustable friction knobs and controls that allow more precise control. 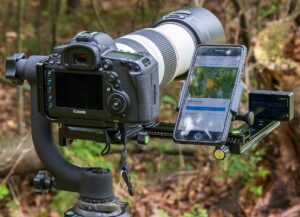 Gimbal heads are designed for use with large, heavy telephoto lenses. The head is mounted on the lens’s tripod attachment point — not to the camera itself. This type of head is designed to track fast-moving subjects. Gimbal heads are chiefly used in wildlife and sports production.

The chassis of the tripod is where the legs connect. It forms a platform for mounting the head. Some allow direct mounting of the tripod head while others feature mounting plates. Usually made from a metal alloy, the chassis provides maximum stability with tripods that don’t have a telescoping center column.

Leg locks hold the tripod’s legs at a prescribed angle and come in designs of all types. Some use friction knobs, pull-out tabs, sliders or spring-loaded mechanisms.

All tripods have three legs (thus the name). There are, however, variations in how those legs are constructed and work. Most tripod legs telescope and collapse for moving around. There are three basic materials used for modern tripod legs — aluminum, carbon fiber and wood. Each has inherent advantages and disadvantages. Materials range from common ABS plastic to steel to exotic basalt lava. 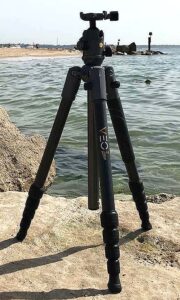 At the end of each leg there is a tripod foot. This foot might be as simple as a rubber bumper or it can have a retractable spike beneath a rubber pad. Options include spikes, clawed feet and various rubber bumpers, all designed for better stability.

A rule of thumb is to use a tripod and head combo that has at least two to three times the load capacity of the heaviest camera/lens combination used on it. Don’t forget to add accessories such as batteries, lighting or microphones in this estimate. Tripods come in different heights. Adjust the tripod’s height to your own so you are not bending over to see the viewfinder.

Vibration can be a factor in tripod use. Blowing wind outdoors can affect stability. Larger tripods offer more stability than smaller ones. But the tradeoff is they are much heavier. You’ll be forced to compromise on size and weight once you start carrying a tripod around on productions.

Last, cost is always a factor. Most beginning crews try to save money on a tripod and head. But they soon invest in better grade gear. Trust me, it is very frustrating working with a poor-quality tripod and not getting the needed stability.

Tripods and heads are a long-term investment for all professional videographers and there are no shortcuts on quality. The best tip is to determine what type of support equipment you need and purchase the best quality you can afford.