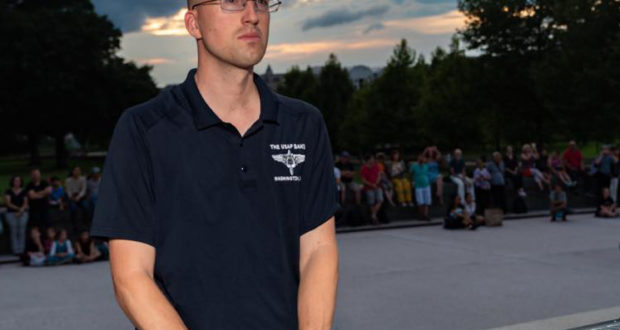 Josh Voyles, a 2005 CRAS graduate (VA) and currently live sound engineer for the United States Air Force Band, assigned to the Airmen of Note as A1 (FOH engineer). Voyles will be present at the July 13 CRAS Open House in Gilbert, Ariz.

Gilbert, Ariz., June 27, 2019 – The Conservatory of Recording Arts & Sciences (CRAS; www.cras.edu), a leading institution for audio engineering education, will be opening the doors to its Gilbert, Ariz. campus (1205 N. Fiesta Blvd.) to prospective students, parents, and the media on Saturday, July 13 from 10am – 4pm.

CRAS graduates, including 2005 grad Josh Voyles who is a live sound engineer for the United States Air Force Band, will be on hand for the Open House, and will also be part of an Open Panel Forum held for current CRAS students the evening of July 11. 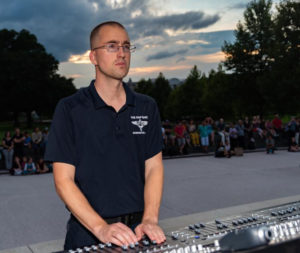 Josh Voyles, a 2005 CRAS graduate (VA) and currently live sound engineer for the United States Air Force Band, assigned to the Airmen of Note as A1 (FOH engineer). Voyles will be present at the July 13 CRAS Open House in Gilbert, Ariz.

“In our ongoing quest to showcase many of the opportunities for our students once they graduate, we are able to give them an idea of what’s out there for them first hand once they enter the open market by connecting them with our graduates,” said Kirt Hamm, CRAS administrator. “Besides our mandatory internship program, getting our students in touch with our grads who either are working for others, or who have made the leap into self employment, is huge. That’s what this grad panel is about in our upcoming Open House. Continued education, networking, and learning what it takes for going out on one’s own by those who have done it already is of enormous value for any student.”

Hamm continued, “We also want prospective students and their parents to discover everything there is to know about a CRAS education, and with hard work and dedication just how successful they can be. For instance, every year, CRAS graduates populate, in great numbers, Grammy nominations for the year. At this year’s Grammy Awards, 14 of our graduates worked on 15 2019 GRAMMY Award-winning nominations by numerous artists. In total, 34 CRAS graduates worked on 36 GRAMMY-nominated albums and songs across 33 categories.”

Members of the July Open House Grad Panel include:

At the July Open House, guests will be able to interact with CRAS faculty and get a taste of the curriculum and the state-or-the-art audio gear spread throughout its numerous classrooms as well as its 42-foot Mobile Broadcast Unit. They will also be able to participate in live demonstrations in many of these real world audio recording studios, live sound venue, and labs.

The Conservatory of Recording Arts & Sciences is composed of two nearby campuses in Gilbert and Tempe, Ariz. A CRAS education includes Broadcast Audio, Live Sound, Audio Post for Film and TV, Music Production, Commercial Production and Video Game Audio, all taught by award-winning instructors who have excelled in their individual fields. CRAS’ structured programs, and highly qualified teaching staff, provide a professional and supportive atmosphere, which is complemented by its small class sizes allowing for individual instruction and assistance for students in engineering audio recordings. CRAS has been providing quality vocational training in Audio Recording for more than three decades. The curriculum and equipment are constantly being updated to keep pace with the rapid advancements in the music and sound recording industries. CRAS’ course offerings and subject matter have always centered around the skills and knowledge necessary for students’ success in the Audio Recording industries.

The 11-month program is designed to allow every student access to learn and train in all of the Conservatory’s studios which are comprised with state-of-the-art audio recording and mixing gear, the same equipment used in today’s finest studios and remote broadcast facilities, including Pro Tools 12, API Legacy consoles, SSL G+ and AWS consoles, Studer Vista consoles, and much more. All students must complete a 280-hour industry internship to graduate from the Master Recording Program II that may ultimately lead to industry employment.

“We want everyone to see, hear, and feel how our 11-month program focuses exclusively on what a student needs to know to begin living their passion in any one of the many facets of the Recording Arts,” Hamm concluded.