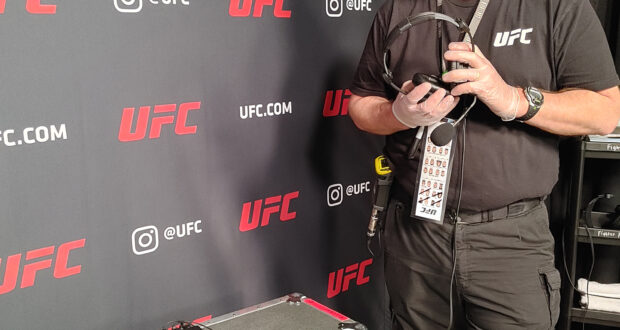 LAS VEGAS, JUNE 23, 2021 — Seth Mitchell has worked on many high-profile events as a freelance audio engineer, including Utah Jazz games, the NBA Finals, the Olympics, and scores of Ultimate Fighting Championship (UFC) fights. As events adapted to COVID-19 protocols for their productions, Mitchell also had to adjust his workflow accordingly. He turned to several products from Studio Technologies, including its Model 214 Announcer’s Console, Model 370 and Model 374 Intercom Beltpacks, as well as its Model 381 On-Air beltpack.

Mitchell has primarily used Studio Technologies products in his role as audio guarantee for UFC productions. Due to COVID, many fights were broadcast out of Las Vegas with limited ringside personnel. After each fight, the announcer would normally enter the ring and interview the winning fighter. However, with the revised protocols, fighters were interviewed from a separate room, requiring reliable audio equipment that seamlessly fit into the production’s signal chain.

On fight night, Mitchell used eight Model 214 Announcer’s Consoles at his studio desk to run Dante® audio to and from his announcer locations. The Model 214 integrated all on-air, talkback, and talent cue audio signals in one compact system. On the event floor, various staff and crew used the Model 370 and Model 374 Intercom Beltpacks for party-line communications. These Dante-enabled beltpacks supported audio, lighting, and jib personnel using standard audio-over-Ethernet connections.

To provide IFB (talent cueing), Mitchell used a range of gear, including four Model 381 On-Air Beltpacks, which were attached to the underside of the announcer’s desks and served in a backup role. The Model 381 provided main and talkback output channels, and IFB (talent cue) listen resources, including sidetone capabilities, as well as essential user controls in its compact package.

“We can switch from wireless to hardwired in less than 30 seconds if there’s an issue with wireless,” said Mitchell. “The Model 381 is the perfect size, has the perfect functionality, and is extremely reliable. It’s not attached to backup; it IS the backup.”

As events are returning to stadiums, Mitchell has altered his workflow once again. In Phoenix, the team recently moved away from having 2-wire at the booth and have added Studio Technologies products for all its wired IFB and comms’ needs. According to Mitchell, “We use five Model 362 IFB boxes, six Model 370A for comms and two Model 374’s. Two of the Model 362’s and two of the Model 370’s connected back to our facility in Las Vegas via Unity Connect. This was so our Spanish control room in Las Vegas could talk to their camera operator and audio tech as well as both talent who were on site. The rest were connected locally to our production truck.”

An example of this was supporting the needs of the “jibs” who usually had their hands full during fights. Studio Technologies was able to provide updated software for Mitchell’s beltpacks, making them compatible with footswitch operation. Studio Technologies was also able to assist with concerns regarding the Model 381 On-Air Beltpack. Mitchell was worried that a fighter might accidentally press the talkback button during a post-fight interview, especially since they were now in a room physically separate from production personnel. Studio Technologies was able to provide updated software that added a feature to meet the needs of Mitchell’s events.

“We asked Studio Tech for updates, and in no time, they came through with solutions for our specific needs,” said Mitchell. “This level of customer service and responsiveness is unheard of in the industry.”