Most of the time audio phantom power is out of sight and out of mind. If we use a microphone that requires it, the normal procedure is to plug in the mic and then turn on the phantom power button on the mixing console or recorder. Normally it just works, but sometimes there are problems.

Phantom power is a simple concept with a long, complex history. The best practice is to always disable phantom power before plugging in a microphone. Then apply that power only to the microphones that require it. As a sound operator, you are expected to know which microphones require it and which do not.

Also, when turning off phantom power, wait at least one minute before plugging in another microphone. This allows the power to dissipate completely from the mic cable. Following these basic safety tips can prevent most problems.

By definition, phantom power is DC electric current that moves through cables alongside the audio signal to supply microphones with active circuitry. Most often used for powering the transducer elements of condenser microphones, it is also used for mics with active amplification and active direct boxes. Power supplies that provide this current tend to be built into mixing devices, microphone preamps, audio recorders or standalone power supplies.

As for standardization, IEC 61938 specifies modern parameters for microphone phantom power delivery. There are three variants: P12, P24 and P48. Most professional microphones now use the P48 standard with a maximum available power of 240 mW. Though all three standards are currently used, the IEC recommends P24 for new microphones.

Phantom powering consists of a circuit where direct current is applied equally through the two signal lines of a balanced audio connector. In modern equipment, this includes pins two and three of an XLR connector. The supply voltage is referenced to the ground pin of the connector (pin one of an XLR), which normally is connected to the cable shield or a ground wire.

When phantom powering was introduced, an advantage was that it could use standard balanced, shielded microphone cable. This is in contrast to microphones with vacuum tube circuitry, most of which require special, multi-conductor cables

With phantom power, the supply voltage is invisible to balanced microphones that do not need it, which includes most passive dynamic microphones.

The IEC 61938 standard specifies that the signal conductors are positive, both fed through resistors of equal value (6.81 kΩ for 48V, 1.2 kΩ for 24V and 680 Ω for 12V), and the shield is ground. The 6.81 kΩ value is not critical, but the resistors must be matched to within 0.1% or better to maintain common-mode rejection in the circuit.

A problem with phantom powering is its implementation is sometimes incorrect, even in professional-quality preamps, mixers and recorders.

One of the reasons is early phantom microphones — manufactured in the late 1960s through the mid-1970s — had simple circuitry. They typically required less than one mA per microphone. Because of this, the phantom supply circuits typically built into the mixing devices of that era were designed on the assumption that this low current output would be adequate

The original DIN 45596 phantom power specification called for a maximum of two mA. Many 48-volt phantom power supply circuits, especially in low-cost equipment, cannot supply more than one or two mA total without breaking down. 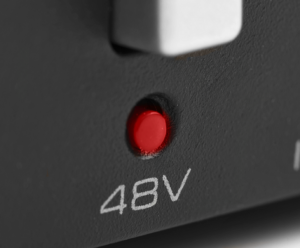 The IEC standard cites 10 mA as the maximum allowed current per microphone. If this required current is not available, the microphone may still put out a signal, but it cannot deliver its intended level of performance.

When this happens, performance can be degraded in different ways. The most common is reduction of the maximum sound-pressure level that the microphone can handle without overload, which results in distortion.

It is widely believed that connecting a dynamic or ribbon microphone to a phantom-powered input will damage it. Unless there is a fault in the mic cable or some glitch in connecting a mic while phantom power in turned on, it is rare that the mic will be damaged. Care is just needed to plug the mic into the cable without phantom power being turned on.

Also note that digital microphones complying with the AES 42 standard may be provided with phantom power at 10 volts on both audio leads and ground. This can provide up to 250 mA to digital microphones. A special digital version of the XLR connector — called the XLD connector — is used to prevent accidental interchange of analog and digital devices.

Using phantom power is fairly easy, if best practices are followed. Like all technical standards, the operator has to pay close attention to details.