In an age where media production is accessible to all creators, more tools and software options are available now than what was dreamed about a decade ago. One of the more versatile pieces of software out there has to be OBS Studio (Open Broadcaster Software). Not only is it free to download and use, but it also has a host of professional features. With a large community of users behind it creating new plugins, its versatility continues to expand.

OBS Studio is a popular choice for online web streaming, connecting to all the major platforms, such as YouTube and Twitch. However, with a creative setup, OBS Studio can also be an extremely economical way to record “live to tape.”

Setting up the Project 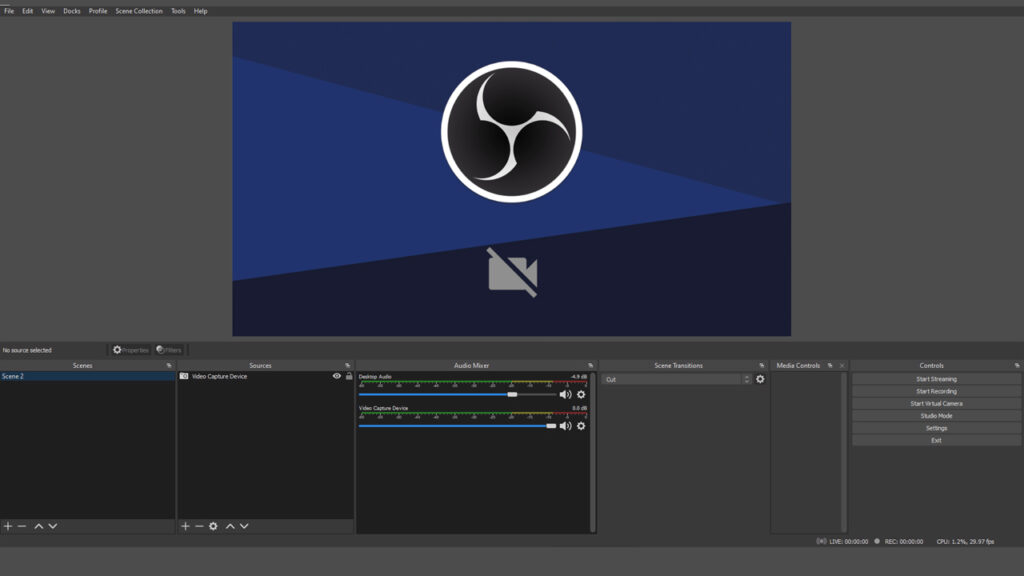 OBS Studio is compatible with Mac and PC, and as long as the machine has moderate specifications, it should handle the recording without issue. If you are acquiring high-resolution or lossless formats, you may need increased specs, but with OBS, you will notice any performance issues immediately.

The video record settings are highly customizable. Choose from several video codec formats, resolutions, and data rates that your project needs. Variable frame rates and constant frame rates are also an option, and OBS lets you customize settings for file recording and web streaming independently of each other.

Connecting a camera is easy. Using an HDMI to USB converter, such as the El Gato, you can connect just about any camera that provides an HDMI signal export. OBS Studio will see this device as a “USB” camera and accept the video feed as a source.

Connecting audio is equally as easy. By selecting “Audio Input” from the sources menu, you can select a microphone that is either attached to the camera or independently to the computer. If the microphone is connected separately from the camera, you may have to adjust the delay to ensure they are in sync during recording. 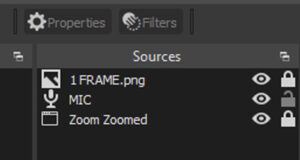 The interface to build your show and organize your assets is simple yet efficient. Your workspaces are separated into two columns; scenes and sources.

Scenes are the “blocks” or “segments” of your show. You build a scene that would contain elements of a thematic section of your video. For example, If you were recording a program with three segments, with a transitional animation in between, you would build a scene for each segment and each graphic sequence. Scenes can be moved up and down the list for easy organization.

Sources are the individual assets you will import into each scene. You can choose from video clips, audio, microphones, cameras, graphics, text, screen capture, program window capture, and more. This gives you access to include a lot of elements in your shows.

OBS Studio operates in a WYSIWYG (What you see is what you get) interface, so you can be confident that how assets appear on the digital canvas is how they will record and playback. 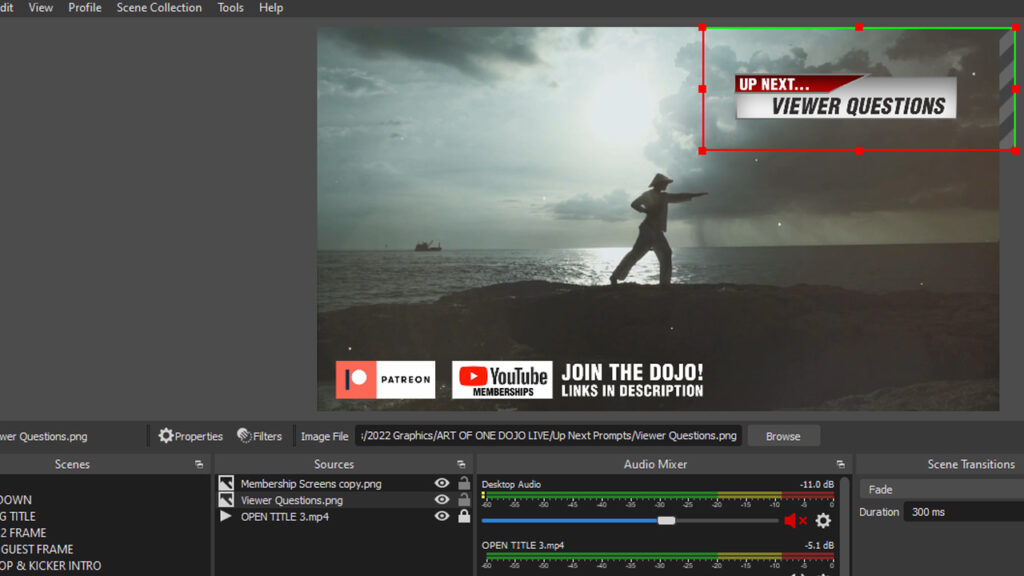 Images, video files, sound effects, and music tracks can be dragged and dropped into the source list. Click and drag to move around, resize visual elements, and lock them in place with the optional locking tool. This lock is handy when multiple graphic layers come into play. OBS Studio supports several different image formats, and files with built-in alpha channel layers–such as PNG–will retain their transparency. This is useful for lower thirds, bugs, or any graphic that relies on an alpha channel.

There are a few caveats to consider when importing video clips for use in B-roll or pre-produced clips. OBS Studio mysteriously does not include any play control panels for video files. When activated, the video will play until it hits the end. There is no rewind, fast forward, scroll bar, or pause/play functionality. Fortunately, several free plugins from the community are free to download and easy to install, providing full playback controls.

When importing video clips, double-click them to open the media properties and select the video attributes. By default, a video that finishes playing will cut to black. Using the video properties dialog box, you can tell a video clip to loop or freeze the frame when it ends.

Each element brought into a scene as a source can be turned on and off by the “eye” icon adjacent to it. You can build a block as one scene for a simple show segment. Each element in the scene can be turned on and off (with optional transitions) for cutaway shots or to activate elements. If you have a music bed in the segment, it will continue playing as long as you stay within this scene. If you switch to another scene, the music will stop, and assets will be reset to elements included in the new scene. There are complicated workarounds, but the most efficient way to approach constructing a show is to build each segment or block as a self-contained scene. 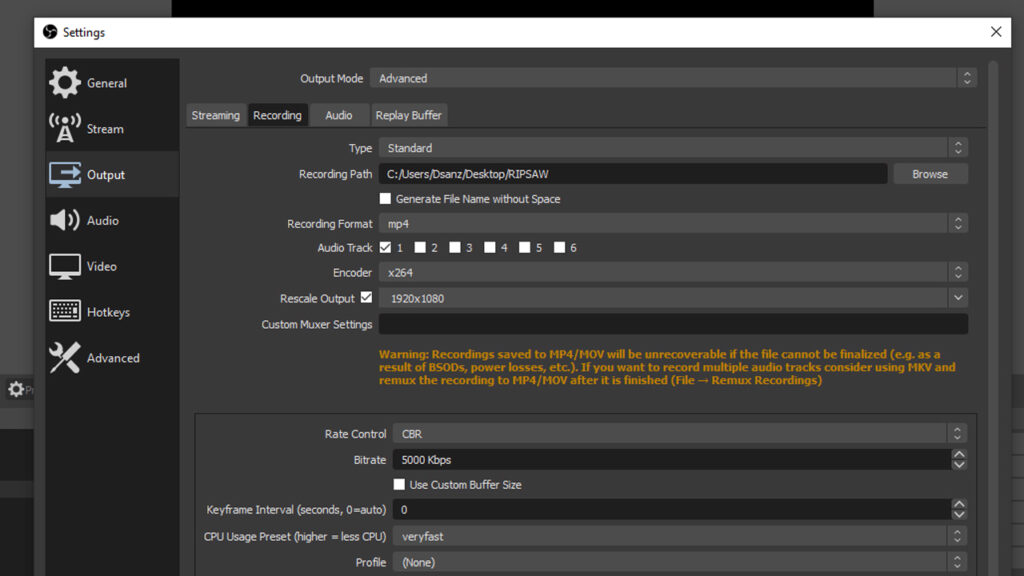 Once you have included your show elements, built your scenes, and set the parameters for all elements, you are ready to record your show “live.”

While a single person can record themselves in a “one-man show,” this process is undoubtedly more manageable with a second person who can switch elements as a technical director during playback.

OBS Studio has two primary interfaces, a “live” activation mode in which each scene will automatically activate when selected or a “studio” mode, which simulates a traditional preview/program interface of a television switcher. In studio mode, when you select a scene, you will see a preview of what is coming up, but it won’t go live until you transition it into the program. This gives you much tighter control over playback. 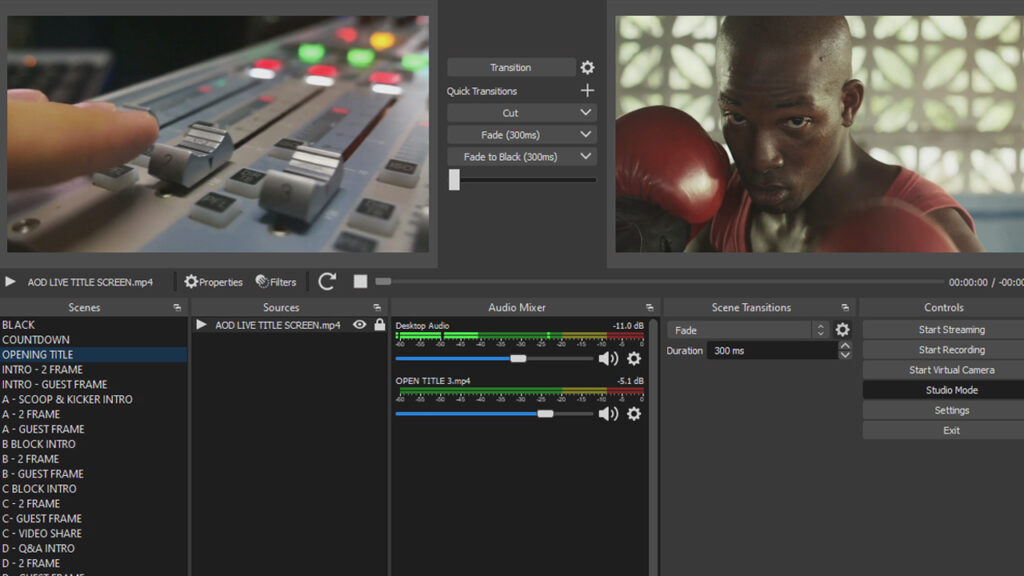 When you’re ready to start, click the “Start Recording” button, and OBS Studio will immediately begin creating a local recorded file to the selected directory. Then you can physically “punch a show live” during recording to simulate a live broadcast. If there is a mistake or mispunch, stop the recording, reset and start again.

There are a variety of ways to run down the show list. You can select and deselect elements and options with the mouse or use OBS Studio’s expansive options for hotkeys to program transitions on a keyboard or remote control.

It is essential to keep an eye on the program screen; what you see is literally what you will get. If you notice a video skips, stutters, or glitches during playback, that is how it will record in the file. These errors are more likely to happen if you push computer specifications to their limits.

There are several benefits to recording “live to tape” for a production. The primary advantage is saving massive time in post-production. With OBS Studio, if you put in the time to build your show efficiently and do a few run-throughs, you may finish your recording session with a perfectly produced clip ready to release.

In other scenarios, it may provide a rough cut of a final show, with only minor nips and tucks required in post-production.

OBS Studio can be a powerful production weapon in a producer’s armory. Free, easy to install, quick to learn, and providing lean performance, it can transform most workstations into efficient and even portable broadcast switchers.