The name sounds more complex than it is, but a cucoloris is a lighting accessory used to cast shadows and silhouettes to project an illuminated pattern on a set.

The cucoloris — often shortened to cookie — essentially breaks up the light from a lighting fixture, giving it a more natural, shadowy appearance in a scene. Cookies can also create the illusion of movement by casting shadows or shining light through a leafy canopy.

The cookie has an interesting history. Cinematographer George J. Folsey, ASC, wanted to separate the skin tones on an actor’s face from the color of his shirt. To accomplish this, he told a grip to hold a stepladder in front of a key light to create a shadow on the shirt. The closer the ladder was held to the light, the softer and less defined the shadow became.

Eventually, the grip tired of holding the ladder. So he cut holes in a sheet of plywood with the same pattern. The idea caught on. One day, Folsey visited fellow cinematographer, Hal Rosson, ASC, who was shooting on another set.

In Rosson’s scene, an actress was lying on a bed wrapped in white sheets. Rosson used Folsey’s wooden grill to create some shadows, which made the scene more dramatic. Later, while shooting a similar situation, Rosson asked Folsey, “Where’s that kookaloris thing?”

The name stuck, though there is disagreement as to its etymology. Some think it’s an eponym of the film director, George Cukor. Others think the term is from the Greek “kukaloris,” or the “breaking of light.” Another possibility is an origin in the German word “Kokolores,” which has different meanings including “nonsense,” “stuff” or “oddments.” Nobody knows for sure.

The cucoloris falls into three categories: Hard, soft and “brancholories.”

A hard cookie is normally made of poster board or thin plywood. The shapes are cut out of this board, allowing it to create the appropriate shadow when held in front of a light.

Soft cookies are created from plastic screens that have been hollowed out to create the necessary shapes. Plastic is more translucent, making the shadows softer and more vaguely shaped.

Brancholorises, or dingles, are not boards, but real items — like tree branches — which give off the effect of tree shadows or blowing leaves in windy weather when moved by an industrial fan. These are often used to create a moving shadow effect.

The cucoloris is a subset of the gobo category. The gobo — a shortened form of go before optics — is a heat-proof stencil that controls the light’s shape. A gobo is placed inside or directly in front of the light source. While the cucoloris is used to shape and direct light, it is located further away from the light source than a typical gobo.

Since gobos are continually near hot light sources, they must be highly resistant to heat (not so much for cooler LED lights). On the other hand, a cucoloris isn’t affected by extreme heat because it is placed further away from the light. 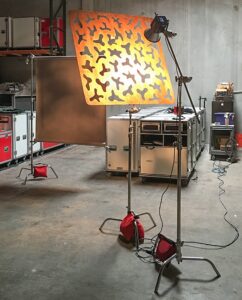 When using a cucoloris instead of a gobo, a much softer edge is obtained. This is because the cucoloris breaks up light in a more natural way and tends to have rounded edges.

Today, cookies can be simulated in 3D computer graphics. An alpha map, or light texture, is used to cast shadows on 3D objects. This virtual cookie happens when light is emitted through the transparent or translucent parts of the alpha texture. Virtual cookies are often used in 3D computer-generations animation and video games.

Cookies are used to indicate the presence of objects like trees or Venetian blinds in film, theatre and still photography. In film noir productions, they can be used to add drama to an otherwise flat lighting setup.

In the film, Casablanca (1942), cookies were used to create the effect of bars on the wall behind the characters — a subtle implication of prison cells. It added an edginess to the war-time story.

With a cookie, any shadow textures can be used to propel the story. If the director or videographer has a specific pattern in mind, cookies can be made to specifications.

Another beauty of cookies is they can be made from metal or wood on the internet, or they can be handmade. Only cardboard, a ruler, a pencil and a sharp cutting blade are required to make a cookie.

First, draw the desired pattern on the cardboard. Then cut out the design. To inspect the pattern, hold it up to a light source and adjust it until it creates the desired look.

Of course, prefabricated cookies can be purchased. There are dozens of shapes and there is no right or wrong kind to buy. Experiment with a few different cucoloris patterns to find the one that works best for your production.

Even with a simple interview against a plain blank wall, a cookie can add depth and flavor to the image. It is an incredibly useful tool for any videographer’s kit.