Anyone experienced in video production is aware of this problem. A subject is on camera — a presenter or perhaps a corporate executive. He or she has only a few lines to say. But, when the camera’s tally light on comes on, the subject freezes up, unable to say a couple of sentences without looking away to a script.

Take-after-take is recorded in an attempt to get it right. The subject just can’t do it. (I’ve even used vodka to calm people down in front of a camera.) Finally, after dozens of takes, something useable is recorded. It is painful to experience.

In the early days of television, on large budget productions, we almost always had a teleprompter on the set. In those days, this required elaborate equipment and an operator that cost hundreds of dollars in daily rental fees. Low budget productions just couldn’t support that high cost.

In the simplest terms, a teleprompter is a device that displays the lines of the speaker’s script. Some prompters are placed below the camera, but the best ones project the script directly in front of the camera lens so the presenter can look directly into the lens. This offers the best eye contact.

Most prompters feature a flat-display screen. This can be a smartphone, tablet computer or LCD display mounted horizontally below the camera. A transparent mirror is then placed at a 40-degree angle to the display so the words are reflected back at the presenter.

Teleprompters were invented in 1950, when the TelePrompTer Corp., made the first model. The company was founded by a group that included Fred Barton, an actor who wanted to assist other performers who had to memorize large blocks of dialogue. Another member of the group, Hubert Schlafly, built the first teleprompter, which was a mechanical device operated by a technician stationed near the camera.

In 1952, President Herbert Hoover used a Schlafly-designed teleprompter to address the 1952 Republican National Convention in Chicago. In 1954, President Dwight Eisenhower was the first President to use a teleprompter for a State of the Union address.

Jess Oppenheimer, who created the I Love Lucy TV series, developed the first through the lens prompter and was awarded a U.S. patent for its creation.

Like today’s prompters, Oppenheimer’s system used a mirror to reflect a script onto a piece of glass placed in front of the camera lens, allowing the presenter to look directly into the camera. This system was first used by Lucille Ball and Desi Arnaz in 1953 to read commercials on camera. It took off from there.

In 1982, the first prompter operated on a personal computer was developed. It was called the Compu=Prompt and ran on the Atari 800 computer. The system introduced smooth hardware-assisted scrolling. The company that made Compu=Prompt became ProPrompt, Inc. and is still in business today. In 2010, Compu=Prompt received a Technology and Engineering Emmy Award for Pioneering Development in Electronic Prompting.

Today’s prompters have come a long way. Many models are now very low-cost, compact and highly portable, while high-end models come with a range of bells and whistles for studio applications. 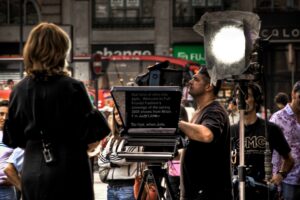 Prompters, however, are not designed to capture emotion or genuine expression from presenters. That’s what actors are for. Prompters are tools to help a non-actor read lines when the wording must be precise or when he or she has trouble making eye contact with the camera.

Many subjects say in advance they don’t need a prompter. They claim to have memorized the script. Then, when the camera comes on, the presenter chokes up and has trouble saying the lines properly. This is why having a prompter on hand and ready to go can save hours of precious time on shooting day.

Especially for on-camera amateurs, having the prompter placed far away rather than up close can help. Eye movement is less noticeable this way. When having to work close to a prompter, make the text as small as possible. These tiny details matter when working in front of a camera.

For most new users, it usually takes some practice when initially encountering a prompter. It is not a natural talent and takes some getting used to. Practice with the subject before shooting. Have the presenter maintain a natural tone and constant speaking speed. Adjust the prompter’s scrolling speed to fit the subject’s natural pace. This will make their speech far more authentic.

Remember, the written word is not always easy to speak. A teleprompter won’t change that. Words and phrases that are easy for some presenters, are hard for others. In the end, the script needs to sound natural to the person delivering the lines. This usually requires a little adjustment that becomes clear during rehearsal.

Prompter software is customizable. It allows users to choose the font size, typeface and color. Adjust these parameters to suit the presenter. Though white text on a black background is standard, it is important to keep the contrast high for easier reading.

On an external video monitor, carefully watch the presenter’s body language when speaking. A stiff performance can be a giveaway a prompter is being used. Try to make sure the person is familiar with the script in advance and relaxed when ready to go on camera. It will become easier to read the script from the prompter.

Unless the script demands very precise wording, allow the presenter to ad lib a bit. It will feel more genuine. The presenter should be given a little creative leeway to inject some personality into the performance. Experiment with the script. It is always possible to do the take again.

There are now many types of prompters, ranging from low-cost models for smartphones and tablets up to glass-type prompters on stands used by Presidents and other speakers. For small video crews, a portable prompter in a carry case can be purchased for a few hundred dollars, while larger studio and glass prompters are far more expensive.

Whatever type being used, a teleprompter is essential gear for many video productions. It can save the day when needed.