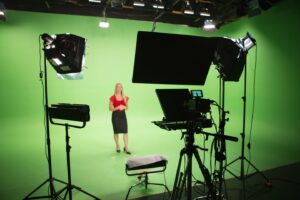 Since the pandemic began, remote television production has exploded. Joe Biden ran for president of the United States from a make-shift television studio in his Delaware basement. Stephen Colbert broadcast his national talk show from a home studio, without his studio audience. Many of us made video calls for work or pleasure — some even did broadcast interviews — from somewhere in our homes.

If we learned anything from this burst of remote television production is the background of a scene has significant meaning to viewers. Some savvy users place carefully selected book titles on shelves behind them to reflect a specific scholarly image. Others don’t care — revealing anything from messy desks, kitchen appliances and unmade beds.

For well-known people, video from home offered a glimpse into details about their private lives. For the unknown, the image may just reflect the clutter in the room. Most people don’t even think of removing these distracting items when doing streaming video calls.

Media professionals, on the other hand, pay close attention to the background used in their off-site studios. The most clutter-free backgrounds are neutral and put a focus on the subject of the video. If not against a painted plain wall, many use blue or green seamless paper to create the best backgrounds. 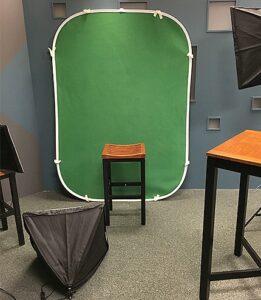 We have entered the era of virtual production, where complete background sets can be projected on huge LED or LCD displays. However, this emerging new technology is still very costly and out of reach for small video studios. The new flurry of off-site production, however, has resulted in the increased use of chroma key using green or blue screens.

Chroma key is a visual effects technique for layering two video streams together based on color hues. It has mostly been used to remove a background from the subject. A color range in the foreground footage is made transparent, allowing separately filmed background footage or a static image to be inserted into the scene.

Chroma keying can be done with backgrounds of any color that are uniform and distinct. However, green and blue backgrounds are more commonly used because they differ most distinctly in hue from human skin tones.

In keying, no part of the subject being shot with the camera may duplicate the color used as the backing. If that happens, that part of the image may erroneously be identified as part of the background.

These techniques are hardly new. George Albert Smith first used a type of keying in 1898. In 1903, The Great Train Robbery, a film by Edwin S. Porter, used double exposure to add background scenes to blacked-out windows.

To have figures in one exposure move in front of a substituted background required a traveling matte. In 1918, Frank Williams patented the traveling matte technique. Traveling mattes were used with both black and white backgrounds and were popular in films from the 1920s onward.

Only a few years ago, chroma keying was an expensive process reserved for professional media producers. Now it done every day with regular Zoom calls and other two-way video services.

When doing a scripted video, the background can have a major impact on how the story is told. Every part of the image is important to the audience. 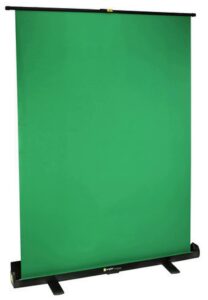 For backgrounds, there are a number of options. Seamless photo paper is available from many vendors. It comes in a range of colors and costs around $60 a roll. Using a paper background setup will allow video from virtually anywhere without background clutter.

To mount the paper, use two light stands and a crossbar. Another option is to cut and tape the paper or fabric directly to the wall.

It is best to avoid bright colored backgrounds such as yellow, orange or red. These can cause color reflections and can be unflattering to the on-camera the subject. Outside of chroma key green or blue, muted tones like gray and other darker fabrics often look best.

One of the benefits of using chroma key is the user can create realistic background images at a very low cost. Essentially, the user superimposes his or herself onto a virtual background or animated digital backdrop. Some online services offer chromakey backgrounds that work against green screens. 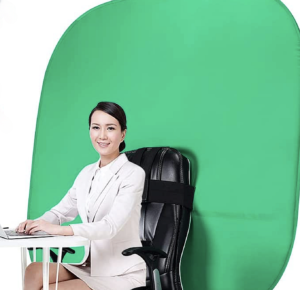 For video streaming done in small spaces outside of studios, there are compact solutions that take little room. One solution is a green screen that clips to the back of a single office chair. These cost less than $100.

Another compact option is the spring-loaded fold-out screen. It can be hung from a wall or from a single light stand. Others can be simply placed on a floor and popped-up like a projection screen. There are now dozens of backgrounds at a wide range of prices.

Knowing how to choose a good background for a video will give the content a more professional look and help the audience focus on the message being delivered. From picking the perfect hue to mounting the backdrop successfully, details matter.

Other tips are to place the camera at the eyeline and about an arm’s length away from the face. Place the lighting source in front of the subject. Use a good microphone, not the built-in mic on the computer, iPhone or streaming webcam.

In order to create an illusion that characters and objects fit into the intended background scene, the lighting in the two scenes must be a reasonable match. This requires finding the right balance for the background and the subject, then desaturating any green color remnants left. There are software tools to help fine-tune these problems. It just takes some experimenting.

With television studios now being built virtually anywhere, chroma key technology is a way to create a professional set without a large budget. When done well, it can add major production value to any video.