One of the main talents of experienced video editors is to make production techniques so invisible that the audience doesn’t notice. The best edits are hidden in the story — unseen by the viewer. This kind of seamless continuity in editing is difficult to achieve, but a sign of an editor who has mastered the craft.

An “invisible” edit marries two video scenes together with two similar frames. The trick is to hide the transition from the audience for a smooth, nearly unnoticeable single long take. When executed well, invisible edits are so fluid that most are unaware there has been a cut.

The invisible edit was invented by the film director, D.W. Griffith, in the early part of the last century. He popularized the techniques that went on to define the basic grammar and narrative format of film. Griffith explored the capabilities of editing in the films he made at the Biograph studio from 1908 to 1913, primarily the use of continuity matches to link shots smoothly.

Why use invisible cuts in editing? One reason is to influence the cultural mores and prejudices lurking under the surface of a production, and to reinforce the audience’s subconscious beliefs and world views. Beyond that, the main purposes are to transcend location and time.

There are several invisibility tools that can be used during the production process. Whichever is used, to achieve the maximum impact of invisible editing, advance planning of the shots is needed. Cuts to different camera positions maintain the illusion that everything is happening in a continuous time and space.

Needless to say, invisible edits are an illusion. It is never easy to do convincing “continuous” shots with cuts. A good example of the impact of invisible editing can have is a new drone video, produced by Minneapolis-based Sky Candy Studios. 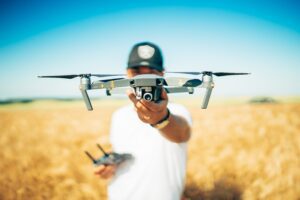 Pilot Michael Welsch gives the viewer a behind-the-scenes look at Chicago’s Wrigley Field using a Rotor Riot Cinewhoop drone equipped with a GoPro Hero 10 camera. Try to find the edits — there are five of them in the film. It is so seamlessly edited that it’s nearly impossible to identify the edit points.

Continuous movement allows the audience to experience what they are observing in real time. The invisible edit makes this happen.

One of the most famous examples of invisible editing is in Alfred Hitchcock’s Rope (1948), a psychological crime thriller. Hitchcock’s entire film was shot and edited to appear as a single, continuous take. His famous storyboarding process allowed him to design a film that overcame the technical hurdles for such a feat. It worked well and became a cinematic masterpiece.

How to Hide a Film Edit 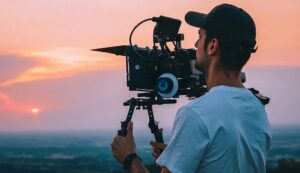 A whip pan and camera occlusion are two common ways to hide a film edit. A whip pan is a camera pan being done at a speed fast enough to create motion blur. It can be accomplished using practical effects — no software is needed. One shot is finished with a whip pan and the corresponding shot is started with another whip pan in the same direction at about the same speed.

The editor then cuts the two shots together, often using a subtle cross-dissolve so the edit appears seamless. This effect can also be simulated in post-production by animating motion in video clips and using blur effects to create a virtual whip pan.

Camera occlusion is another technique for achieving invisible edits. This method uses the physical elements of a scene to obscure the camera for a moment. This was often used by Hitchcock in his film, Rope.

Camera occlusion can also be used in other ways. The camera can be tilted up to the sky and then come back down to reveal another scene. The edit point takes place in the sky.

Some of the most powerful edits are the ones that are never noticed by the audience. This technique is part of magic of creative post-production. As with so many videomaking tasks, invisible editing is an essential tool. Understand and use it. It can be a powerful aid to storytellers.