In video composition, lines on a screen that the eyes follow are called leading lines. They are used to create a visual flow or to emphasize focal points in an image.

Leading lines can be anything in the image. They can be cliffs, rivers and waterfalls or rows of trees and sun rays. They can be man-made structures, such as roads, bridges or train tracks. Even small structures such as window panes and doorways can be used for leading lines. The kind of line chosen suggests an emotional value sought for the story being told in the video. 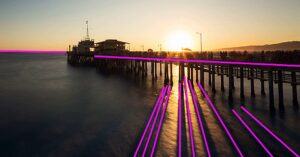 Leading lines are framed and positioned by the videographer to draw the viewer’s eye toward a specific point in the frame.

The term “leading line” originates from the strips of lead that old-time typesetters used to evenly space out lines of text in a document. The word “leading” has stayed with us over time. But, in essence, it’s a typographer’s term for line spacing.

Leading lines can have different meanings depending on their use. Horizontal lines suggest calmness and tranquility; vertical lines convey power and authority; diagonal lines create a sense of movement or change; and curved lines suggest a tranquil, slow mood that simulates the passage of time.

When shooting a video, use leading lines to guide the audiences’ attention to specific areas of interest in the frame. Such lines can subliminally point out to the viewer key clues to the story’s plot. 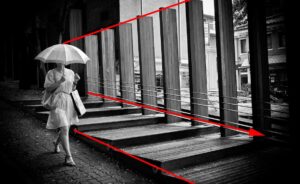 Leading lines are tangible or intangible, created by objects that lead the viewer in the chosen direction. Lines may or may not be straight. Some can be curvy and wavy, or even broken. The lines just have to lead the eyes somewhere in the frame.

Diagonal or curvy lines break up a square format. They also usually run across the entire frame, which cues the audience to scan the entire video frame. It offers flow to the frame’s composition.

Interestingly, we subconsciously use lines all the time in daily life. These lines include everything from painted lines on the street to buildings and roadways. The videographer has to have the ability to see the leading lines and compose the shot to use them effectively.

It is just as important to be aware when not to use lines in a frame. Shooting the wrong lines can misdirect the audience away from the direction you want them to see, causing confusion. 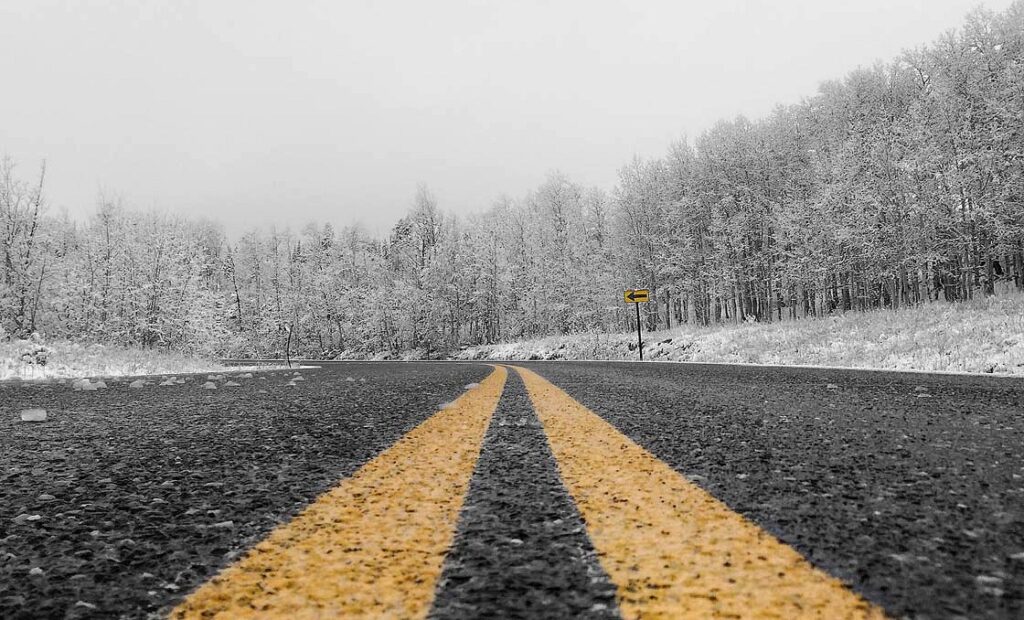 In video composition, the two key elements are depth and pointing the lines towards the desired part of the frame.

Depth is used when the leading lines vanish off in the distance. This creates a more three-dimensional look within a shot. Eyes will instinctually move towards the character by placing the subject just off to the side of where the line goes. Leading lines can create depth in an image.

The depth of leading lines creates a foreground, background and an interest point for the frame. This is an effective way to help pull the audience into the story while also locking the subject into sharp focus.

When a subject is shot against a flat wall, it has no dimension and depth, making it visually boring for the viewer. Going off to the side at a 45-degree angle helps use the leading lines more effectively. Lens choice can also impact how cinematic a shot will look. 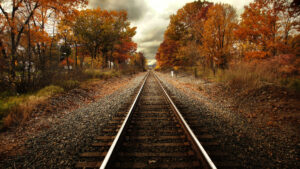 An alternate way to use leading lines is by lowering the camera so the shot looks up at the subject. This influences the perspective and depth of the frame. A similar effect occurs when the camera is positioned in a bird’s eye view. This kind of shot can make the subject look powerless.

Consider how the lines lead into the on-screen subject. Lines can intersect with the subject or lead to the character’s eye line. Also, one can communicate where the subject’s focus is through leading lines.

Our daily life is full of lines. It is up to the videographer’s eye to identify them and use lines to enhance the composition of the image. The whole technique of leading lines is to direct your viewers’ attention in a frame.

Lines can focus on a specific area or the entire scene. The lines chosen or not chosen visually communicate where the video maker wants the audience to point its attention. In the end, it’s that simple.

Leading lines are a powerful tool and should always be considered when composing an image. No matter where a camera operator stands, there are lines pointing in some direction. The trick is to make sure they are pointing to where they enhance your story.