From the advent of pyrotechnics and lighting effects in a theater to rendering out full-scale global destruction in film and television, special effects have been used to dazzle and immerse audiences since the beginning of visual narrative storytelling.

However, this “razzle and dazzle” typically comes with a high price tag. Executing practical effects can be dangerous, time-consuming, and incredibly expensive. Computer-generated effects have been able to circumvent some of the challenges but still require highly skilled artists and budgets far out of the reach of many independent producers.

Fortunately, for those creators with limited financial or logistical reach, there are pre-rendered special effect collections that can be highly effective. They can make your film achieve a larger budget image when appropriately used but without the heavy price tag. 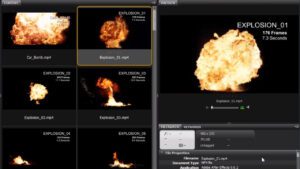 Stock Footage special effects collections are pre-animated and rendered effects for various special effects categories and are compatible with most video editing and compositing software. (Video Copilot, ActionVFX, and BigFilms are just a few of the many companies offering these stock elements.) They are typically grouped thematically and purchased as a collection, or in some cases (such as with ActionVFX), clips can be purchased individually.

Collections are organized by the nature of the effects. Fire, explosions, rain, lighting, magical illusions, blood spatters, flying debris, and more can typically be purchased in a set, each featuring a complete library to select from. These clips will usually feature variations of similar effects. A rain collection, for example, will likely include several full screenshots of raindrops falling at varying densities, different clips of water splashing on the ground, and various versions of water trickling down windows. This variety helps prevent visual repetition and provides a more dynamic effect when layered together. 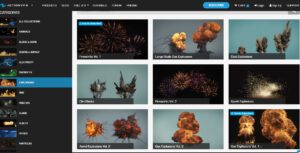 These collections usually provide effects in resolution of 2K, 4K, or higher and include alpha channels for prebuilt transparency. This transparency gives these effects their drag-and-drop nature, allowing you to drop the clip on the timeline, and it’s already superimposed into your footage.

The cost for these collections will vary from one company to another. Still, generally speaking, if you were seeking a fire collection, you can expect to find a quality pre-rendered library for between $99-300. To some, this may seem steep—especially if you need multiple collections for your project—but it’s a mere fraction of the cost of hiring a pyrotechnical team and using real practical fire on a set.

Common Mistakes When Using These Collections

The convenience of these collections is easy to take for granted, and many novice projects scream “amateur” by not taking the time to integrate them properly into their productions. 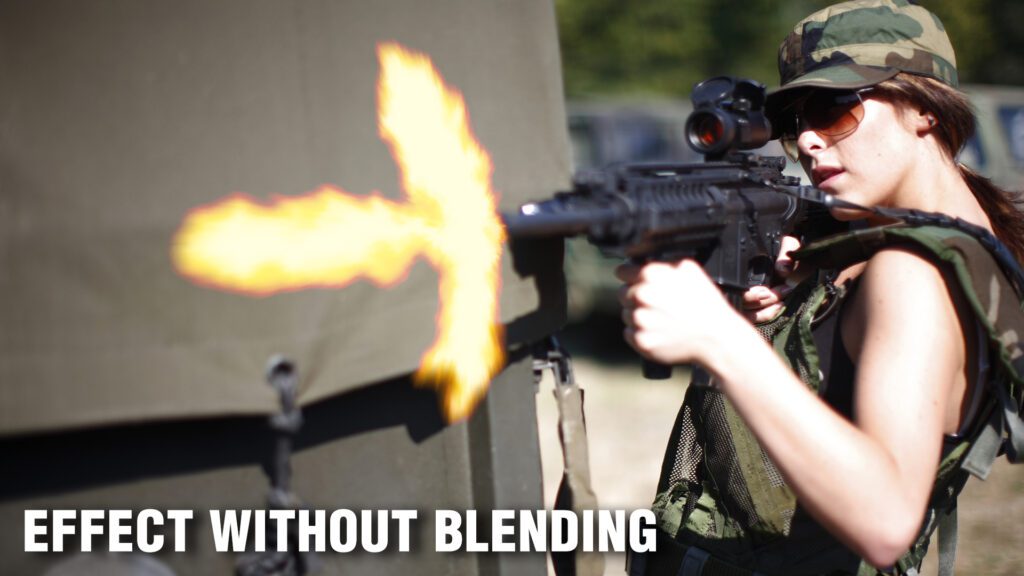 While these effects are drag-and-drop, if an editor simply overlays an effect on the timeline without further integration, it will look like cheap, superimposed animation. These effects generally have very neutral lighting and color saturation and are unlikely to match your source footage naturally. Not to mention they won’t have any interaction (debris, volumetric illumination, shockwaves) with the elements in your scene that was filmed on location.

Another advantage to acquiring these elements in collections is the ability to layer them together to add additional depth and immersion to the visual you’re trying to sell. Rarely just dropping one layer in the project is enough to sell it.

Special effects shots involving a moving camera or objects can pose an additional challenge. Applying layers of fire effects is one thing; using layers over a hand-held or moving shot is another altogether. If you do not implement proper motion tracking, the result could have a “float” to it, appearing uncanny and unnatural. 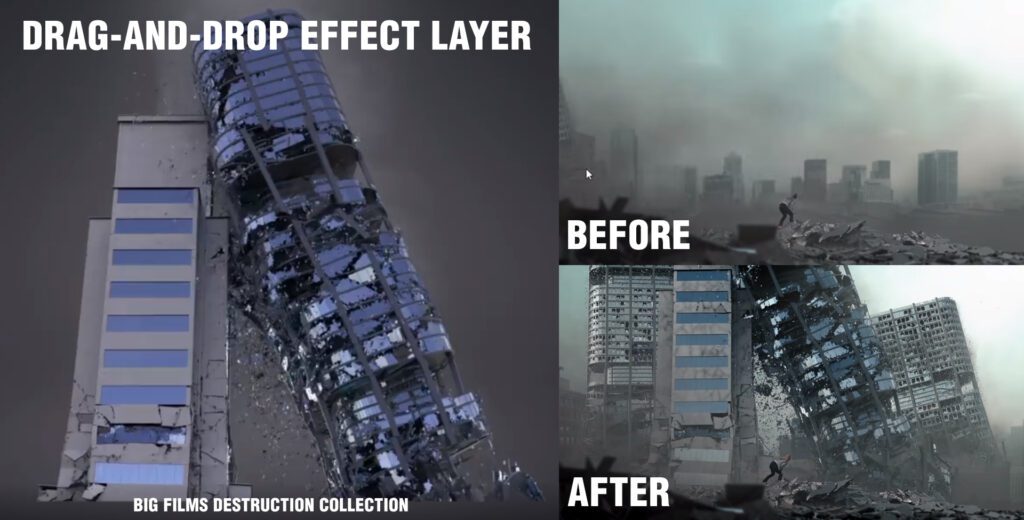 When it comes to cinema, the magic is in the details. In the real world, fire, explosions, water, and building collapses rarely look uniform or organized. A bomb out in a field doesn’t just create a fireball. There is smoke, debris, shockwaves, sparks, and additional fire elements that go along with it. When using these layered effects for a dramatic purpose, the more chaos and grit you can apply to them, the more realistic and dynamic they appear.

The next challenge is matching the color and tone of the scene. Proper color grading is often underutilized in independent and low-budget productions but can often make all the difference. If you are overlaying fire elements into your scene, adjust your color mix so that the ambient lighting matches the hue and saturation of the fire element. If your set is inside an apartment on fire and you’re adding a layer of white smoke, you will need to adjust the tones—perhaps adding some yellow or tan hues—to help it blend naturally into your scene.

The photos below, taken from a short YouTube film by Fade 2 Black Productions, simulated a bomb going off in a field using pre-rendered effects from the Action Essentials collection by Video Copilot. 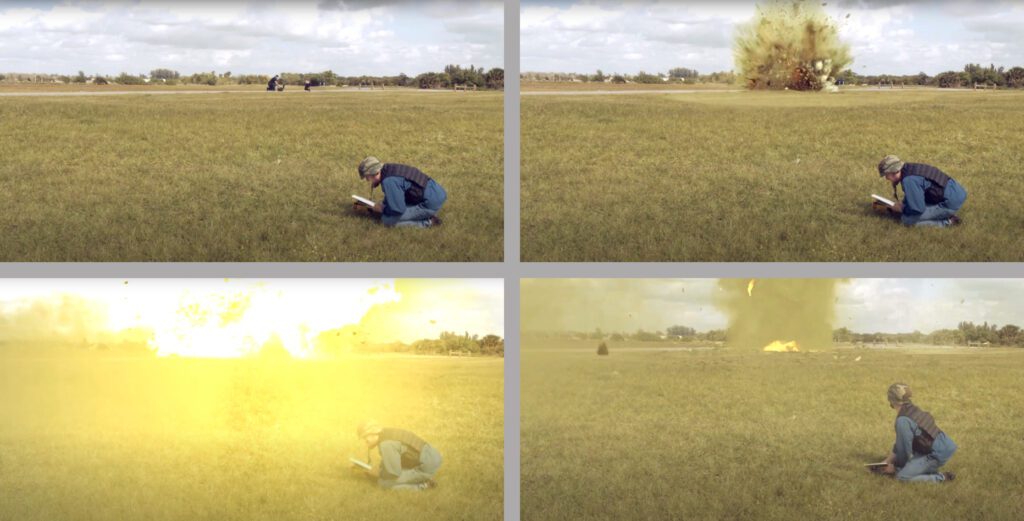 The editing composition consisted of the following digital layers: a small digital charge that created the effect of the dirt lifting from the ground, a more significant dirt charge with sparks delayed by a couple of frames, an animation of a massive explosion eruption complete with a rolling fireball, a layer of black smoke with reduced opacity behind the fire plume, the second layer of lighter smoke with a great spread, a layer from a debris collection to simulate sections of the sidewalk cast outward, additional small fire animations layered around the side for collateral burns, more dirt charges to react to the concrete debris landing in the field, a shockwave animation with a lower opacity and angled to match the orientation of the ground, and a couple of layers of dust and smoke in the foreground to encapsulate the grit of the scene. Each element was color graded to match the yellow/sandy tone of the scene. In the end, the shot was convincing enough to pass and cost the production team only $99 to purchase the collection.

Spending the time to stack and blend in the effects layers will determine whether or not the audience buys into the moment. 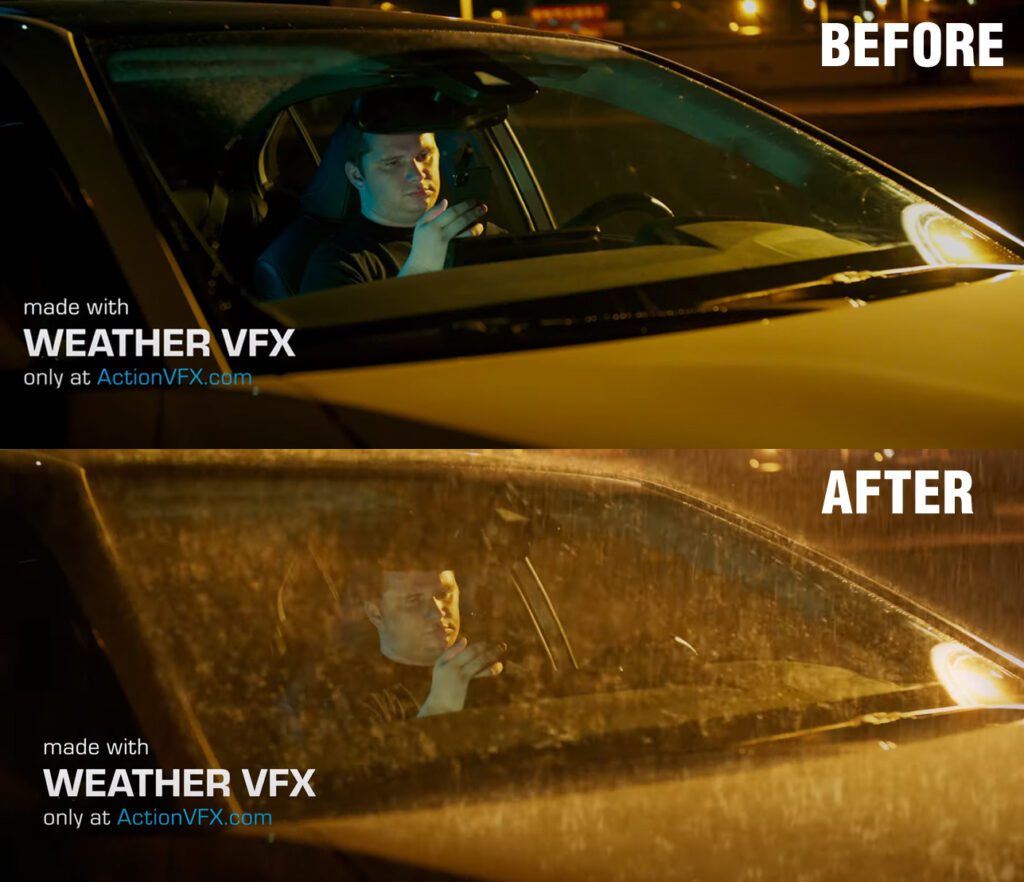 Aside from color grading and layering, you can employ a few more tactics to carry the effects further. The first is, playing with your depth of field. If these effects elements are in the background (explosion, lighting, buildings collapsing), consider using a shallow depth of field and blurring the stock effect layers to match the focus of the environment.

Plan for moving shots. Consider using tracking dots on the same visual plane if a camera shot has to be hand-held or moved. You can use these to lock layers into place while your camera moves. Alternatively, you can film the scene on a tripod, add the effect layers, and add a digital motion effect in post-production to simulate a hand-held feel.

Limit screen time. Sometimes quick edits or cutting to actor reactions can help trim some of the screen time the effect has to be on screen, potentially shaving hours or days off the editing process.

Don’t neglect the audio! Part of selling a great visual effect shot is having a rich soundtrack with it. A gunshot is more believable with a crack, environmental reverberation, metal slide, and ping of a bullet ejection than just dropping in a “pop” stock sound.

By utilizing these collections and investing some time in blending the effects, you can make a small-budget film look like a mini blockbuster.