Using the Dutch Angle to Bring Tension to a Video Production

The Dutch angle — made famous in the German expressionist movement of the early 20thCentury — is used today in video production to portray uneasiness or tension. It is essentially a camera shot with a tilt on the camera’s roll axis.

The effect involves setting a video camera at an angle on its roll axis so that the shot is composed with vertical lines at an angle to the side of the frame. It can also be accomplished if the horizon line of the shot is not parallel with the bottom of the camera frame. The result feels like tilting one’s head to the side.

The Dutch angle in video, also called the German angle, came from the popularity of German films using it during the silent era of film production. One of its earliest uses was in an American silent film — Edwin S. Porter’s Dream of Rarebit Fiend (1906).

The Dutch angle was also known for oblique angles in surrealist drawings. Surrealism was a cultural movement developed in Europe in the aftermath of World War I in which artists depicted unnerving, illogical scenes that disturbed the unconscious human mind.

The leader of the surrealist movement was artist André Breton. In addition to filmmaking, surrealism affected theatre, photography and writing of the era.

Dutch angles are frequently used by directors who have a background in the visual arts to represent madness, disorientation or drug psychosis. The shot has also been used to convey an odd tension that strangers exert on the main character.

As with most specialized effects, it is easy to overuse the Dutch angle. For example, the science-fiction film Battlefield Earth (2000) drew sharp criticism for its frequent use of the Dutch angle. Film critic Roger Ebert wrote “the director, Roger Christian, has learned from better films that directors sometimes tilt their cameras, but he has not learned why.” Ouch!

The Dutch angle rotates the camera around the axis of the lens relative to the horizon or vertical lines in the shot. The shots are usually static, but in a moving Dutch angle shot, the camera can pivot, pan or track along the established diagonal axis of the image.

Any production made entirely of Dutch angle shots would be difficult to watch. The angle would be disorientating and the effect of the shot would be lost with overuse. The best image makers use the Dutch angle very sparingly.

Identifying the most effective time for a Dutch angle shot is the first step in considering its use. This usually begins when reviewing the script. A good argument for using the shot is when a character senses something is wrong and it foreshadows danger.

After deciding a Dutch angle shot is appropriate, it is good to consider ways to enhance the shot. This could be a tilt as subtle as five degrees or as substantial as 90 degrees. The greater the tilt, the more unsettling the shot has on the audience. 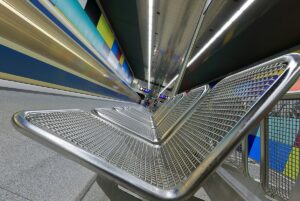 So why does the Dutch angle create tension? The human brain easily processes standard horizontal-vertical lines — like those in standard camera shots. But comprehending angled lines is much harder. The shifted horizon confuses the brain and makes us feel anxious and uneasy.

The use of the Dutch angle is an excellent way to stir the viewers’ emotions and to add interest to a production. It offers an off-kilter perspective, and makes the audience subconsciously feel visual dissonance.

But, like most other types of camera effects, Dutch angles must be used with intention at the right moment. Otherwise, it can become confusing and not make sense to the audience.

The Dutch Angle is one of the most widely used shots today because it creates an impression that forces viewers to see things from an unusual perspective. Use it wisely and it can add impact to a production.