The Hitchcock zoom effect — also known as the dolly zoom, or “zolly” — is a powerful in-camera effect that distorts perspective to create disorientation.

It was first used in Alfred Hitchcock’s 1958 classic film noir, Vertigo. Though the film bombed at the box office, it has stood as one of Hitchcock’s genuine classics and is being preserved as a masterpiece in the Library of Congress. Since Vertigo was made, the first-of-the-kind visual effect has been used in numerous films to undermine normal visual perception. 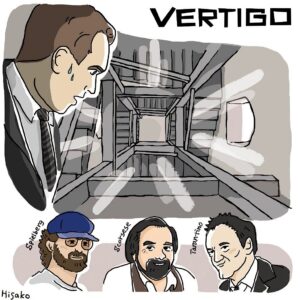 Even if you’ve never heard the name, all audiences most certainly have seen the effect. The background warps impossibly, expanding or constricting around a character. A sudden distortion of perspective zeroes in on the actor.

How the distortion looks and feels depends on which type of Hitchcock zoom is used. If the dolly moves out and the zoom lens moves in, there is greater magnification and a narrower angle of view. This flattens the image and makes it appear as though the background is closing in around the foreground subjects.

If the dolly moves in and zoom lens pulls out, the focal length shortens, creating a smaller amount of magnification and a wider angle of view. This curves the image, giving the appearance of the background expanding around the subject.

The difference between the two types of Hitchcock zooms (expansion or contraction) produces unique emotional responses for the audience. The contraction effect makes the world around the subject seem smaller — evoking paranoia or impending danger. With the opposite move, the world pushes away from the subject. This expands space and can create a dramatic sense of isolation and panic.

The Hitchcock effect is achieved by simultaneously zooming in while dollying toward or away from the subject. The angle of view is adjusted in such a way as to keep the subject the same size in the frame throughout. Perspective is always maintained. The background of the image changes relative to the subject.

For the viewer, the visual appearance is that either the background suddenly grows in size and detail and overwhelms the foreground, or the foreground becomes immense.

When done correctly, the shot creates a sudden sense of unease and disorientation in the viewer. It can signal states of tension, euphoria or dispair. It can make it feel like the floor is dropping out from under you or the walls are closing in. It can shrink distance or send the background reeling off into a void.

As humans uses both size and perspective cues to judge the relative size of objects, seeing a perspective change without a size change is a deeply unsettling effect — often with strong emotional impact.

The Hitchcock effect was conceived by Irmin Roberts, a Paramount second-union cameraman working for Alfred Hitchcock on Vertigo. Since then, it has been used on a wide range of films, including Jaws, Goodfellas and the Lord of the Rings.

The effect is commonly used to suggest a character is undergoing a realization that causes them to reassess everything they had previously believed. In Hitchcock’s Vertigo, the effect demonstrates the terror as a character climbs the church stairs — without a word of dialog.

The shot was originally conceived to visually convey acrophobia, or the intense fear of heights. It puts the viewer into the character’s mind to feel a disturbed mind. The shot works only when tied to the emotions of a character. It should never be used without good reason or as a visual gimmick.

Executing a Hitchcock zoom takes a bit of practice, so do a few takes to make sure the effect works. When done correctly, it will have a real impact on the story.

The Hitchcock zoom can look weird because — quite literally — it is breaking our brains. When it works, it is naturally unsettling.

Pablo Picasso once said, “Good artists borrow. Great artists steal.” Video is no exception. The effect that Hitchcock introduced can be found in some of the best films of the past fifty years. Great directors in video utilize the effect to serve their stories in different ways.

How to do the Dolly Zoom:
youtu.be/GNoVvNCY0Bk