Time-lapse videography is a technique in which the video frame rate is much lower than the frame rate used to view the scene. When video is played at normal speed, time appears to be moving faster.

A scene may be captured at one frame each second but then played back at 30 frames a second. This is a 30 times speed increase. The technique is called lapsing.

Video can also be played at a much lower rate than the one used to capture it. This is slow motion.

In the film days, time-lapse was called undercranking – meaning to advance the film in the camera more slowly than it would be played back. A similar technique was stop motion animation. An example of this is a puppet which is repeatedly manually moved a slight amount and photographed with each movement. When played back, the frames appear to show the puppet in motion.

These motion techniques have been used for a range of scenes, including crowds, traffic, rivers and plant growth. The effect of shooting a subject that changes imperceptibly slowly, creates a smooth impression of motion. A subject that changes quickly is transformed into a hyper-active image. 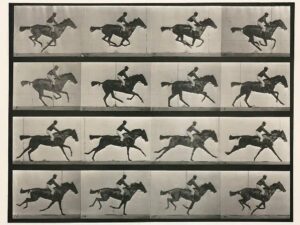 Time-lapse photography began in 1872 when former California governor Leland Stanford, a racehorse owner, hired Eadweard Muybridge to prove whether or not the hooves of race horses ever are simultaneously in the air when running.

The experiments progressed for six years until 1878 when Muybridge set up cameras every few feet along a racetrack. Each camera had a tripwire that activated the shutter as the horses sped by. The photos taken from the cameras were then compiled into a collection of images that recorded the horses running. The photographs showed that all four of the horse’s feet are sometimes simultaneously off the ground.

In 1897, the first use of time lapse photography in a feature film was in Marie-Georges-Jean Méliès’ Carrefour De L’Opera. After that, the technique was widely used in film production.

Perhaps the most celebrated pioneer of the technique was Dr. John Ott, a banker whose hobby was time-lapse film photography. Ott built a large greenhouse full of plants, cameras and a custom automated electric motion control system for moving the cameras to follow the growth of the plants. His work was featured on a late 1950s episode of the ABC TV show, You Asked For It.

Ott discovered that the movement of plants could be altered by varying the amount of water they were given and changing the color temperature of the studio lights. Some colors caused the plants to flower while others made them bear fruit. Light temperature could also change the sex of plants.

By using these techniques, Ott’s animated plants danced up and down in sync with pre-recorded music tracks. His cinematography of blooming flowers was used in the classic 1958 documentary, Secrets of Life, from Walt Disney Studios.

Though time-lapse techniques have long been used with film, only in recent years have video cameras been capable of recording at variable frame rates.

For greater accuracy in time increments and consistency in exposure rates, a device called an intervalometer was developed. It regulates the motion of the camera according to the interval of time between frames.

There are both software and hardware versions of intervalometers. They can be connected to motion control systems that move the camera on any number of axes during time-lapse photography.

In modifying the speed of a camera, the relationship between the frame interval and exposure time is an important factor. This relationship controls the amount of motion blur in each frame. 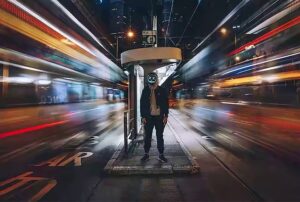 Some of the most impressive time-lapse images are created by moving the camera during the shot. For example, a camera can be mounted to a moving car to create the illusion of extreme speed. To achieve the effect of a tracking shot, it is necessary to use motion control to move the camera.

When the image is projected, it appears the camera is moving at a normal speed while the world around it is in time lapse. This effect can greatly heighten the illusion.

Rigs are also used to move the camera during exposures of each frame— blurring the entire image. Under controlled conditions, usually with computers carefully making the movements during and between each frame, some very interesting blurred visual effects can be created. This is especially true when the camera is mounted on a tracking system that enables its own movement through space.

Time-lapse can also be combined with high dynamic range video. One method to achieve HDR involves bracketing each frame. Three images are taken in immediate succession at separate exposure values to create a group of images for each frame. These represent the highlights, mid-tones and shadows. These three versions of the image are consolidated into individual frames and turned into video. 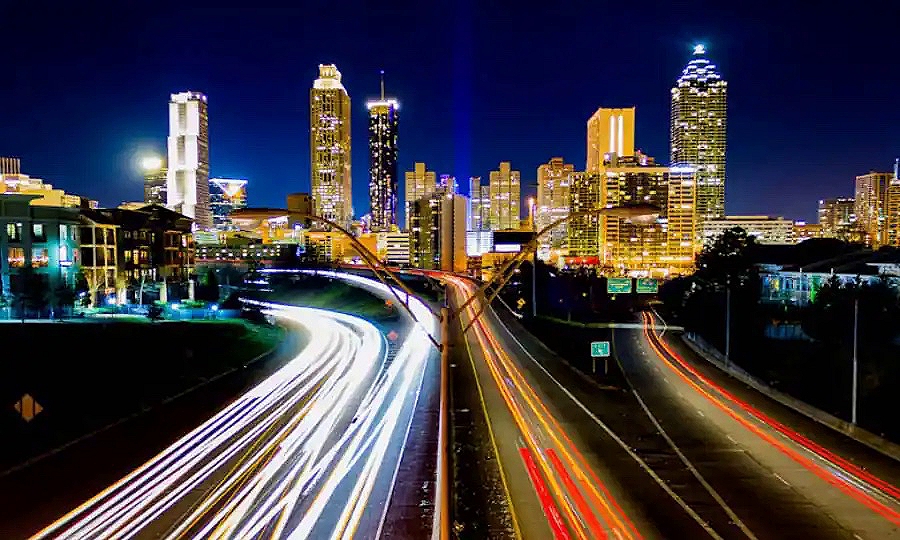 To do a time-lapse shot, set the camera to the time-lapse mode in the menu or connect it to an intervalometer. The changing exposure of the camera must be calculated throughout the day.

When shooting in daylight, add a polarizer to the lens when the sun is very bright. It is OK to underexpose footage shot earlier in the day. A camera flag can prevent unwanted lens flares and also keep the camera cool in very warm climates.

Make sure the camera cannot move. Use a tripod or other mounting device to ensure it stays totally still. Any unintentional camera movement can ruin a time-lapse shot.

Keep an eye out for any debris that gets on the lens. It is best to keep a can of compressed air nearby to gently remove any dirt. This avoids having to physically touch the camera.

With today’s digital technology, time-lapse and slow-motion video is easier to produce than ever before. It is another powerful tool that can make impressive and compelling storytelling.