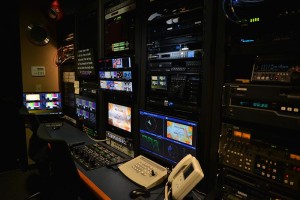 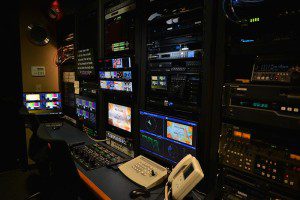 streaming sessions during its popular Bible school. The house Valley-Baptist-Control-Room-Resizedof worship also shares its video content via social media and makes on-demand recordings available online. The church often relies on its volunteers for its video production, so Valley Baptist needed equipment that was both user-friendly and high quality for its HD upgrade. The HVS-2000 video switcher proved to be the best switcher for the house of worship’s needs.

“Before we began this project, we knew FOR-A as a respected company with smart technologies at great price points,” said Dave Kalahar, the Director of Media and Broadcasting for Valley Baptist Church. “We were sold on the HVS-2000 switcher after seeing it at the NAB Show last year, and found that no other switcher compared to it. The HVS-2000 switcher was designed with such smart engineering. We also had a chance to learn about other great gear that FOR-A had on display at the show, and we found the product integrations made perfect sense for us. We felt confident relying on FOR-A technology for such a large part of our HD control room upgrade, and they have not let us down. We’re extremely pleased with the performance of our FOR-A equipment package.”

Valley Baptist recently underwent another major endeavor to strengthen its congregation: a 5-million dollar project that included purchasing and remodeling a nearby 35-acre church, Valley-Baptist-Control-Room-Engineering-Resizedwhich is used as a satellite location with live music. The HVS-2000 streams sermons from the main campus to the new satellite church.

With no downtime allotted in its transition to HD, Valley Baptist underwent its upgrade with the goal of gutting the old facility and having a new control room up and running in less than a week. From start to finish, the project was done in six days and went live the end of last summer. Kalahar credits the diligent efforts of Blue Hat Design and FOR-A in getting the job done so quickly.

“FOR-A went above and beyond to make it happen for us,” said Kalahar. “Their engineers built an identical system in Japan so that they could immediately troubleshoot any issues right from their location. The integration between all of our FOR-A equipment is seamless, and it helps us effectively convey our message to our congregation on a daily basis.”

About FOR-A
FOR-A is a major manufacturer and distributor of video and audio systems to the broadcast, postproduction and professional video markets. For more information about FOR-A’s product line, call 714-894-3311 or visit our web site at www.for-a.com.