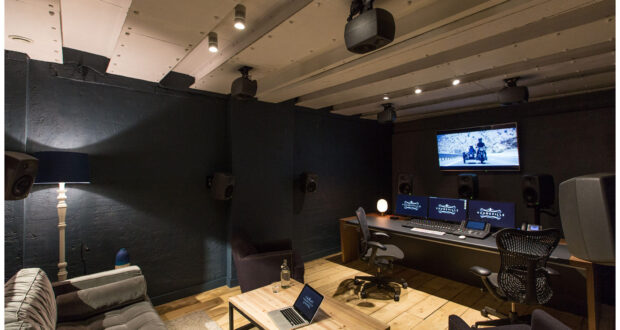 LONDON, NOVEMBER 10, 2021―For 15 years, Vaudeville Sound Group has been serving London as a premier global post-production house for TV, film, broadcast, gaming and documentary work. First opened in 2006, the company has expanded to locations in Los Angeles (circa 2013) and Vancouver (circa 2020), and recently completed its 35th sound studio. Today, Vaudeville has more than 60 creatives in various departments, including sound design and dialogue editing, as well as ADR and mixing. Its roster of clients spans the world with major networks and brands, such as BBC, Netflix, Amazon, Apple, Disney, Animal Planet and National Geographic, among many others.

Through years of growth and expansion, Vaudeville has consistently turned to NUGEN Audio for its array of accurate, clear and concise audio production solutions. “We always meet up with NUGEN Audio at conferences to brainstorm new ideas,” recalls Jones. “There has forever been this parallel in interest and growth between Vaudeville and NUGEN.”

“We recently completed the world’s first immersive history podcast series, Amazing War Stories, which was created in Ambisonics and mastered to binaural and was done to feature film specs for the sound design and mix,” says Jones. “It was a whole new opportunity to explore sound in a different way. For us to take podcasts and produce a full dramatic and immersive mix was amazing.”

Hatfield, who led that particular project, used Halo Upmix with the 3D extension. “I did that one in third order Ambisonics to give all the music that huge and detailed sound,” he says. “There was so much space to work with on that project. It was very orchestral, so I found I could split high frequencies and low frequencies above and below. Overall, I use Upmix quite extensively to have control over space and width. It’s just great.”

Jones and Hatfield also credit NUGEN’s ability to offer the most up-to-date audio solutions to meet the ever-evolving standards and audio delivery formats, such as immersive sound, as key to the brands’ long-standing relationship. “We built our first Dolby Atmos studio at our base in Shoreditch six years ago, and now all of our studios are spec’ed for Dolby Atmos,” explains Jones. “The immersive sound experience including working in Ambisonics and Dolby Atmos has really been exciting. A big part of accomplishing this kind of work is having the most high-quality gear and tools, like NUGEN, available.”

Jones goes on to explain that NUGEN’s Halo Upmix has helped the team at Vaudeville provide clients with an advanced sound experience. “Immersive sound allows you to story-tell better because you can play with it and absorb people into it, and Halo Upmix is a big factor in that,” he adds. “I’m excited about that whole immersive world, especially in social media, gaming and film. We’re spending a lot of time with directors and creatives to try and demonstrate the potential of that world now.”

Vaudeville also makes use of NUGEN’s VisLM loudness meter and, according to Hatfield, it is an integral part of the facility’s template used worldwide. “VisLM features a full set of international and regional presets to obtain accurate loudness and is especially useful when bringing audio content in from various sources for a mix,” he explains. “Whenever our sound designers open a mix, you’ll see that we always use VisLM for all our loudness compliance needs.”

Hatfield praises VisLM’s visual feedback as he says that feature makes it easier to mix. “You can have the plug-in on the screen just in the corner of your eye and you know what’s going on because you can make color coded presets for particular areas,” he says. “You can easily read that meter without having to concentrate on it too much. It takes away having to mix to numbers because it’s intuitive.”

Another major NUGEN plug-in that the studio uses is LM-Correct, which it incorporates as a self-QC. “Every suite has that software, and it’s another level of checks to make sure that we’re compliant,” adds Hatfield. “The fact that we never really use the render button on LM-Correct and mostly just analyze the sound, is a testament to how great VisLM is, because everyone mixes it to spec anyway.”