The season finale of CBS’s political drama ‘Madam Secretary’ aired last week, closing with Secretary of State Elizabeth McCord (Téa Leoni) revealing her plans to run for president to her husband Henry (Tim Daly). VFX Legion followed up the cliffhanger with the release of a breakdown reel that takes a behind-the-scenes look at the making of some of the most complex and exacting photorealistic computer-generated environments created by the Los Angeles-based studio for the show’s fourth season.

Set in DC, the capital’s iconic landmarks, monuments, and buildings bring authenticity to the politically charged drama, which is no small feat for a series shot in New York City. This season, ‘Madam Secretary’ brought VFX Legion onboard to help keep things real, while streamlining the production. Its team’s experience and technical ingenuity were tapped to create large-scale set extensions and meticulously detailed CG environments that stood in for a number of practical location shot

The seeds for the show’s collaborative relationship with Legion were planted last spring when VFX executive producer Reid Burns screened its reel for Tony Palermo, a producer on the series. Clips of precise digital replicas of DC’s

monuments, the White House, historic landmarks and mega-sized set extensions got Palermo’s attention. A few months later the studio was brought onboard to produce challenging computer-generated environments, indistinguishable from footage filmed on location.

VFX Legion’s first task was to create a CG replication of the White House for a large greenscreen set up. Helmed by founder, creative director, and senior visual effects supervisor, James David Hattin, itsartists met the challenge, as well as the show’s tight deadline, and went on to create a variety of true to life CG shots from the ground up. Legion’s library enabled the company to expedite the production of many the effects by building on existing assets.

The studio helped take the role of visual effect to the next level, augmenting footage with shots that would have been impractical or impossibleto shoot live. Its team created a digital doppelganger of Joint Base Andrews, the US military facility that houses Air Force One, and

a real-world inspired digital rendering that used the Mosul Dam in Iraq as its frame ofreference. The CG assets supported expanded storylines with scenarios that included the Secretary of State visiting these off-limit locations.

New York to gather data on tracking, camera angles, green-screen placement and other specs, while efficiently working with the LA team as a single unit to ensure that the computer-generated scenes precisely matched the live-action, as well as the look of the show.

“The bookends for season four’s finale were a digital reproduction of the Lincoln Memorial in Washington D.C. The iconic landmark is familiar to millions of people throughout the world. Viewers

have would instantly pick up on any inaccuracies, so every detail had to be spot-on,” says Hattin. “It was a challenge to perfectly align the elements built on the stage with the CG renders so that they blended seamlessly.”

Legion’s team used a variety of tools that included Maya for creating 3D, Redshift for 3D rendering, Syntheses for tracking, and Nuke for compositing. 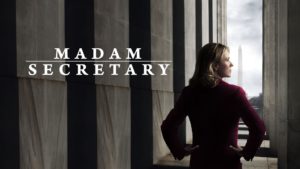 “VFX Legion is thrilled to have been given the opportunity to work on ‘Madam Secretary’ and elevate the role of visual effects on the series,” says Hattin. “Working with the show’s team has been a great experience. We’re very proud of the quality of work that we the contributed this season.”

Launched in 2013 with a pioneering pipeline at its core, founder, CD, senior visual effects supervisor, James David Hattin, and the LA-based studio’s veteran management team, support staff, and collective of 70+ skilled artist work as an efficient unit, meeting the challenge of high shot counts and tight deadlines for multiple projects with ease.

Legion’s TV credits include ‘How to Get Away with Murder,’ ‘Madam Secretary,’ ‘Suits,’ ‘El Chapo,’ ‘Eye Candy,’ ‘Revolution, and ‘Gone,’ to name a few. ‘Hardcore Henry,’ ‘Sinister 2,’ ‘The Purge: Election Year’ and ‘The Purge: Anarchy’ are among its film credits.

The studio is currently readying to begin work on its fourth season of the Shonda Rhimes series, ‘How to Get Away with Murder, and wrapping up work on two feature films, award-winning Director X’s remake of 70’s classic, ‘Superfly’ and the highly anticipated hundred-million-dollar epic film, ‘Asura.’ For more information on the studio visit VFXlegion.com.