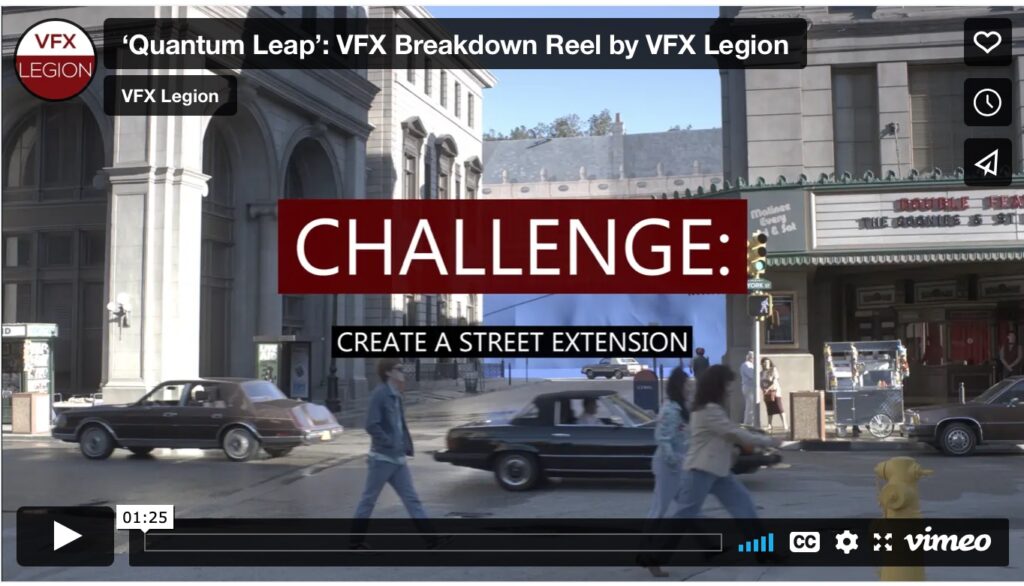 The show picks up 30 years after time-traveler Dr. Beckett (Scott Bakula) stepped into the Quantum Leap accelerator and disappeared as a new team restarts the project. The story follows lead physicist Dr. Ben Song (Raymond Lee) on an unsanctioned leap through time and space to a succession of locations – navigating new challenges while trying to find his way back to the present.

The initial CG work for the first episode, July 13th, 1985,’ called for sets built on a backlot at Universal Studios to be digitally extended, creating expansive cityscapes replicating bustling downtown Philadelphia – circa 1985. To achieve the final shots large green screens strategically positioned at the end of short stretches of fabricated streets were replaced with renderings of historically accurate buildings and signage. Animated pedestrians and vehicles move in sync with the pace of the city.

“The pilot was scheduled to premiere September 19th, giving us a three-week deadline – more than enough time for our team to deliver the scope and caliber of shots the show demanded,” says Hattin. “However, that window was cut down to one week when a promo incorporating several of Legion’s visual effects was slated to air during the NFL pre-season games.”

“Our team met the even more challenging accelerated deadline with ease, thanks to the flexibility and real-time connectivity of Legion’s cutting-edge remote pipeline – and the caliber and scale of our tightly integrated collective of extraordinary senior talent,” adds Hattin.

Legion, a global company with studios in Los Angeles and British Columbia, assembled a custom-tailored team drawing upon the meticulously vetted international pool of talent the pioneering remote visual effects studio began building in 2013 before opening its doors. Hattin immediately reached out to Eugen Olsen, an experienced lead compositor based in Johannesburg, South Africa working with a small team under his banner, Alpha VFX.

The artist used Unreal Engine as his primary tool for ‘the job. Integrated into Legion’s pipeline, Unreal enabled shots to be rendered in real-time – optimizing efficiency and making it easy to adjust workflow and enhance shots further down the pipeline.

Olsen has been a member of Legion’s core remote team for nearly five years. He has collaborated with Legion’s supervisors, producers, and artists on visual effects for dozens of films and television episodic shows over the years – from ‘Scandal’ (2015-2018) to recently released films, including ‘Ambulance’ (2022), ‘DMZ’ (2022), and ‘The Black Phone’ (2021).

Eugen is a top-tier compositor committed to finding innovative solutions that maximize the potential of technology and elevate visual effects,” says Hattin. “He embraced Unreal Engine early on, tapping the efficiency and power of the real-time 3D tool to accelerate the remote production of photoreal visual effects. Eugen’s skill as an artist coupled with a forward-thinking approach to remote visual effects production makes him a great fit with Legion and our company’s ethos – as well as an invaluable to this project.”

“The advantage of real-time remote production remains essential to VFX Legion’s ability to provide films and episodic series with a resource that clients can rely on to meet their visual effect needs,” adds Smalley. “Leveraging exceptional talent, strategic workflow, and tools that accelerate the production cycle enabled Legion to meet the show’s tight deadline while leaving more time to focus on elevating shots beyond the client’s asks.”

Legion is currently working on visual effects for an upcoming episode of ‘Quantum Leap.’ The first season of the new series is currently airing on NBC Television Network and available for viewing on Peacock Streaming Platform.