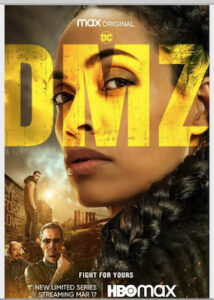 VFX Legion, the pioneering remote visual effects company, created a mix of digital effects for HBO Max’s dystopian miniseries, ‘DMZ.’ Produced by Emmy® winner/Oscar® nominee Ava DuVernay, and Emmy® nominee Roberto Patino, ‘DMZ’ is based on the DC comic book series of the same name. Set in the not-to-distant future during the Second Civil War, the drama unfolds in New York City, a demilitarized zone abandoned by the country and ravaged by violence.

The LA and B.C.-based company was brought on board at the start of the second episode to craft some of the complex effects that help shape the show’s visual landscape in the final three episodes of the four-part limited series. The 59 final shots delivered by Legion seamlessly blend photorealist digital elements of a fictional post-apocalyptic New York with footage of the real world.

Senior VFX Supervisor James David Hattin and VFX Producer Nate Smalley, the co-founders of Legion, headed up the project. Drawing from a diverse international collective of home-based talent the company began building nearly a decade ago, they assembled a team of VFX supervisors, producers, compositors, CG artists, animators, tracking artists, matte painters, VFX coordinators, and QC managers, tailored to meet the needs of the series. Hattin provided artists with creative direction, supervising the project through every phase of the production, ensuring that the effects aligned with creator and showrunner Robert Patino’s vision.

The city of Atlanta stands in for a war-ravaged Manhattan, with the help of visual effects. Legion’s team used a mix of effects to create environments echoing the look of iconic locations in New York City. For a pivotal scene that plays out in front of the State Capital Building, the team digitally defaced the facet of the existing structure, adding graffiti, boarded up windows, and other CG assets. The abandoned, deteriorated building provides the backdrop as two power-hungry warlords, Parco (Benjamin Bratt) and Wilson (Hoon Lee,) deliver rousing speeches to shore up votes as they vie for the post of governor. Alma ’Zee,’ (Rosario Dawson), a medic, shares her vision of the city’s future. 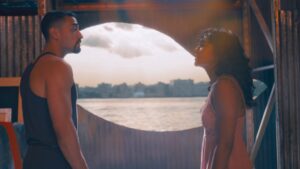 VFX Legion’s team augmented footage of the Hudson River and the cityscape in the distance, replacing blue screen shot through a hole in a wall with a panoramic view of the river. Artists removed sections of the shoreline, boats, and other elements captured by the camera, and seamlessly blended stretches of CG buildings and landscaping to create the vista.

Military tanks filmed inside a parking garage appear posted at the perimeter of the DMZ and then driving out of the city in the final scene of episode four. Interior elements were painted over and replaced with worn buildings, and graffiti-covered walls, transporting  the vehicles to the exterior environment. A painted road and CG buildings are among the digital elements integrated with footage shot in an underground tunnel, adding a view of Manhattan to the scene.

Production on DMZ’ took place in 2020, with visual effect production beginning in 2021, after the onset pandemic. VFX Legion, a fully remote company since its launch in 2013, brought a long-established pipeline, procedures, and creative resources refined over the years, and nearly a decade of experience helming home-based teams to its work on the project. Tapping the full potential of a collaborative approach to remote visual effects, the company delivered the high-quality, innovative, and efficiently produced effects that ‘DMZ’ demanded.

The range of tools used to create the effects for ‘DMZ’ include The Foundry’s Nuke for compositing, Houdini SideFX, Autodesk’s Maya for animation, and proprietary technology integrated into Legion’s pipeline.

All four episodes of ‘DMZ’ are currently available for streaming on HBO Max.