The production was just shy a few shots when the pandemic brought shooting to a halt. The lockdown prevented the crew from getting back out to shoot the plates necessary for the movie’s penultimate scene. VFX Legion digitally created the sequence’s pivotal elements, delivering computer-generated effects that blend seamlessly with the footage.

The film follows the story of a Mexican executive and a free-spirited American who learn from their ailing father that they are half-brothers. Rather than answer his sons’ questions, the patriarch maps out a road trip tracing his event-filled migration from Mexico to the United States. The route is laden with clues that ultimately reveal the secrets of their father’s mysterious past.

CG Supervisor Rommel S. Calderon modeled and textured a mix of computer-generated street signs integrated into original footage of the New Jersey Turnpike. The digital elements transformed the shots, creating the look of a freeway cutting through South Texas as the brothers head north on the road in an old Mercedes-Benz wagon. 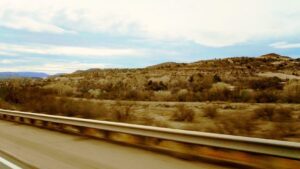 Before: Footage of landscape along NJ Turnpike

The immigrant father mapped out a route leading the siblings to pieces of a puzzle revealing the dramatic events that altered the course of his family’s life. While driving, the brothers spot the building that holds the final clues to the old man’s past.

Provided with photographs of a Spanish-style 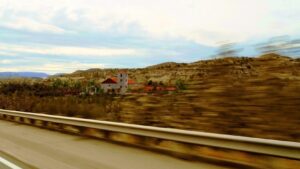 After: Shot augmented with CG model of a mission and digital elements tracked to create view from car driving along a freeway in Texas

mission, Legion’s team built a CG model recreating the structure. Artists integrated the building and other CG elements into the stock footage creating the view as seen by the brothers from the moving car.

It was important that the digital imagery invisibly married with the original footage filmed on location. Pulling this off required considerable technical and creative ingenuity. 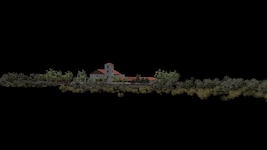 The environment was designed and built entirely in CG. Calderon constructed a replica of the mission in 3D with photorealistic detail using Autodesk‘s Maya. Tracking artist Ruy Delgado synced the movement of the vehicle’s virtual view as it drove along the freeway adjusting camera angles and pushing the shots to blend the effects     CG 3D model f Spanish mission invisibly within each frame. 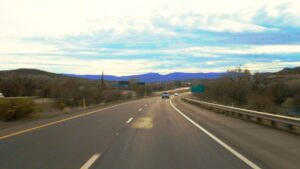 Before shot of stretch of NJ Turnpike

“During the past eight years, Legion’s work on films and episodic series – season after season – has earned us a reputation as a company that consistently delivers large shot counts of complex, high-end visual effects on tight deadlines,” adds Hattin. “‘Half Brothers’ provided us with an opportunity to work with the film’s incredible team and apply the scope of our remote company’s capabilities and the expertise of our collective of WFH artists and veteran management team to creating effects that exceeded expectations.”

About VFX Legion:
Based in Los Angeles and British Columbia, Legion was launch in 2013 as a fully remote company. Founder, industry veteran James David Hattin, the architect of the pioneering collaborative remote at Legion’s core, created the company to provides productions with the advantage of visual effects services that tap the full potential of digital connectivity. (WFH Reel)

Its ever-growing collective of 250+ WFH senior artists, drawn from the vast global pool of exception visual effects talent over the years, collaborates as a single unit in a unique virtual work environment. Legion has created visual effects for a long list of feature films and hundreds of episodes of high-profile television series with fully remote teams for almost a decade. For more information about VFX Legion and its services: , [email protected], 818.736.5855.