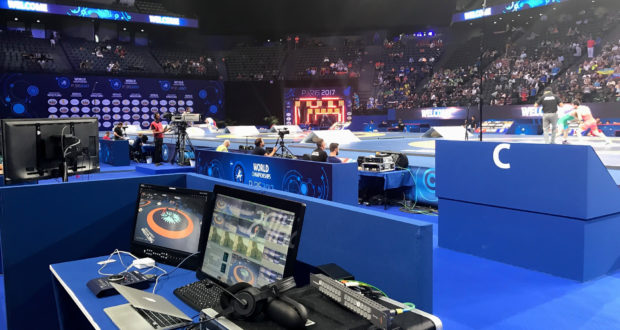 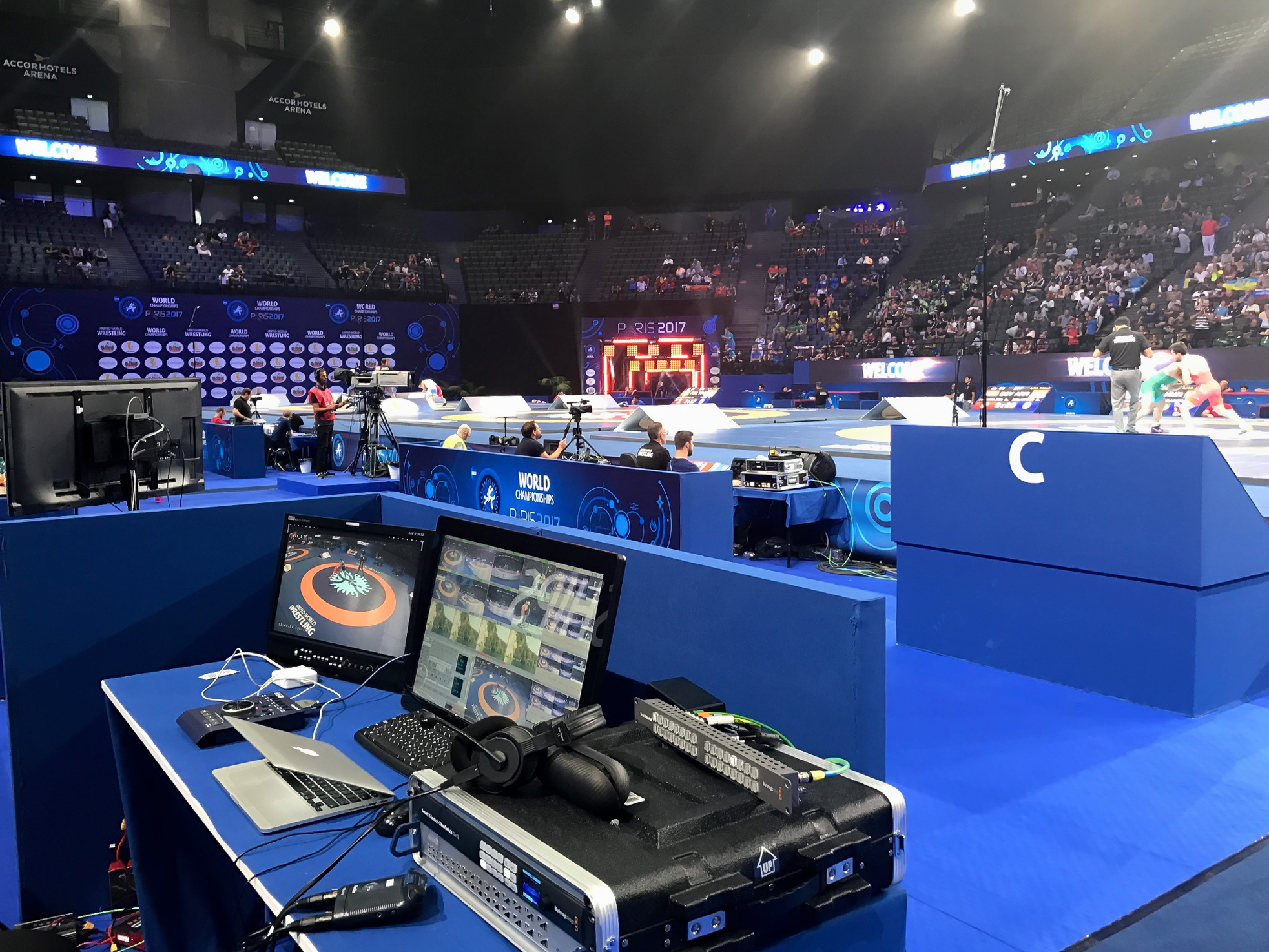 The 2017 Wrestling World Championships in Paris relied on the videoReferee® video judging system to support the judges with fast video replays and multi-angle camera signals. The Wrestling World Championships, which took place from August 21-26 in Paris, for the first time was supported by acclaimed video judging system videoReferee®, provided by slow motion and replay specialist slomo.tv. The team of German System Integrator Broadcast Solutions GmbH was on site during the complete tournament to operate the system and to help the video referees in charge.

With two systems (eight channels each) videoReferee® covered all four mats, with the possibility of marking and reviewing dubious scenes during ongoing recording. The video judging system videoReferee® implemented four-camera technology to provide a multi-angle review for each of the tournament’s four mats. During the tournament the videoReferee® system was used more than 30 times to clarify dubious situations and proofed its smart functionality, speed, ease of use and reliability.

In a recent release United World Wrestling Association president Nenad Lalovic commented on the use of videoReferee®: “We are ensuring our athletes that we are doing everything to make the correct call. There are more than 800 matches at the World Championships and this new system gives referees, coaches and athletes the confidence that the correct call will always be enforced.”

The setup in Paris included two videoReferee® systems with eight channels each, that had access to 4 cameras covering the action on every mat. The system not only offered camera signals to the video referees, located on the side of the mat, but also delivered signals for streaming purposes and for broadcast to the venue’s big screen.

The additional cameras were streamed at the United World Wrestling website to be viewed by fans all over the world. The 4-camera system was the first-ever implementation of multi-camera technology during the qualification rounds of wrestling at world championships.

Sebastién Guenat, Director of IT department at United Wrestling Association, comments on the decision to use videoReferee® during the World Championships: “We decided to move to a 4-camera system to improve the quality of the referee decisions. We very much appreciate the team support from Broadcast Solutions and we are very satisfied with the use of the videoReferee® system during the tournament.”

The overall setting at the venue consisted of four mats with simultaneous fights going on at each mat. One videoReferee® system covered two mats and forwarded the signals to the video referee’s monitor set, where he had the full view on all action happening. On each mat four cameras were located (3 Micro cameras, 1 hand-camera) to cover the action in a multi-angel setup. For streaming purposes one camera signal on every mat was routed directly to a web presentation tool as well as two signals from the videoReferee®, offering slow-motions and additional viewing angels. Further signals coming from the videoReferee® were forwarded to the Scoreboard Stage Screen and to the venue’s Big Screen.

During the tournament the rules for using the video judging system are as follows. In case of dubious scenes, a video replay can be claimed in two different ways. One of the trainers can request a Challenge by throwing a cuddly toy on the mat. During the replay of the scene the replay signal is broadcasted on the big screen, to be seen for all people in the venue. Therefore all fans know exactly what is happening in the particular moment – an important decision to increase the fan experience. A second use of the videoReferee® is a Consultation: Referees request a video replay and check dubious scenes in a private session.

With the Wrestling World Championships videoReferee® adds another major sports event to its list of outstanding performances.

You find more information about the videoReferee® system and its use in different sports on our website: broadcast-solutions.de/en/products/videoreferee