Controlling light and shadow is a key skill for today’s creative videographer. With modern cameras, “quality” of light is far more important than “quantity” of light.

The artistic application of light can transform a bland, flat two-dimensional video image into a compelling three-dimensional illusion. The modeling and shaping of an image with light is one area in the video production process where art overshadows science.

Virtually all of today’s professional video crews have at least some basic lighting hardware. Usually there is an LED light kit with three or four instruments, stands, barn doors and mounting accessories. But far fewer crews come equipped with lighting control materials (usually rolls or sheets of deep-dyed polyester) that can literally save the day in many location lighting situations.

While the white balance adjustment on a video camera can quickly color correct an overall scene, light control materials allow selective filtration of light sources within the scene. By color matching these various sources, the camera sees all the light as one type and the result is more even color balance throughout the scene.

In addition to color correction, the videographer can achieve quick, easy shadow and intensity control with diffusion, neutral density and reflective materials. Effects filters can also be used to create mood of a scene though color.

Of course, with the latest technology, many modern LED lights can now manipulate light electronically. For example, the new Neo 3 by Rotolight features RGBWW chips, which offers a myriad of possibilities to enhance creativity. Users can choose from an endless color palette including 2,500 filters from Lee Filters and Rosco Labs.

Rosco Labs even makes its own line of lighting gear with on-board color temperature and dimming controls, as well as hundreds of accessories to manipulate the light.

However, with standard light fixtures of any kind, there are common problems a videographer encounters on location. Knowing how to fix them — either with physical materials or electronic adjustment — is a key to being a good videographer.

Here are some tricky lighting scenarios: 1.) shooting a tungsten lit subject in the front of a bright picture window; 2.) shooting a speaker and slide presentation side-by-side in the same shot; or 3.) shooting inside a large factory with a mixture of exotic light sources.

Other situations include photographing a dark-skinned person with bright clothing against a light background; dealing with glare from shiny bald heads; or placing an interesting design and/or color on a blank wall. These are all problems that can easily be solved with light control materials.

Rosco Labs and Lee Filters, both major manufacturers of light control products, have been educating videographers for years on how to solve lighting problems. Here are a few solutions:

Problem: Shooting a tungsten lit subject in front of a bright window overlooking a city skyline.

Solution: Cover the window with an optically clear window correction material. The material comes in large rolls and can be taped directly to the window glass or framed. In normal form, the material corrects 5500K daylight to 3200K. It’s also available combined with neutral density filtration that can reduce the intensity of the light.

Problem: Covering a speaker at a podium and a slide projection screen side-by-side in the same shot.

Solution: Use the ellipsoidal or “Leko” spotlight (a focusing lens instrument with shutters). Two are needed – as key and fill – to illuminate the speaker.

These lights, which can be rented, are set up to project a precise beam with a sharply defined edge onto the speaker with no spillage over to the slide screen. Place layers of N3 neutral density material over the lights until the illumination level of the slide screen and speaker are comparable.

Then open the iris on the camera to compensate for the darkened scene. To reduce the edge of the hard circle of light left on the background wall behind the speaker, add some Roscolux Hamburg Frost to the front of the Leko key light. 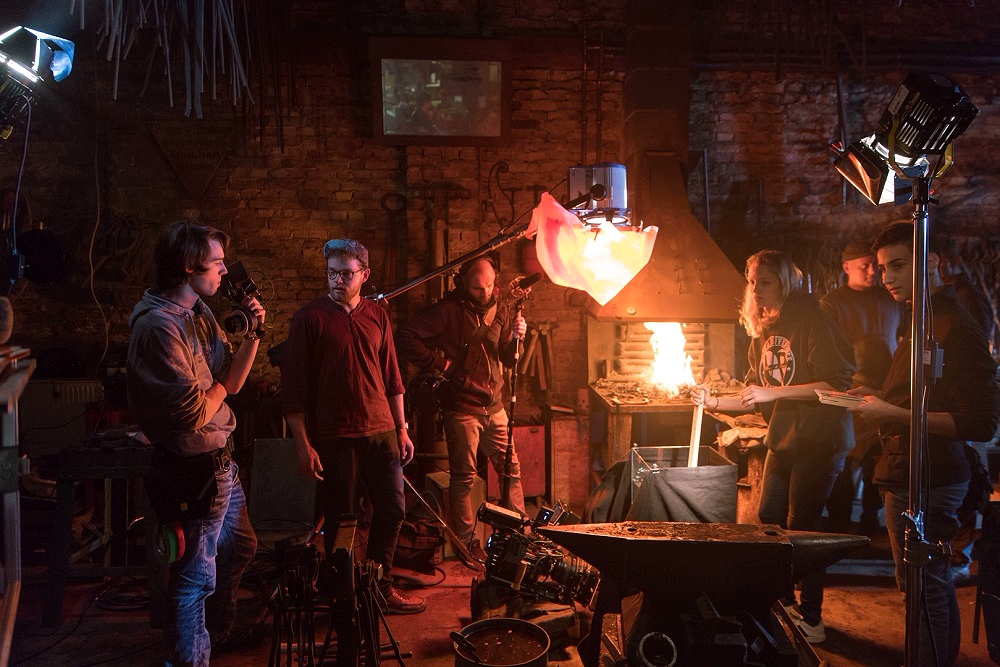 Problem: Shooting an interior scene in a large factory with a mixture of daylight and bluish metal halide lighting (may also be sodium or mercury lamps). How do we determine the correct filtration to place on the video lights to match the ambient light in the factory?

Solution: Set up the camera on a TV chip chart and white balance under the ambient metal halide lighting used to illuminate the factory work area.  Viewing the image on a waveform monitor, turn a video light onto the chart. (In this case we are using daylight temperature HMI lights).

Problem: Photographing a dark-skinned person with bright clothing against a light background.

Solution: First, deal with the clothing. Use neutral density material across the bottom portion of lighting instruments to block the amount of light hitting the bright clothing. This should reduce the brightness of the clothing but not the skin of the subject.

Decrease the harshness of the key light on the skin by adding diffusion material. To reduce light on the background, use a flag to block light from key and fill units. To bring out more of the skin tone of a dark-skinned person, place a light amber filter over one light. (Note: Be sure to white balance the camera before putting the light amber material on the light.  Otherwise, the effect will disappear.)

Problem: Eliminate the glare from a shiny bald head.

Solution: One possibility is to switch from a single backlight to two backlights placed off at 30 degree angles behind the subject. Each light should have diffusion material in the gel frame or over the barn doors.

Problem: An important interview subject must be taped in a hotel room or office with a plain, dull wall as a background.

Solution: Using color light control filters in front of your background lights, “paint” the wall with light. (Or adjust the color of a programmable LED light.) Times of day, mood and atmosphere can be established and a drab interview setting comes alive.

Rosco and Lee both offer a wide range of color correction and diffusion filters for this purpose. On top of the color, a pattern, shadow or design can be added. Again, using a Leko with pattern and half blue filtration material, the video shows how to create the shadow of venetian blinds against a blank wall.

To balance and correct, control shadows and deal with the intensity of light on location, light control materials are an invaluable tool. A basic selection of color correction and diffusion should be in every videographer’s survival kit.

One of the most enlightening weeks I spent in my video career was studying lighting with the great British cinematographer, Billy Williams, at the Maine Media Workshops in Rockport, Maine. Williams, who filmed On Golden Pond nearby, put us through a long week of solving a series of difficult lighting problems. We lit barns, churches, stores, houses and about anything else you can think of. This level of hands-on experience was invaluable to learning what light can and cannot do.

I’m sorry to say, but you can’t learn lighting from a book. The skills are best acquired hands-on by solving actual lighting problems. Experience is the proven key to success.