New York City – The Post New York Alliance, the Hollywood Professional Association (HPA), and Fuse Technical Group are hosting an event on January 26th to showcase virtual production technology for New York filmmakers in Fuse 42, a full LED Volume in Times Square. The presentation, led by Virtual Production Line Producers MESH, will focus on how virtual production assets and projects are built in Unreal Engine and how filmmakers can incorporate this technology into their projects.

Featuring the virtual production project “FATHEAD,” produced by the [email protected], with presentations by Executive Producer Ben Baker (MESH), Director c Craig Patterson, and Narwhal CEO Felix Jorge. The event will showcase the benefits of virtual production for projects of all budgets and will demonstrate different workflows and levels of asset creation. 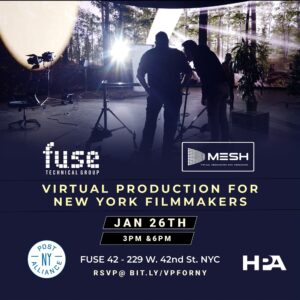 There will also be a Q&A session where attendees can ask questions and learn more about this exciting technology. Epic Games will be in attendance and will present on their education initiatives and next steps for filmmakers interested in this growing field.

This event is open to the New York filmmaking community and is an excellent opportunity to learn more about virtual production and how it can enhance their projects. The event will be held at Fuse 42, located at New 42 Studios, 229 W 42nd Street, New York, NY 10036, with two presentation times at 3pm and 6pm.

c. Craig is a filmmaker from New Orleans’ 7th Ward neighborhood. His work has received distinctions from The Blacklist, Sundance Screenwriters Lab, Sundance Episodic Lab, Hillman Grad’s Rising Voices, the Nicholl Fellowship, in addition to the Award in Screenwriting from Columbia University. His latest film, FATHEAD, shot on an LED Volume stage was made with the help of Warner Bros. Discovery, EPIC Games, Universal, Sony, and Amazon Studios as the recipient of the Innovation in Technology grant from USC. While there, c. Craig was also a recipient of the George Lucas Family Scholarship and the Edward Small Award for writing and directing at USC. c. Craig has also produced projects for Carnegie Hall and directed the critically acclaimed one-hour comedy special for Roy Wood Jr, Imperfect Messenger.

A vibrant creative with a genuine passion for creating story-driven, interactive content through real time workflows, Felix Jorge serves as the CEO, Head of Virtual Production, and Co-Founder of Narwhal Studios. His extensive career leading Visual Art Department teams has given him a deep understanding of the creative pipeline in all phases (Pre-Production, Production, and Post). Along with his experience on-and-off set, Felix’s dedication to innovation, enthusiasm for storytelling, and “Filmmaker First” mentality has helped shape Narwhal Studios into the revolutionary studio it is today.

At Epic Games Julie is building the talent pool of real-time artists that will redefine production techniques in the Games and Film industry. Julie has more than10 year’s experience in visualization with a background that combines global education systems, neuroaesthetics and content creation tools such as Unreal Engine, Metahumans, Twinmotion and Houdini. At Epic she sets the vision and global strategy for education, including secondary, post-secondary and upskilling industry professionals across M&E and Games.

Shelly Sabel is a NYC-based designer and creative director, proud to be a part of the team at Fuse.  Her 25-year design career spans art, fashion, theater, dance, live events, immersive experiences, and virtual production. Favorite projects involve storytelling through content and experiences that showcase emergent technologies as well as then getting those technologies into the hands of a broader spectrum of artists. As a creative producer, she communicates clients’ visions with technology teams to create strong communities and push the boundaries of what can be accomplished. Shelly holds an MFA from NYU’s Tisch School of the Arts, where she is an adjunct faculty member.