Vizrt sprung out of nowhere 23 years ago to grow into a video powerhouse whose products today are watched by three billion viewers in more than 100 countries around the world.

Short for Visualization in Real-Time (Vizrt), a Norwegian company, creates production, management and distribution tools for the digital media industry. Its products include applications that create real-time 3-D graphics and maps, visualized sports analysis, media asset management, and other video tools for the internet and broadcast industries.

Vizrt began on a modest scale, cobbling together a series of acquisitions. It all began when TV 2 Norway needed a system for creating graphics in its newsroom. In 1997, a spinoff company, Pilot Broadcast Systems, was established to create an early template-based graphics system.

Since its creation, Vizrt has grown at extraordinary speed. In 2005, it acquired London-based Curious Software, developers of 2-D and 3-D animated maps for television, corporate presentations and online applications. In the same year, the company acquired 19 percent of Adactus, a Norwegian company. Together, the two companies developed Viz 3G, a graphics engine for mobile telephones and other mobile devices.

The string of acquisitions continued. In 2019, Vizrt acquired all shares of NewTek for more than $95 million, and, in 2022, Flowics, a provider of cloud-based graphics.

The Flowics platform gives Vizrt customers control over the creation, integration and playout of HTML5 graphics without having to write code. These graphics can use external data sources, including sports statistics, timing and scoring, betting, weather and finance information.

Frank Beacham: Michael, we are now a couple of years into the NewTek merger with Vizrt. How is it working out?

Michael Hallén: The NewTek acquisition is working out way above expectations. I have the proof of the pudding, because I can look at the numbers. We integrated the company very quickly after the acquisition. Based on the product lines that we acquired, NewTek’s original business has basically doubled since then. I think that’s a pretty successful track record.

Frank Beacham: In acquiring NewTek and Flowics, Vizrt is clearly betting on the future of internet video. How big is that market in your total business and where do you see it going?

Michael Hallén: Today, everybody is on the internet. It is not just the streamers or the houses of worship — it’s everyone, including the major broadcasters. We used to talk about it only being the small guys, but now it has all blurred. That means for us that we want to supply all content producers and video storytellers with the tools that makes it possible to reach viewers — whether through Facebook Live or CNN. We want to cover it all.

Frank Beacham: I hear your corporate goal is to supply video tools to everyone from the kid in the classroom who wants to tell a video story all the way up to tier-one broadcasters. That’s a very wide group. Is that the reason for all the acquisitions — to expand your products to cover all video markets?

Michael Hallén: To some extent — because we view video production and video consumption growing exponentially. I know that can’t go on forever, but right now it’s growing exponentially. We see that growth not only happening in the high-end, but also with the small producers and even prosumers. We have made it our task to supply any storyteller regardless of size with the right tools.

That’s where the NewTek acquisition fits in, because it gave us a range of products that that was more targeted to non-broadcast clients, such as newspapers, high schools, universities, houses of worship…that kind of customer.

Frank Beacham: A question about NDI, or the Network Device Interface. NDI is a royalty-free software specification developed by NewTek. It enables video-compatible products to communicate, deliver and receive HD, low latency video over a computer network that is frame accurate and suitable for switching in a live production. What is the status of NDI?

Michael Hallén: NDI is an amazing thing for us. It has become the glue that keeps many of our products together. Not only the NewTek product portfolio, but it has become the de facto standard for video transmission in the industry. It’s a core piece of technology and has been extremely successful since the acquisition.

We have built a separate organization around NDI because it’s a slightly different beast and we have focused on adoption around the world. It is growing very, very fast. It is now being used by prosumers, the pro audio-visual guys as well as the high-end. More and more, people are signing up and supporting NDI. It’s growing into the de facto standard for video transmission. 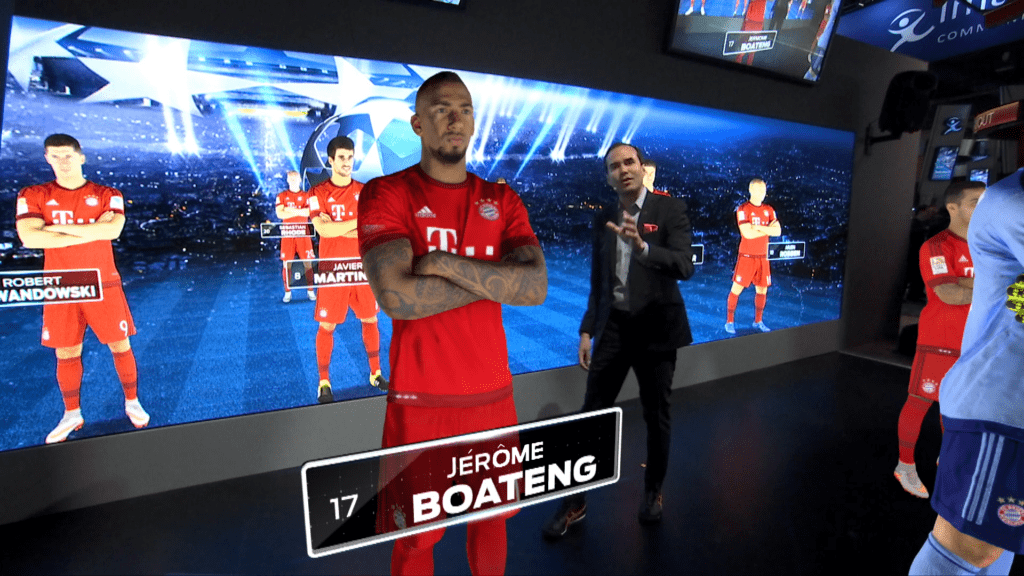 Frank Beacham: Today, Vizrt has three billion people watching video stories using your technology. That is a mind-blowing number! Where does the company rank in terms of the global market?

Michael Hallén: We have a large market share with all the really large media companies around the globe. They reach an audience of that magnitude watching content that has been crafted using our tools, particularly the graphic tools. I agree with you it is a pretty amazing number. But that’s how it is.

Frank Beacham: Where do you see Vizrt in five years?

Our latest Flowics acquisition is designed do that. It will help solve problems for many video producers.

We are always on the lookout for cool technology that can complement this goal. So, if we fast forward here — we will continue to do exactly what are doing. We will probably continue to do acquisitions that accelerate our portfolio over the next five years.