Novi, MI, April 8, 2021 – Deeply committed to the Washington, D.C. metro area, NPR member station WAMU (88.5 FM) connects Washingtonians with each other and the world through programming that reflects the unique environment of its region. Striving to reach a segment of the community historically unable to enjoy radio programming, the innovative public broadcaster deployed the enCaption4 captioning system from ENCO to provide live, automated transcripts of its on-air audio to deaf and hard-of-hearing audience members through its website. 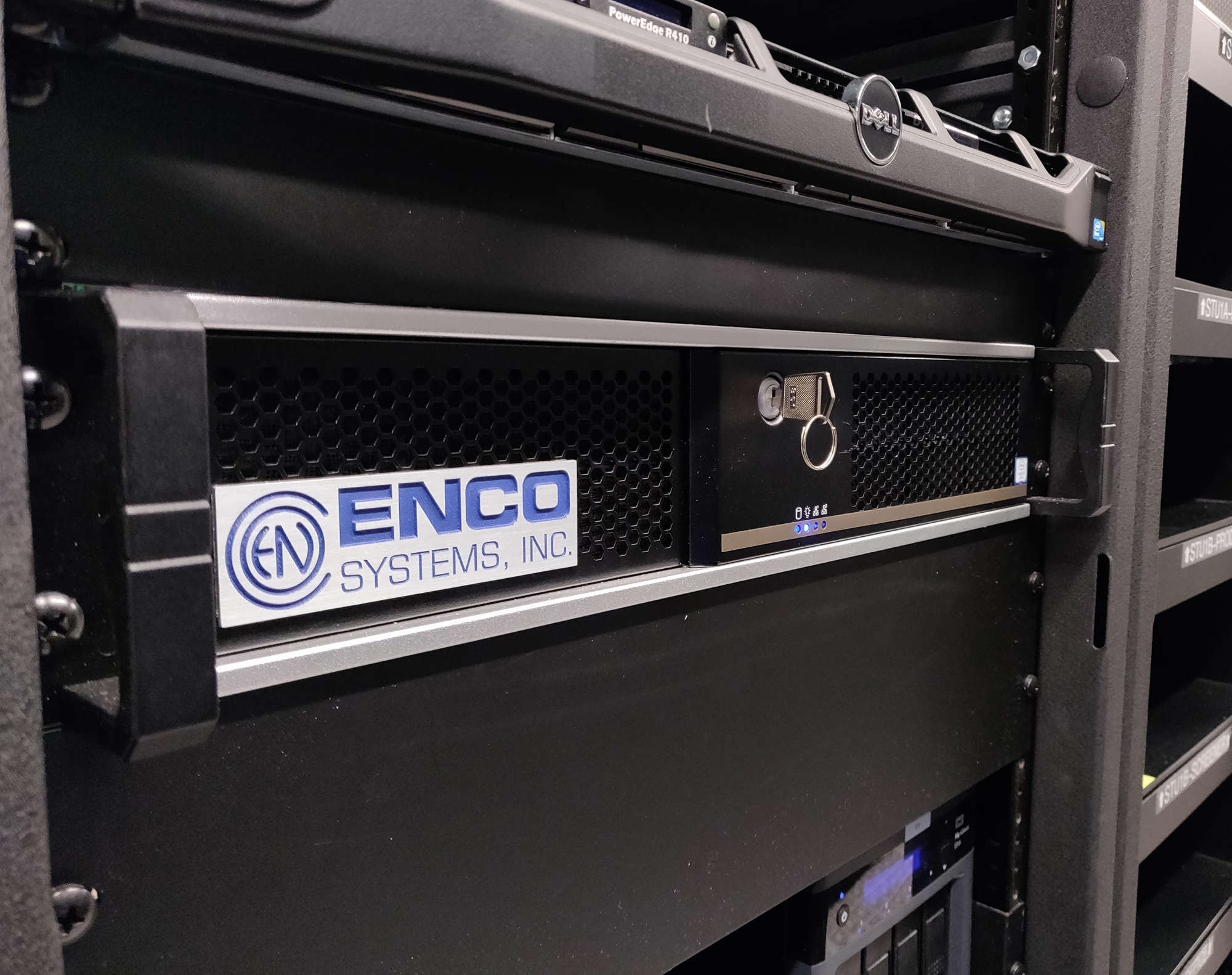 The Washington area is home to a substantial population of deaf and hard-of-hearing individuals, including approximately 1500 students at Gallaudet University. The inspiration for WAMU’s captioning project came when a deaf political candidate seeking office in Washington requested to appear on the station’s popular Kojo Nnamdi Show and wanted the result to be accessible to all of his constituents. “At that moment, it stood out to us that we hadn’t been serving that important part of the population before and that there was demand for bringing our content to this audience,” said Rob Bertrand, senior director of technology at WAMU.

WAMU used a service provider with live human transcription and live sign language interpretation for that particular broadcast, butrecognized that a different approach would be needed to serve this community on an ongoing basis. “The timing of the content can be unpredictable, which means we can’t schedule a transcriptionist or sign language interpreter,” explained Bertrand. “We realized there was now technology that would allow us to automate the process. Automated closed captioning has existed for television for some time. What if we could take the equipment used to generate captions for TV, and instead use it for radio to bring captions to our website?”

As WAMU researched the automated captioning solutions being used by TV broadcasters, ENCO’s enCaption4 stood out. “enCaption4 had a great reputation, with lots of positive feedback from broadcasters using it for television,” said Bertrand. “We did a demo of enCaption4, and our web development team came up with a way to present the captions it creates on our website.”

Audio from WAMU’s Telos Alliance Axia audio-over-IP backbone is converted by an Axia xNode to an AES/EBU signal that serves as the input to enCaption4. enCaption4 ingests the same on-air signal path being routed to WAMU’s transmitter and online streaming encoders, enabling live, 24/7 captioning of all of WAMU’s on-air content. The captions created by enCaption4 are then fed to the station’s website, where they are displayed in a dedicated transcription page.

In addition to praising the reliability of enCaption4, Bertrand highlights the accuracy of its captions as best-in-class for live applications. “Live captioning in real time can’t be as perfect as processing recorded audio after the fact, but enCaption4 really is quite accurate,” said Bertrand. “ENCO is a leader is live captioning and is doing this better in real time in a fully automated way than any other solution we have come across.”

Beyond the advantages of the enCaption4 product, Bertrand is also very satisfied with ENCO’s support of WAMU’s goals. “We’re doing this to improve our service to the public, and innovating as we go along,” he explained. “That also involves other changes to our station’s internal technology stack, and we’re very much building the track as we bring the train forward. ENCO has been a terrific partner for this initiative, and I have been really happy to work with them.” 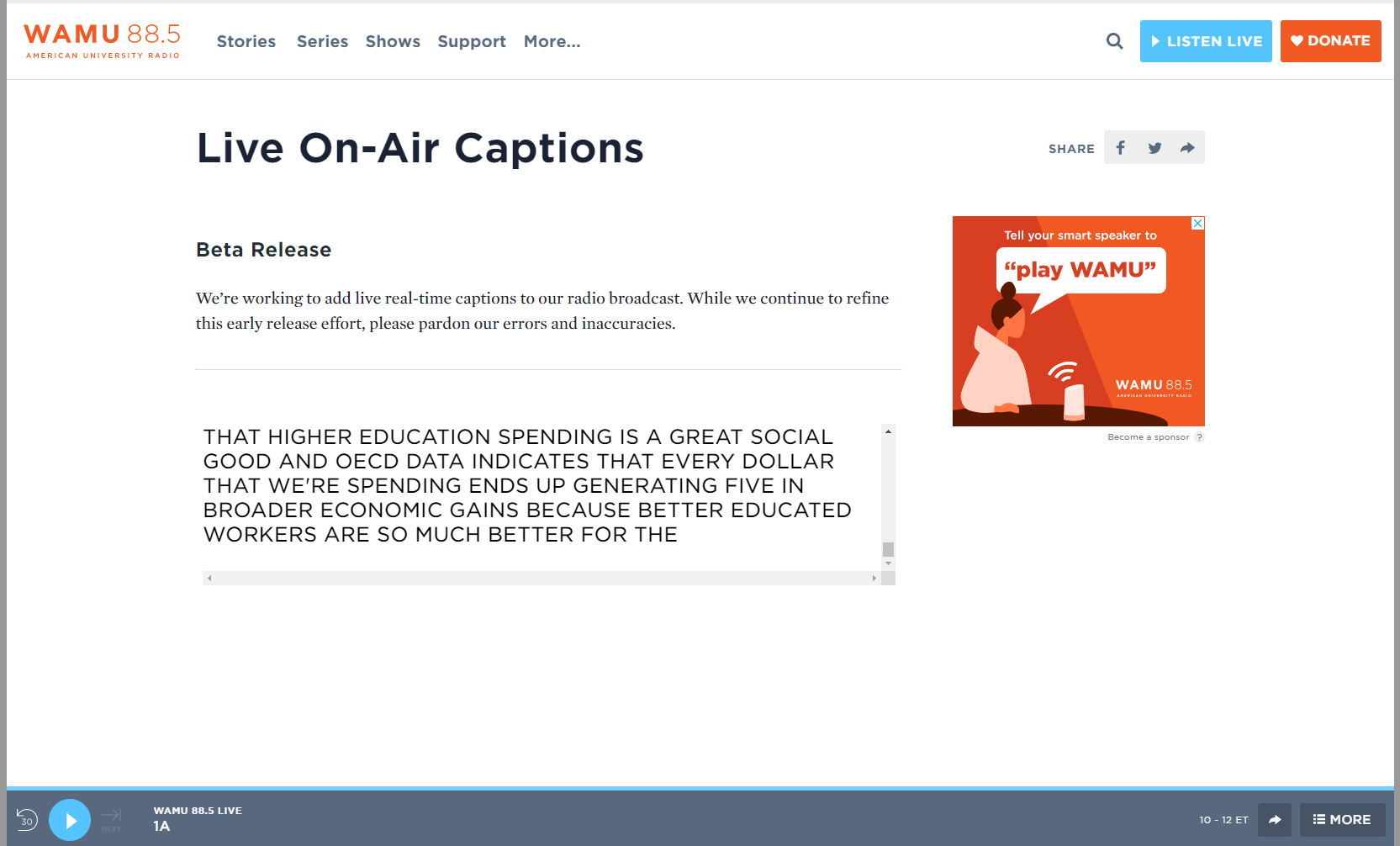 WAMU’s pilot project generated a relatively small but loyal following, with roughly 150 people routinely watching the station’s captions for around 30 minutes per day – numbers that are sure to grow once WAMU begins actively promoting their availability to the general public. “Our results already show deep engagement, and that this service is meaningful to a segment of our region’s population that was not previously being served by our content,” said Bertrand.

WAMU plans to upgrade its content management system to allow integration of its internal data sources with enCaption4, thus providing a dictionary that will further increase the accuracy of WAMU’s captions with the spellings of challenging local names and events. The station also ultimately intends to integrate the captions directly into its core streaming player. However, even before these enhancements, the broadcaster considers its radio captioning initiative a success.

“We believe that the content we produce has meaning and power for the public of the greater Washington area, and we are proud that we can now reach this important segment of the population that radio, as an audio medium, has been historically unable to reach,” saidBertrand. “Our mission is to inform and enrich every possible member of the community, and ENCO is helping us achieve that mission a way that was not possible before.”