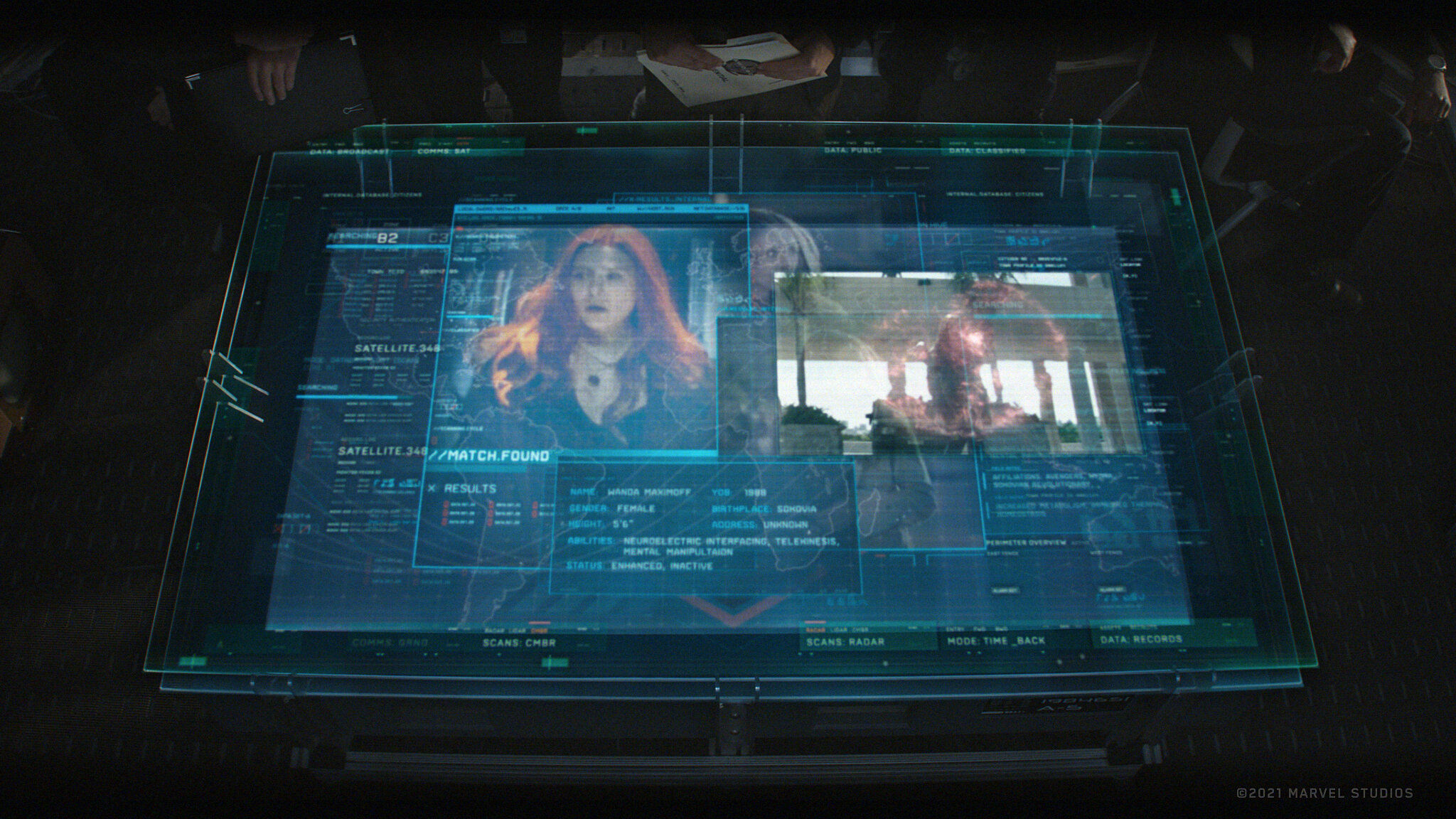 Friedrichsdorf, Germany – September 28, 2021 – Maxon announced today that Cinema 4D was used to support the creation of several fantasy user interfaces (FUI) on the hit Disney+ series, WandaVision, a part of the Marvel Cinematic Universe (MCU). 3D motion design artist Robyn Haddow was tasked with bringing the fantasy technology to life for viewers watching the series at home. A FUI expert with a superhero resume, Haddow’s portfolio includes television series such as The Flash, Arrow and Legends of Tomorrow, as well as feature films including The Suicide Squad, Black Widow, Ant-Man and the Wasp, Guardians of the Galaxy Vol. 2, Spider-Man Homecoming and many more.

For WandaVision, Haddow worked with Los Angeles design and visual effects studio Cantina Creative for the concept and execution of several plot-critical pieces of fantasy technology: specifically, technology used by the ominous organization S.W.O.R.D. (Sentient World Observation and Response Department). Chronologically taking place after the havoc and tragedy that occurred during Avengers: Endgame, the tech seen in WandaVision needed to reflect the cinematic universe’s rebirth. This meant looking to past MCU films to draw inspiration for this next phase, as well as to maintain continuity by including elements relevant to the fictional world.

When it came to developing the technology seen in the S.W.O.R.D. headquarters, Haddow wanted to make sure it showed off the unique combination of human and alien technology that was available to the characters. Haddow explains, “The tech was all based on a mashup of Kree (alien), Skrull (alien), and human militaristic-style graphics. Under the creative direction of Stephen Lawes, Co-Owner at Cantina Creative, part of the design was to draw influence within the context of the whole Marvel Cinematic Universe to include callbacks to different technologies seen in other Marvel works without being overly intrusive or irrelevant.”

The technology used in the S.W.O.R.D. headquarters included a multitude of interfaces, the centerpiece of which was the multi-purpose light table the organization used to visualize data pulled from the town of Westview. “The main technological challenge was this three-layered glass table that during the concept phase, had a hologram on the top that was the centerpiece of the S.W.O.R.D. command center,” Haddow says. “Glass has such unique properties and we were working with three stacked layers, we had to be sure that our design would clearly give prominence to key data points that were important to the plot while displaying other, less plot-critical information simultaneously.” 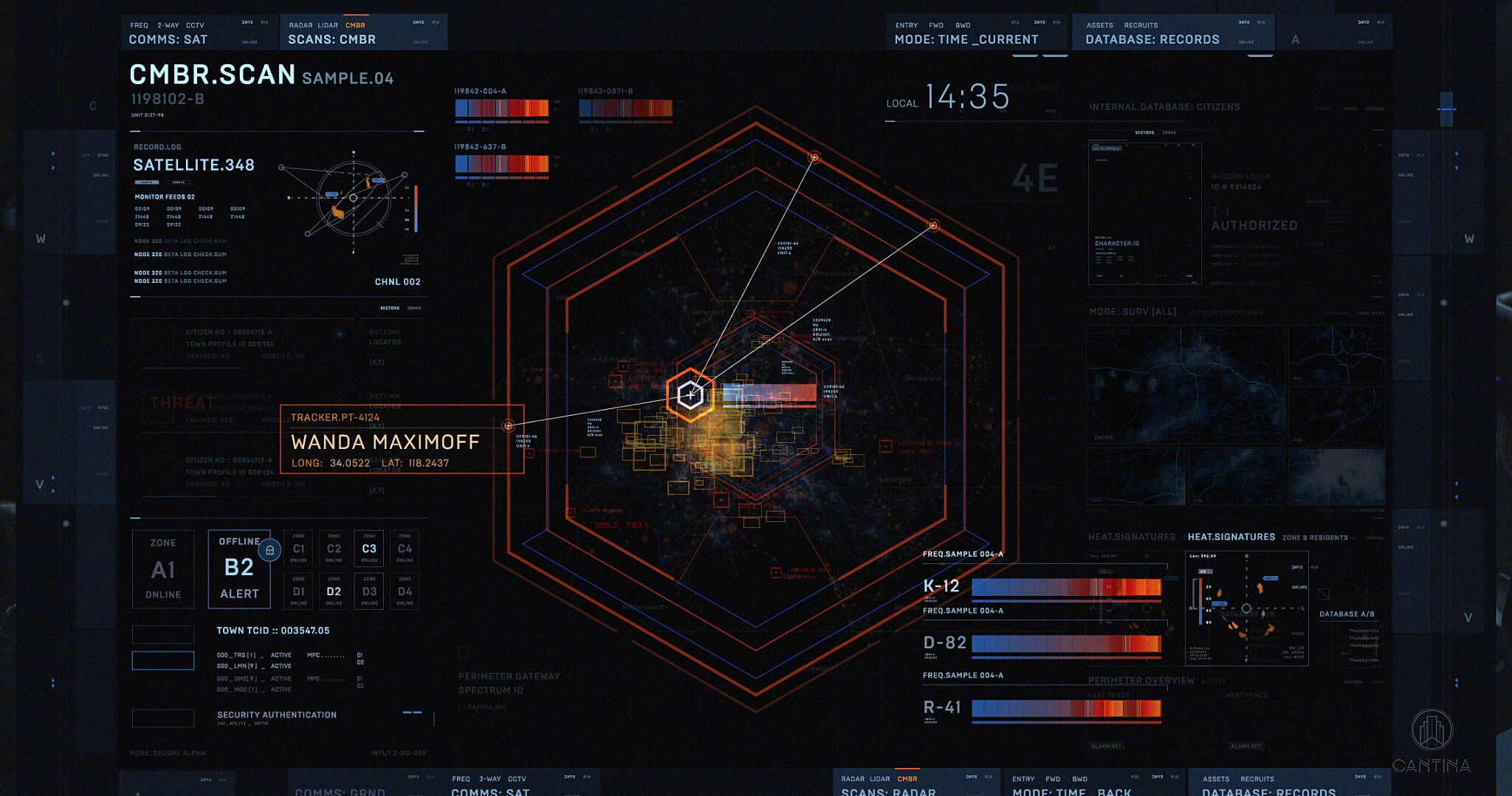 With Cinema 4D, Haddow was able to craft a visual that illustrates complex fantasy tech, built in a production-ready manner as well as being flexible for art direction optioning along the way. “The shape of Westview is a hexagon as it’s displayed on the table so I used the tiles inside of the procedural noise system to create hexagonal textures and then layered them at different scales to create a sense of depth and complexity. Getting creative with shader layer masks allowed me to pull important details and give them emphasis based on the plot for viewers.”

Haddow concludes, “What’s great about Cinema 4D is that it’s easy to hash out ideas quickly to figure out what works and doesn’t work in a given scenario. Additionally, the ease with which it speaks to After Effects is hugely beneficial; I was able to easily pull specific 3D null data to place 2D and 3D assets directly on the timeline, which is important when calling out tracking beacons and location markers. The result is a host of dynamic assets that tie back to the whole Marvel Cinematic Universe.”