Wes Dooley: An Audio Pioneer with a Strong Connection to History

About to turn 80 later this year, Wes Dooley is a Pasadena, California-based audio pioneer with strong connections to the earliest days of audio history in the United States. The founder of AEA (for Audio Engineering Associates), Dooley’s mentor was Wally Heider, a 1960s-era master of remote recording who made classic tapes of performances by Jefferson Airplane, Crosby, Stills, Nash & Young, Van Morrison, the Grateful Dead, Creedence Clearwater Revival and Santana.

After hours, the young Dooley borrowed an Ampex 350 tape recorder from a radio station where he worked and began making live recording on his own — taping at such iconic music clubs as the Troubadour, the Ice House and Ash Grove in Los Angeles. He recorded acts like the Clancy Brothers and Tommy Makem, Lightning Hopkins and Sonny Terry and Brownie McGhee.

Dooley had a natural affinity for audio engineering, and often built the needed equipment to record those remote sessions. He was weaned on early ribbon mics, and considered them the gold standard after their invention by Telefunken in Germany in the early 1920s.

In the U.S., RCA made classic ribbon mics beginning in the 1930s. RCA’s mic line was led by the iconic 44B, one of the most versatile musical mics ever made. The 44 was a favorite of Heider and Wes’s friend, guitarist and inventor Les Paul. The RCA 44B mic is still used today in studios throughout the world.

In 1976, RCA got out of the microphone business. After the closure, Dooley visited with Jon Sank, RCA’s former chief microphone engineer, who taught him how to install and tension ribbons in RCA mics. Sank also gave Dooley a large stack of new-old-stock ribbon material and a ribbon corrugator that’s still in use today at AEA.

AEA began servicing RCA mics and later replicating missing parts. After 20 years — in 1998 — when Dooley had duplicated every part of the 44B, he began to manufacture a replica of the mic. It was called the AEA R44 series. Since that time, AEA has been a dominant player in the high-end ribbon mic market.

Frank Beacham: Wes, you are a major living link to a lot of golden age audio technology and the people who made it all happen. What was the most important thing you learned from Wally Heider, the great remote recordist?

Wes Dooley: Heider was not a ‘fix it in post’ kind of guy. He knew what a big band sounded like and he knew the sound he wanted to get. He physically moved the microphones around for best placement, as opposed to using electronics to fix things later. I discovered different microphones had different characteristic, depending on whether music is loud or soft.

Wally taught me that the job of a really good engineer is to find a good room for the people to make music in, put mics in the right place and get out of the way. He felt the vitality of live performances is really significant in a recording. Musicians listening to each other and interacting with the audience is significant. The quality of live music is a major influence in how we design and build our microphones today.

Frank Beacham: Was it the closure of RCA’s microphone business that drew you to repairing, selling and designing ribbon microphones?

Wes Dooley: Yes, I took drafting classes, and I took my calipers, and I measured every part in those RCA ribbon mics. In the time around 1997, I’d fax my drawings back and forth with Sank. Out of that work, came the AEA R44 series of mics.

Frank Beacham: A ribbon mic is basically a strip of thin corrugated aluminum suspended between two magnets and hooked to a transformer. Of course, that sounds simple, but I know it’s not. In layman’s terms, what’s the difference in sound between a ribbon and a condenser microphone? 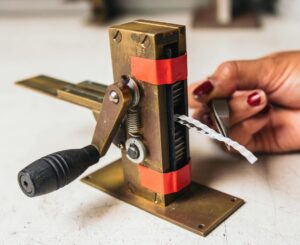 All our ribbons are made of 2.35 by 0.185-inch two-micron pure aluminum. You need a conductive material that is very light and can move easily.

Over the years, we added some things like using neodymium magnets, because there are real advantages for the performance with those. And we also started tuning the mics lower, just to see how it sounded. We finally got it down to 16.5 Hz, the same as RCA used. It sounded really good. And the ribbon lasted a long time. Each of our mics has a distinctive nuance, but this tuning is essential to producing the sound.

The bottom line is we try to make microphones that aren’t colored. We want them to sound the way people hear the music. Les Paul once told me that the 44 was a mic that nothing sounded bad on. It just always sounded like what you heard on everything.

Frank Beacham: This is a question a lot of people ask about ribbon mics. There are now many different models from a growing number of companies at a wide range of price points. Some of the low-cost models are made in China, while your mics are designed and built in the U.S. What is the difference in the cost? What should one should look for in making a decision about which ribbon model to buy?

Wes Dooley: The answer is simple. Just listen to the mic and see if you like the way it sounds in a particular application. There’s no magic to it. What’s most important is have great musicians playing in a good sounding room.

Wes Dooley: Passive ribbons need a high amount of gain and impedance matching. Preamps also allow one to do a ton of really fun stuff to make things sound different. As I use better preamps, it sounds more like what I hear when placing the microphone in the room with great musicians.

Frank Beacham: There has been a long-held belief that ribbon mics are too delicate for rugged use. Is this true?

Wes Dooley: For years, ribbon mics have been used on the road by touring musicians. They rarely fail. Tim McGraw and Faith Hill used our R44 for concerts on the road and technicians kept accidently pulling the eight-pound R44 mic off its stand and it hit the floor repeatedly. Outside of a bent exterior cage, the mic always sounded great. There are a few basic rules for care of ribbons, as with any mic. But ribbons are as rugged as other high-end microphones. That’s been proven by dozens of road warriors.

Frank Beacham: Ribbon mics made their comeback in the age of digital technology after losing popularity in the analog era. Why the rebound of ribbons in the digital era?

Wes Dooley: Ribbon mics have an inherent, high-frequency roll-off. Until the late 1950s, condenser mics could not compare with a ribbon’s frequency response. But as condensers improved, they sounded better on analog recordings because their top-end was exaggerated and hyped. By the time a condenser mic was recorded to tape, transferred to vinyl and then played back on radio, the top end was greatly rolled off. It sounded very smooth.

But in the 1990s, digital recorders began to replace analog tape machines. With digital, engineers found that condenser mics sounded too harsh and brash when going directly to digital converters. They discovered that digital audio sounded better when recorded with the natural roll-off of ribbon mics. Ribbons were warmer, more mellow and pleasing to the ear. It was this shift in the recording method that brought ribbon mics back. They have grown in popularity ever since.

Frank Beacham: What’s the future for ribbon microphones? What do you want to accomplish next?

Wes Dooley: Our microphones are designed for music and dialogue applications. Our latest mics are getting smaller and that’s the direction we will continue to go. We’re big fans of continuous improvement. Most of us learn new stuff as we grow older. And we’d like to be able to share that with others. That’s what we’re doing now with our preamps. We had some things that we could do that made them a little bit smoother. So we steadily continue to advance the art. It never stops.