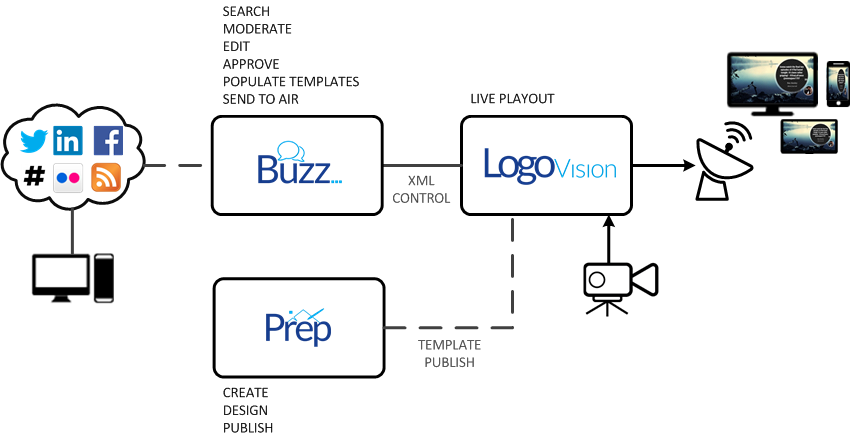 There is no doubt that social media drives engagement with television production. Audiences want to comment, to contribute, to get involved. Buzz, a new product from Pixel Power, makes this happen – simply, effectively and safely.

The challenge for producers wanting to harness the power of social media is that they have to identify the tweets or posts which refer to the show, sort out which are suitable for broadcasting, then format them for the graphics engine to put on screen.

Buzz does all of this, quickly and easily. The software not only looks for relevant comments, it prioritises them according to rules set by the production. For a reality show, for instance, it could put messages from former contestants, or celebrity tweets, into a priority list to help the producers give the show a real buzz. Equally, inappropriate language and other unsuitable comments can be deleted before they even reach the short list.

A member of the production team simply checks the messages to be shown from the prioritised shortlist. Buzz directly controls to one of Pixel Power’s graphics devices, so as soon as the tweet is ticked it can be on air, in the graphics format of the show.

“Every sort of programme is surrounded by social media today,” said James Gilbert, CEO of Pixel Power. “It is not just popular entertainment and reality television: viewers comment through social media on everything from political debates to sport.

“Our customers asked us to take away the complexity of putting social media on air,” he continued. “The sorting and preparation is fully automated, so all the operator has to do is to tick selected tweets from a shortlist. It is simple to drive, but provides real security so it is hard to put inappropriate comments on air.”

See how Buzz makes light of the link between broadcasting and social media on the Pixel Power stand at IBC 2014, 7.A31.