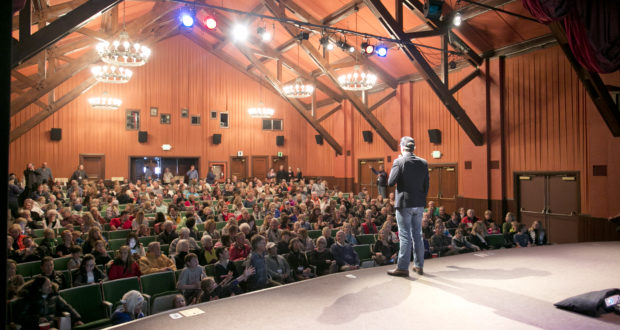 A three hour drive from Boise, Sun Valley is the home of a world-class ski resort and an up and coming film festival which promotes local talent and hosts internationally known stars of the screen such as Clint Eastwood, Bruce Dern, and Jodie Foster.

Now in its sixth year, the Sun Valley Film Festival is open to filmmakers and moviegoers alike. “Accessibility was an important goal for us from the onset, and is even more important as we continue to grow,” notes Laura Mehlhaff, Director of Programming of the SVFF.

Boise native Mehlhaff has worked in film in Los Angeles, New York City, Baltimore and Albuquerque, and is enthusiastic about growing the film industry in Idaho. She encourages Idaho screenwriters and filmmakers to enter the One Potato short screenplay competition, which was developed to support emerging filmmakers and incentivize filmmaking in Idaho. The winner of the screenplay competition will receive $5,000 to bring a script to life by filming on location in Idaho. The winning script of 15 pages or less must be filmed in Idaho.

There are numerous other contests including the High Scribe Award, which is for feature length screenplays; the short film lab for writers of short screenplays of 10 pages or less; and the Future Filmmakers Forum for young filmmakers in grades 7 through 12.

The Sun Valley Film Festival has something for everyone. “We celebrate varied aspects of film culture, and showcase films from hard-to-find indie gems to arthouse theater stalwarts,” shares Mehlhaff. “Between the films, panels, guest speakers, parties and other events, people of all interests tend to find something that resonates. While there are all-inclusive passes for those who want to participate in everything, we have plenty on the docket that is either free or sold on an individual ticket basis.”

“A great example of our commitment to accessibility is our Coffee Talks series. Coffee Talks is often hailed as the ‘crown jewel’ of our festival; it’s a chance to hear from some dynamos in the world of film regarding their experiences and what they’ve learned along the way, as well as an interactive Q&A session. Past coffee talks have featured Academy Award winning screenwriter David Seidler (The King’s Speech), Oliver Stone, and Kevin Smith. The Coffee Talks are always free and open to the public. It is important to us that filmmakers and film lovers are able to participate in our festival.”

In 2011, Mehlhaff. was introduced to screenwriter Teddy Grennan, producer of Coming Through the Rye and Among Ravens, by Heather Rae (a former Idaho-based producer). “Teddy was interested in starting a film festival in Sun Valley, which I thought was neat, but didn’t give it much thought,” states Mehlhaff. “Flash forward to a few weeks before the first festival, and Heather recommended Teddy contact me when he told her he was looking for additional staff for the fest. After helping launch the first installment, Teddy asked me to come on board as the Director of Programming, which has been my role ever since.”

Mehlhaff had been involved behind the scenes peripherally at the Boise-based True West Cinema Festival that ran for a number of years. As a filmmaker, Mehlhaff attended marquee festivals (Sundance, Tribeca, Toronto) and often was the point person for materials/information that was needed by the festival in order to properly showcase the films she worked on. “I came to SVFF with a solid base knowledge of what would be required and what questions to ask. My experience as a filmmaker made me fall in love with the film culture that festivals celebrate.”

When asked what she likes most about Boise, Mehlhaff answered, “Public support of art and creative endeavors of all kinds. Boise is primed for things new and exciting. And while there have always been amazingly creative and bold movements in Boise, it seems that the public is ready, now more than ever, to show up and help keep things in momentum.”

What advice do you have for filmmakers?

Be adaptable. Someone once told me that all filmmakers should know what both their ‘dream job’ in film would be, and what their ‘day job’ in film could be. To work on both and give yourself options. For example, if you want to be a director, find out what ‘in demand’ job will help get you the experience and connections you need. Be willing to work your way up. With so much access to decent equipment and other elements necessary to make a film, a lot of people are prone to just jump to whatever their dream position in film is, without doing the work to make sure they really have a foundation and know what they should to be successful. Be prepared to learn from mistakes and handle failure One of the best ways to know one’s strengths and weaknesses as a filmmaker is to go out and make films.