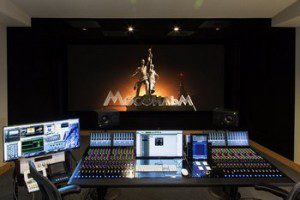 Working in conjunction with Moscow-based Systems Integrator Sfera-Video, White Mark transformed a space within the complex into a new room equipped with Russia’s first Pro Tools | S6 control surface, which is ideal for mixing television programmes in mono, stereo, 5.1 and 7.1 surround sound. The suite is also being used to premix feature films.

The undisputed leader of the Russian film industry, Mosfilm produces almost all of the country’s motion pictures as well as a vast array of television programmes and videos. The facility has production and post production capabilities for sound and picture and offers a complete service from script to final release.

Dmitry Patrakov Audio Engineer at Sfera-Video, says: “We asked White Mark to cooperate with us on this project because the company has a very good reputation for designing audio facilities. We needed a partner with their high level of acoustic experience because our customer’s requirements were unusual. They wanted to achieve the most realistic sound within the limited area that was available for this studio, and they wanted that sound to be comparable with studios that are much bigger. White Mark successfully achieved this and the room is now the most popular small-sized studio in the Mosfilm complex.”

David Bell, Director of White Mark, adds: “We were very pleased to get this commission from Russia’s leading film facility and delighted that our work there has been so well received by Mosfilm’s staff and clients. This project continues White Mark’s long tradition of working in Russia, in particular in Moscow where we have now delivered a number of prestigious audio facilities.”

About White Mark:
Established in 1997 by David Bell, John Dunnill, Derek Buckingham and Alan Cundell, White Mark Ltd specialises in production facilities for music recording and the film and television industries. Over the last fifteen years it has designed and supervised the construction of over 500 production suites worldwide. The company’s impressive client list encompasses some of the world’s most famous music recording facilities including Peter Gabriel’s Real World Studios in the UK, Germano Studios in New York, Hit Factory/Criteria Recording Studios in Miami, Strongroom in London and private studios for producers and musicians such as William Orbit and Damon Albarn. In the area of audio post production, White Mark has completed over 140 audio studios and many broadcast and video editing facilities for more than 60 companies in Soho alone. The list of clients includes Grand Central, Hackenbacker, Envy, De Lane Lea, Scramble, Lipsync, Molinare, DeLuxe, 750mph, NBC/Universal, Wave, Unit and Boom. Advertising agency clients include worldwide facilities for Hogarth International and AMV/BBDO on four continents. www.whitemark.com