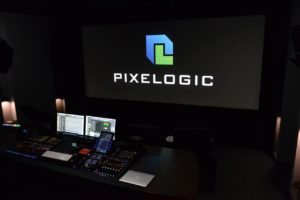 Acoustic consultancy White Mark Ltd has helped Pixelogic transform a former office building in London’s West End into a state of the art facility for content localisation and distribution.

Working closely with Laurence Claydon, Pixelogic’s technical consultant and programme manager, White Mark has designed and installed five Dolby Atmos approved sound mixing and screening theatres, each of which supports a variety of immersive audio formats and is equipped with the latest laser projector technology for 4K and HDR.

Pixelogic’s London premises underwent an intense period of redevelopment to create the new facilities. This entailed completely reconfiguring the interior space to make room for the theatres (three large and two small), plus two recording booths for ADR work. There is also room for a sixth theatre, which will open later this year.

White Mark was awarded this project on the back of its long experience in designing audio facilities for music, film and TV post production clients. Since its formation in 1997 it has designed and supervised the construction of over 600 production suites for numerous clients worldwide, including over 50 companies in London’s Soho.

David Bell, managing director of White Mark, says: “This project saw White Mark devising layouts within a challengingly shaped building that would allow the required number of technical spaces to be developed, meeting the high standards of performance that are expected both by our clients and by the Atmos specification. Our increasing experience with the general architecture of large developments, together with our long history of working with Laurence, helped us to incorporate the necessary rooms into a facility that flows well throughout the building. We are particularly happy with the performance of the finished suites, with acoustic responses that translate superbly to the outside world whilst supporting accurate mixing and editing.”

As Pixelogic wanted its new theatres to look and feel as individual as possible, White Mark worked closely with interior designer Nichola McCann, of Cann Creatives, whose clever use of colour, discreet lighting and plush seating has given each theatre a highly distinctive feel. The three larger theatres are equipped with Avid Pro Tools systems and JBL monitoring (32, 30 and 28 channels respectively) and all five theatres are networked using the latest Dante technology so that work can be easily moved from one room to another.

Pixelogic Vice President Andy Scade noted, “We work with content that is of the highest value to our customers, who trust us with these important assets. It was crucial for us to ensure that every Pixelogic facility – here, California, Egypt – surpasses their needs. We were delighted to find a collaborator that would bring top tier design and acoustic excellence to our London facility.”

Established in 1997 by David Bell, John Dunnill, Derek Buckingham and Alan Cundell, White Mark Ltd specialises in production facilities for music recording and the film and television industries. Over the last twenty one years it has designed and supervised the construction of over 600 production suites worldwide. The company’s impressive client list encompasses some of the world’s most famous music recording facilities including Peter Gabriel’s Real World Studios in the UK, Germano Studios in New York, Hit Factory/Criteria Recording Studios in Miami, Strongroom in London and private studios for producers and musicians such as William Orbit and Damon Albarn. Most recently, The Sanctuary complex at the Albany Resort in Nassau, the Bahamas has been opened to wide acclaim. In the area of audio post production, White Mark has completed over 180 audio studios and many broadcast and video editing facilities for more than 50 companies in Soho alone. The list of clients includes Grand Central, Hackenbacker, Envy, De Lane Lea, Scramble, Lipsync, Molinare, DeLuxe, 750mph, NBC/Universal, Wave, Unit, Soho Square and Boom. Advertising agency clients include worldwide facilities for Hogarth International and AMV/BBDO on four continents.
www.whitemark.com