Most YouTube creators want as many viewers as possible. That newly uploaded video is just waiting to be discovered by the horde of fans that will elevate the channel to success. Most of these creators will also quickly learn that this does not happen overnight. If only they could get that initial boost, then surely that video will go viral!

The disappointment is real, and discouraged creators may be tantalized to throw a few dollars at services that boost views, not realizing they may be setting themselves up for irreparable harm to their channel. 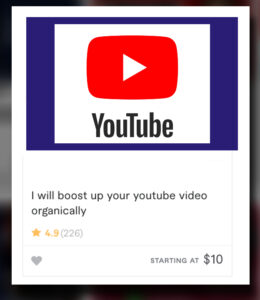 There are plenty of freelancers that offer “view boosting” services. Vendors, such as Fiverr, have listings for $20 or even lower. There are advantages to increased traffic and it’s easy to see why these services can be seductive.

The opportunity to focus on content and let someone else do the heavy lifting to generate traffic seems like a smart delegation. Cultivating an audience requires sweat equity so an online listing offering 20,000 views for just $20 can be incredibly enticing.

Popularity may also pull on viewer behavior. Someone searching for investment advice may come across two videos with the same topic. If one has 200 views and the second has 40,000, they may gravitate towards the more popular video. It must be trustworthy if more people are watching right?

The temptation may also be financial. The requirements to qualify for YouTube Partnership and ad revenue sharing are fairly easy to meet so many channels are monetized. The math is simple; the more people who watch a video, the more ad revenue it generates. Paying a small fee to buy traffic for a video seems like a great investment.

The truth, however, can be far more costly. 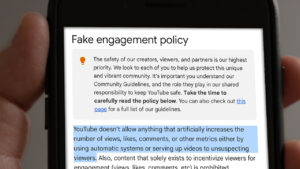 YouTube doesn’t allow anything that artificially increases the number of views, likes, comments, or other metrics either by using automatic systems or serving up videos to unsuspecting viewers. Also, content that solely exists to incentivize viewers for engagement (views, likes, comments, etc) is prohibited.

YouTube has algorithms in place to ensure that traffic to a channel occurs through natural viewer behavior. Each view is analyzed through these algorithms before contributing to a channel’s view count. Views that are considered artificial are removed.

Some of the practices prohibited by this policy include:

An example of a violation may be a video with a two-hour runtime labeled as the newest Transformers film, only to be a still screen image advertising a link in the description to a pirated movie site. The viewer was deceived by the video’s content, which also promotes an illegal service. 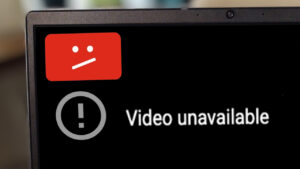 The penalties for a channel in violation of the Fake Engagement Policy can be devastating. A video found in breach will likely be removed and a warning may be issued if this is the first offense. Further violations may result in content strikes against your channel. A channel that receives three strikes within a 90-day period will be terminated and shut down permanently.

There can be other negative effects even if you don’t receive a violation notice or a strike. View-boosting services–particularly the cheap ones–will typically use bots to artificially increase views or submit a link to a pool of individuals paid to click links and watch just long enough to count as a view (30 seconds as of the time of this article).

Any interaction the algorithm determines to be from bots will be automatically removed and not counted towards monetized views. This process can sometimes take up to 48 hours. If a service was used to boost a video by 40,000 views…the analytics may reflect that for a day or two but once the algorithm determines they are fraudulent, the view count will drop back to its previous status.

Additionally, the success of the video isn’t measured by the number of views it receives, but rather by the level of engagement from the viewer. Audience retention, interaction with cards, and watching further videos through end screens or playlist recommendations carry far more impact on your video’s performance than the number of views.

The reason is simple. The longer the audience stays on your channel, the more advertisements YouTube can show them.  Longer engagements result in your video being recommended to more viewers. Videos with low interaction or have artificial views will find themselves suppressed by the algorithm. 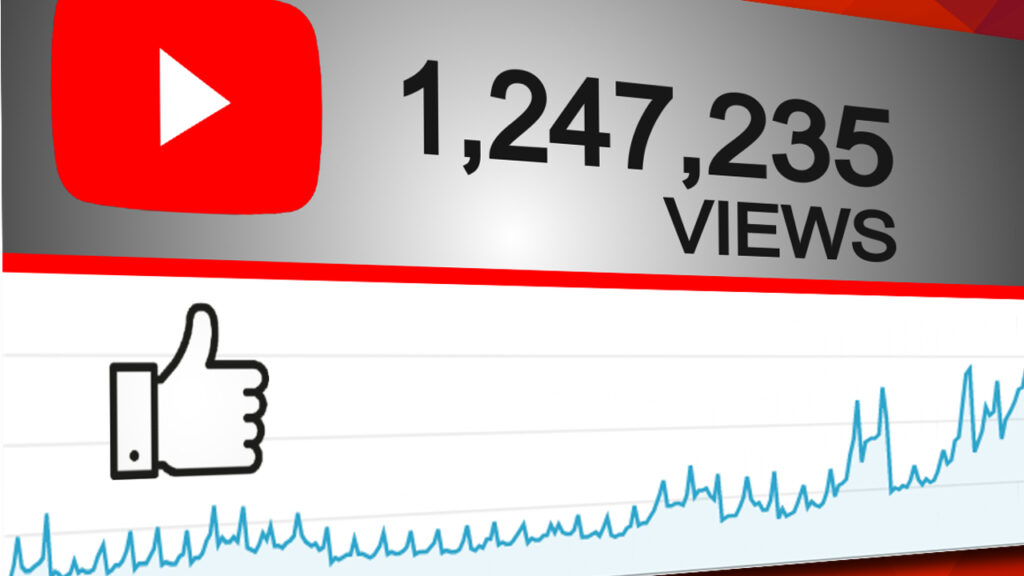 This doesn’t mean you can’t delegate work. There are agencies that will promote and support your channel, but do your homework, read reviews, ask questions, and do your best to confirm they use compliant methods. Ultimately you will be the one penalized for any violations they incur.

You’ve invested a lot of time and effort into your channel. Don’t throw away long-term gains in lieu of short-term convenience.