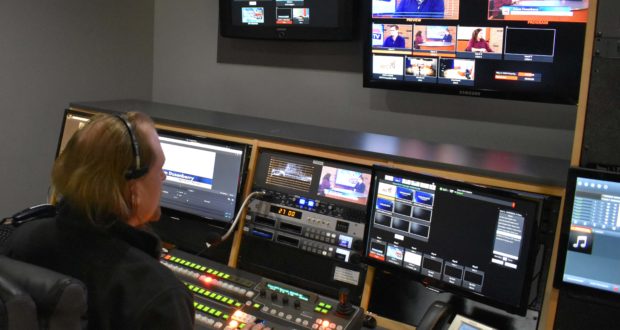 Adam Dusenberry, operations manager for WCTV, said the new install allowed a general “decluttering” of extra gear from the control room, including playback decks and an external CG. “Having one console to do graphics and video roll-ins makes it a whole lot more streamlined and easier to do in our environment,” he said.

All roll-ins and opens are stored in the BPswitch using its Watch-Folders media management system. Dusenberry said all shows have a dedicated folder; producers upload their assets from an NLE using the integrated BPNet™ cloud-based video workflow service. “The goal is to make it as easy and streamlined for our producers as possible,” he added.

Graphics are produced with the built-in NewBlueNTX multi-layer 3D motion graphics CG, which has improved the on-air look and saves at least one producer from adding specialized closing credits in post. WCTV also uses the integrated BPview™ customizable multi-view, which feeds four monitors in the control room, including two main monitors on the wall and two smaller monitors in the production console dedicated to graphics and the technical director.

The new BPswitch replaced a Blackmagic Design ATEM switcher. “We’d been pushing the envelope on production quality and outgrowing the capabilities of the ATEM,” Dusenberry explained. “We wanted to add more, but we also wanted it to be user friendly. The BPswitch fit what we were looking for – there’s an improvement both in usability and how our programs look to our viewers.”

WCTV offers hyperlocal coverage of events, government meetings, and education programs. The station operates three cable channels that are distributed through Comcast and Verizon, well as a website with live streaming and video-on-demand. WCTV maintains an active production schedule in its three-camera HD studio, with a handful of series as well instructional workshops for its active youth program, promotional videos for local organizations, and other shows.

“I will push a piece of gear to its limits,” Dusenberry said. “I always want to try and push for the production values that will make our programs look similar to the major networks. The BPswitch really makes that easy to do.”

About Broadcast Pix
With a tightly coupled switcher and 3D motion graphics CG, Broadcast Pix provides the most fully integrated live video production systems with patented control and automation technology. From compact units to large-scale, multi-system solutions, every Broadcast Pix features an extensive toolset that makes it easy to optimize and customize your workflows locally and over IP. Plus, its BPNet ecosystem provides secure cloud services and asset management. Founded in 2002, Broadcast Pix has customers in more than 100 countries and is the leader in fully integrated production switchers for government, broadcast, streaming, live event, and visual radio applications. Learn more at www.broadcastpix.com.