MILAN, FEBRUARY 23, 2016 – When Vincenzo Vitale, Sound Engineer/Project Manager, and his team from RAI radiotelevisione italiana, Italy’s leading television company, were given the challenge of providing RF coverage over the vast area of the World’s Fair Expo Milan, he had to turn to a pool of companies bidding to take on this challenge. The only company able to provide Vitale with everything he required was Wisycom, designer and builder of the most sophisticated RF solutions for broadcast, film and live production. 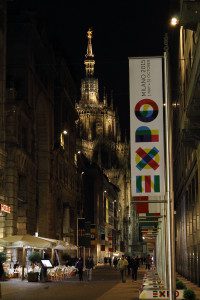 The World’s Fair 2015 was held just northwest of Milan’s city center under the theme Feeding the Planet, Energy for Life. It was the first world’s fair with a food theme and featured areas that allowed countries to address food concerns of the world.

Vitale is quite familiar with Wisycom, as his team regularly uses the company’s equipment to build special high quality installations where the complexity, extension of the venue and location of the sets don’t allow for an OB-Van to cover all the needs.

“Wisycom was ideal for this massive project because its devices are made especially for broadcast with high-functionality and build quality standards,” says Vitale. “Wisycom knows it takes special attention to set up an installation of any size. This antenna distribution we used at the World’s Fair Expo, allowed us to expand the coverage of many of our devices from different manufacturers while providing us the control to use a portion of the coverage areas.

Vitale used Wisycom systems together with intercoms from Motorola and Tait. The Wisycom devices allowed the intercom receivers to be distributed to the entire area, allowing their range to be significantly increased. By using analog systems, Vitale was able to cover the expo’s large area, which wasn’t an easy task without crossing the legal limits in terms of electromagnetic pollution.

“Flexibility, quality and attention to small details makes Wisycom a great company,” adds Vitale. “This World’s Fair Expo was a very challenging and complicated project that was a great success thanks in part to Wisycom. We will definitely continue to use Wisycom on future projects (including three national networks and 22 multimedia channels for the Rio de Janeiro summer games), thereby ensuring the same reliability and functionality for our clients.”

About Wisycom
Wisycom is a designer and builder of the most sophisticated RF solutions for broadcast, film and live production, renowned for their durability, flexibility, reliability, practicality and cost-effective price points. Wisycom’s design process is driven by attention to detail, customer feedback and ultimate quality, from the selection of components to the manufacturing process, which takes place at the company’s Italian plants. The company prides itself on serving as a technical advisor and partner to every customer. From custom design to evaluation and dimensioning of systems, the Wisycom team stands by its customers through every step of the process. For more information, please visit www.wisycom.com.