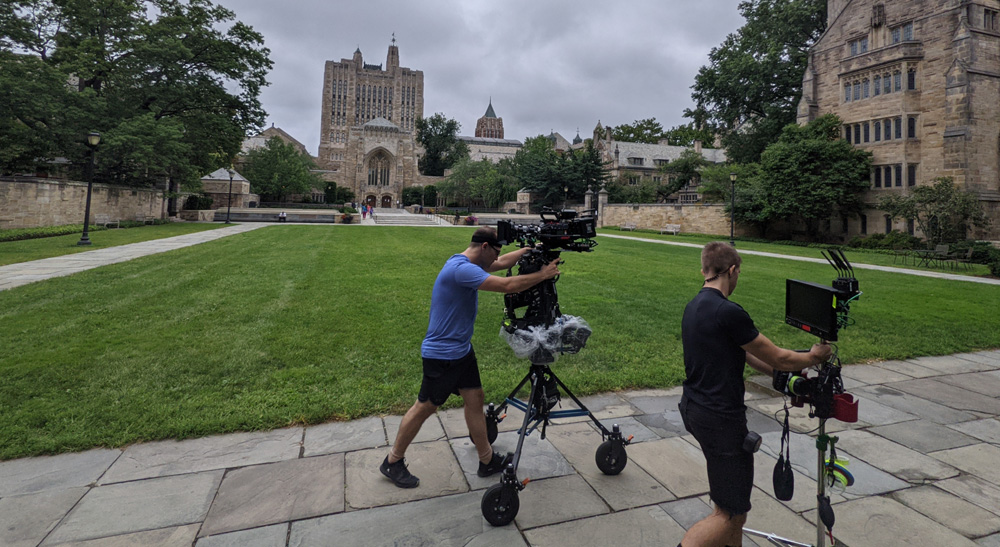 Fremont, CA – May 11th, 2022 – Blackmagic Design today announced that the recent “Yale Opens Doors” set of videos, as well as a number of other marketing videos for the Ivy League school, were shot using Blackmagic Design URSA Mini Pro 12K digital film camera. The videos were part of a wider fundraising program and highlighted the historic architecture of Yale University, as well as the various landmarks on and around campus.

Yale University ranks among the top universities in the world. Its campus in New Haven, CT contains some of the world’s most amazing examples of collegiate gothic and gothic revival architecture, including many buildings, gates and massive doorways. The school prides itself on opening up doors for its students and alumni, which include Presidents, Nobel Prize winners, Supreme Court Justices and more.

To help launch the For Humanity campaign, Yale University hired Director B Kelley of bRandom Media, alongside Producer Meghan Doherty, to film 12K and 8K footage of the school’s architecture, with a focus on the school’s famous doors and gates.

“The architecture of Yale is special. Sweeping and gothic. Shooting in 12K with the URSA Mini Pro 12K helped to capture that grandeur,” said Kelley.

“The camera’s footage is incredibly easy to work with and being able to get a beautiful 4K, 6K or 8K image out of a single shot, no matter where in the image, is incredibly helpful.”

The project included 28 videos. The “Yale Opens Doors” video, shot to be displayed on a 36 foot LED wall, was captured in 12K and finalized in both 12K, 8K and 4K in order to future proof the video and provide a variety of formats for different screening venues. Another 10 of the videos were shot with three cameras each, with the URSA Mini Pro 12K used for 12K wide shots. By shooting in 12K, Kelley and Doherty had the ability to get perfect 4K and 8K images in a single shot, while still having full 12K images for later use in the project.

Kelley has directed for a variety of clients, most recently Peloton and Chase Sapphire. Their other work includes specialty camera work, such as underwater, on films such as the upcoming “Fire Island,” and the just released “Sugar Plum Twist.” In the past, Kelley worked with a range of Blackmagic products as a DIT on hit films such as “Werewolves Within,” TV shows such as “Bill Nye Saves the World,” and several longer form projects for Spotify and Google.

The final pieces shot for Yale were shown at a hybrid live and online event, as well as online, campaign launch in early October. They were also used on Yale University’s fundraising website, showing live panel discussions with famous faculty and alumni discussing engaging and pertinent topics in their fields.

“This shoot was a great test to see how we could benefit from getting 12K images. Not only was being able to use different parts of each image without reshooting for new formats a huge help, but the camera has amazing color science and was easy to set up and move around. Working with Blackmagic RAW footage was simple and we could set up and break down the camera set up easily to adjust to whatever the customer needed,” finished Kelley.

Press Photography
Product photos of URSA Mini Pro 12K, as well as all other Blackmagic Design products, are available at www.blackmagicdesign.com/media/images.