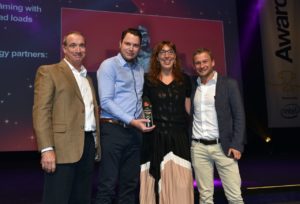 “Today’s viewers are rapidly moving online and growing used to video with lighter ad load,” said Tim Sewell CEO of Yospace. “Medialaan took the bold step to prioritise the OTT user experience over short-term advertising revenue potential. Long-term, its advertising will command a premium because it is targeted to the individual.”

Viewers watching live channels on Stievie can rewind the live stream. What makes this solution unique is that, in startover mode, commercial breaks are made shorter by tailoring the spots to the individual, and breaks that have already been seen are made skippable, so the viewer can catch up with the live action.

While the amusing video describing the system to the audience at the IBC Awards Ceremony showed an infinite number of monkeys making the advertising selections for each viewer, the solution in fact depends upon the Yospace server-side ad insertion platform (SSAI). The result is a fully personalised, end-to-end stream management.

“Medialaan is absolutely delighted to win an IBC Innovation Award, surely the most prestigious prize in broadcast engineering,” said Peter Coucke, solution architect at Medialaan. “I would like to thank Yospace for developing a truly ground-breaking, viewer-first solution for live monetisation, and IBC recognising what is a very forward-thinking project.”

Michael Lumley, chair of the international panel of judges which selected Medialaan as one of just nine finalists across three categories, added “This year’s IBC Innovation Awards shortlist is a real global snapshot of the cutting edge of our industry, with all the hot topics of the moment represented, and entries from practically every corner of the globe. To make it to the final – and to win at IBC – is a tremendous achievement. Congratulations!”

The picture shows (left to right) Jim Greene from the network platforms group at Intel (sponsors of the awards ceremony) who presented the award, with Pieter Coucke and Petra Liesmons from Medialaan and David Springall from Yospace.

Yospace is the foremost provider of server-side dynamic ad insertion (SSAI) technology in the world today.  Its solution allows live streams and on demand (VoD) content to be monetised for OTT in a way that is true to the seamless viewer experience of linear television, while opening up benefits of digital advertising such as one-to-one addressability and real-time measurement.

Yospace was the first to publicly demonstrate SSAI in a live stream, with ITV in 2012, and today services major broadcasters and network operators across the globe, including AT&T in the US; Sky Media, ITV, BT Sport, Channel 4 and STV in the UK; Telia and TV4 in Sweden; SonyLIV in India (in partnership with Akamai Technologies); Seven West Media and Network Ten in Australia.