Groundbreaking display will envelop City Hall in sound and 3D imagery in the culmination of The Music Center’s annual New Year’s celebration.

HOLLYWOOD— On New Year’s Eve, Los Angeles residents will have an opportunity to witness one of the largest 3D digital mapping displays in Los Angeles history. As part of The Music Center’s 2nd Annual Grand Park’s N.Y.E. L.A. event, L.A.’s historic City Hall will be transformed into a towering digital sculpture.  With content conceived by Garson Yu, artistic director of the award-winning design studio yU+co, in collaboration with the Grand Park team, the spectacular multimedia display will combine cutting edge 3D projection mapping, interactive sound, and  a powerful narrative celebrating Los Angeles, its culture and its people.

“We were excited by the creative challenge of applying traditional design and story elements to site-specific building architecture,” says Yu. “Most architectural projection mapping consists of a passive display on the building’s surface. We are going beyond that by melding narrative components and interactive sound to produce a rich cultural experience that Los Angeles has not seen before.” 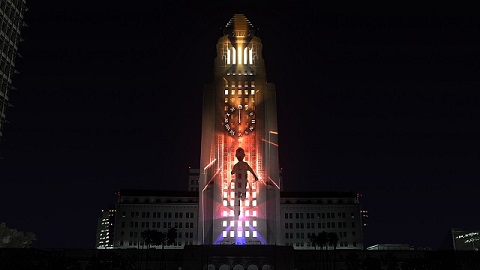 The centerpiece of the presentation will be an inspiring 10-minute narrative film, written and directed by Yu and the Grand Park team,  immediately preceding the countdown to midnight. Mapped to the south and west walls of the City Hall tower, the 3D film will present a breathtaking and highly personalized tour of Los Angeles from the point of view of a child. “The story centers on the everyday life of Angelenos; things that surround us, but that we don’t often notice,” says Yu. “It evokes the experiences that connect us to one another and to our city.”

During the five hours leading up to the countdown to midnight, yU+co will transform Grand Park into a vast audio/visual playground as City Hall is enveloped in a mesmerizing blend of computer animation, visual effects, live action cinematography and time-lapse imagery. Themed “The Heartbeat of L.A.,” the display will incorporate interactive sound as visuals react playfully to both the voices of the crowd as well as music spun by DJs and played by local bands in the park.

Spanning the top 22 stories of City Hall, it will be the tallest interactive sound display ever produced in Los Angeles. “The interactive projection mapping explores the relationship between visuals, light, sound and the public audience,” explains Yu. “We will translate music into a visual score, a seemingly endless and ever-changing light symphony.”

yU+co originally gained prominence in Hollywood for its innovative work in designing main titles for movies and television. Since then, the studio has expanded its repertoire into other areas of design, visual communication and experiential media. Last year, Garson Yu earned critical and public acclaim for his groundbreaking public art installation The Interactive New York (T.I.N.Y.) featured at New York’s Pier 57. 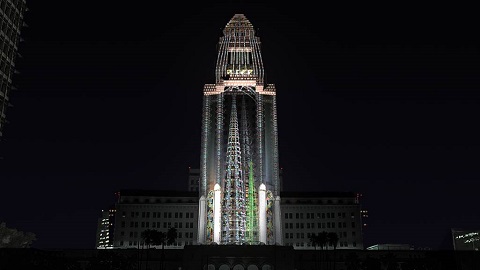 The studio’s work in Hollywood and beyond caught the eye of the organizers of the Grand Park event. “Garson and yU+co excel in design artistry and short-form narration,” says Grand Park Programming Director Julia Diamond. “We saw that in their main titles for Oz, The Great and Powerful, Life of Pi and many other films. They know how to tell stories that instantly captivate an audience. That was very important for this project.”

Carol Wong, VP/Executive Producer of yU+co says that the scale and complexity of the project, it’s unusual format, and its use of emerging audio, visual and projection technologies inspired the studio’s designers, artists and producers. “We were thrilled to take on the challenge of filling a 3-dimensional vertical canvas standing 22 stories high,” she observes. “It gave us an opportunity to apply our technical and creative skills in a new and dramatic way. The passion and energy that our team brought to the task is clearly evident in the results.”

About yU+co
Since its inception, yU+co. has evolved from a design studio specializing in film title sequences to a global award-winning multi discipline creative firm that offers design and production services for feature films, television, commercials, gaming and new media. Our story-driven approach to design inspires marketing solutions that engage consumers with brands and captivating narratives that entertain viewers across multiple digital platforms.

With offices in Hollywood, Hong Kong and Shanghai, yU+co. boasts an international talent roster that includes directors, designers, producers, animators, writers, programmers and visual effects artists. The diversity of our talent pool creates a wellspring of cross-cultural ideas and experiences that adds depth and originality to every project we work on. For more information go to www.yuco.com.