Analog vs Digital Audio: the debate rages on…

From the earliest days of the electrical broadcast transmission of sound, there has been a sound engineer to ensure its occurrence.  In fact, many of the original sound engineers were electrical engineers, because electricity happened to be the medium of the time.  Of course, later on, needle-bearing recording devices (that produced records) appeared, recording sounds as needle vibrations onto a disk.  (Electricity is incidental to this process, but is a convenient way to provide magnetism).  Later, magnetic tape took the place of records, placing the same sound signal onto this new media.  Both of these methods (disks and tape) are considered “analog” techniques.  But what is “analog?”

The Merriam-Webster Online Dictionary defines the word “analog” as: “of, relating to, or being a mechanism in which data is represented by continuously variable physical quantities.”  Sound, as it is heard for example, is a natural analog signal.  An analog signal is continuous; this means that it occurs without any breaks or interruptions.  Digital signals, on the other hand, are not continuous; they use a series of 1’s and 0’s to represent the sound as information.  Digital sound is represented by a series of those values which signify pitch and volume. 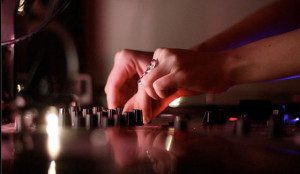 Since all sound is analog, and we hear sounds in analog, an analog recording is, arguably, the most faithful-sounding to the original.  The biggest disadvantage of an analog format is that analog media wears down over use.  Recording disks and magnetic tape loses quality each time it is used or played after the initial copy.  This means that the performance could become inferior in sound or even be lost over time.  A big advantage digital media has over its analog counterpart is that many copies of the original sound file can be made without losing any quality; each will sound as good as the original.  One digital recording can make an infinite number of digital copies without the threat of losing any sound in the copies.

Broadcast engineers, of the variety used to working with analog signals, mostly believe that the old way of calibrating an electrical wave to record sound is superior to a signal recorded digitally.  Computer or IT technicians, on the whole, go with the digital way as being the best.

Audiophiles, or people who love sound, are divided as to whether an analog or digital recording is better.  On one side are those who argue that you need every little sound to complete the effect of a performance in order to draw-out an “as-if-you-were-present-at-the-original” experience.  On the other side are those who believe that a computer and its multiple sampling functions can reproduce anything that can be recorded in an analog format.

Which is better – an analog recording or a digital recording?  Since humans can hear sounds ranging from 20 hertz (Hz) to 20 kilohertz (kHz) [source: Hyperphysics], every slight nuance of sound can be heard.  An analog recording picks-up each of these nuances and they are there for the next person or audience to hear.  The most accurate recording would thus be one that would record ALL of the sounds happening at a particular moment which might, in the case of a musical rendition, include a musician’s breathing between notes.  A digital recording would exclude any non-musical sound and miss that tiny subtlety.  Why would this be important, you ask?  It all has to do with fidelity.

“Fidelity” is faithfulness.  Unless a person or audience can hear what has been recorded as if they were there for the original, it is not a faithful reproduction.  Some feel that a computer is not capable of capturing enough 1’s and 0’s to represent the actual (or analog) sound as a recording disk or magnetic tape can.  Some believe that they can tell the difference between a digitally-recorded sound and an analog-recorded sound.  The truth is, with today’s technology, it is nearly impossible.  What is heard (or not heard) are the “human bits” that are comprised of the sounds we humans generally ignore – the cave-like echo of a sound booth or a musician’s breathing.  Or even, perhaps, that slightly different sound the musician made while playing an instrument.  This can be referred to as the “earthy” or “organic” quality of a recording – something audiophiles thinks are missing from digital captures.

The difference between analog and digital has been described by record producer George Martin in his book Making Music: “Ordinary [analog] recording stores the electrical impulses (which have been converted from the pure aural vibration by the microphone) on magnetic tape as magnetic variations in the coating. Digital recording, on the other hand, analyzes the frequencies constantly and stores the information as binary code on tape. If you can imagine `stop-framing’ a slice of sound, analyzing it in terms of frequencies, converting the information into numbers to store on tape and doing that 50,000 times a second, that is what a digital recorder does. And on playback, a reverse process takes place.”

So, which is better – digital or analog?  It’s a tie.  It’s totally subjective, and only determined through personal opinion.   One thing is for certain, however: Old-school broadcast engineers are a dying breed, being replaced by those in the “digital know.”  But new IT and computer-based digital experts beware – in order to be an effective sound engineer of today (and into the future), analog knowledge of the past had better be a part of your understanding, as a truly effective sound technician must have the best of the two worlds – both analog and digital strengths.