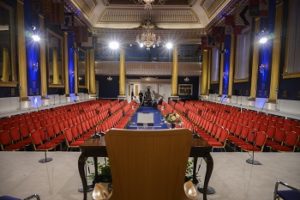 Exceptional sound quality and aesthetically pleasing design were the key reasons why DPA microphones were chosen to provide amplification during the Inauguration of Michael D Higgins who was recently sworn in for a second term as the President of Ireland after re-election in October with 56% of the vote.

This prestigious event, which was held in the State Apartments of Dublin Castle on November 11, was attended by more than 300 people including former presidents Mary Robinson and Mary McAleese, the Taoiseach (Irish prime minister) Leo Varadkar and Tánaiste (deputy prime minister) Simon Coveney.

Ion Solutions, a leading provider of professional Audio-Visual and Broadcast Technology Systems in Ireland, was tasked to supply the sound systems for the Inauguration by the Office Of Public Works.

Ciarán Moen, who heads up Ion Solutions’ rental business, says: “We chose DPA as our microphone partner because we have worked with the company in the past and know that the sound quality of DPA microphones was easily up to this challenge. As this was such a significant event, it was important to the Office of Public Works that the microphones should also look pleasing in this very prestigious venue. DPA’s podium microphones fitted the bill perfectly because their design is very sleek and sophisticated.”

Ion Solutions specified four d:sign™ 4098 gooseneck microphones mounted on table stands. The directional (supercardoid) polar pattern of these microphones, combined with their natural sounding off-axis response, ensures that they deliver exceptional spoken word clarity while still attenuating ambient noise. Ion Solutions also installed four slimline directional Modular Active Booms, each fitted with a 4018 Supercardioid capsule. These were positioned at the front of the room and used by a wide range of dignitaries including Christian, Jewish and Islamic religious representatives who opened the inauguration ceremony with prayers.

“The State Apartments of Dublin Castle have very high ceiling so we needed microphones that could cope with the room acoustics,” Moen adds. “Also, the success of this event depended on the speakers being clearly heard and understood. The DPA microphones delivered on both counts, giving consistently clear audio that could be heard throughout the room. Everyone was very happy with the results.”

Ion Solutions has an extensive stock of DPA including many d:vote™ 4099 Instrument and d:fine™4266 Headset Microphones. After the Inauguration ceremony its 4098s were immediately sent out on another rental – this time to the Fine Gael Party Conference, which also took place in Dublin.